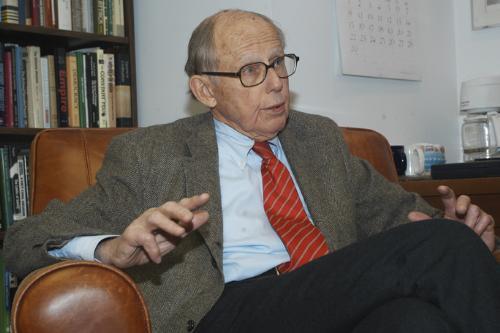 Weatherhead University Professor Samuel P. Huntington, no stranger to controversy during his long career, has already been assailed for his forthcoming book, <i>Who Are We</i>.
By Daniel J. Hemel, Crimson Staff Writer

Over the years, critics of political scientist Samuel P. Huntington have called him a fascist, skewered him as a war criminal and bombed his Harvard office.

Now, with Harvard students and faculty accusing him of xenophobia, Huntington, who is Weatherhead University professor, remains unfazed.

In the March edition of the magazine Foreign Policy, Huntington—who is also chairman of the Harvard Academy of International and Area Studies—warns that a tide of Mexican immigration to the U.S. is undermining “our Anglo-Protestant culture.”

“Unlike past immigrant groups, Mexicans and other Latinos have not assimilated into mainstream U.S. culture, forming instead their own political and linguistic enclaves...and rejecting the Anglo-Protestant values that built the American dream,” Huntington writes.

Huntington’s latest book, Who Are We, is slated to be published in May, but the excerpts printed by Foreign Policy have already sparked a flurry of criticism on campus.

“He is discrediting an entire ethnicity as problematic to the U.S.,” she says. “He is creating a culture of intolerance.”

Rudenstine Professor of the Study of Latin America David L. Carrasco wrote in an e-mail to The Crimson that he “prefers to wait until the full text is available before passing a full judgement, but if these excerpts are representative, the book appears to present a mediocre study, at best.”

Professor of Education and Social Policy Gary A. Orfield calls Huntington’s essay “a disgraceful example of the kind of anti-immigrant attitudes that appear recurrently in American history.”

But Huntington dismisses the attacks.

TOMATO SOUP FOR THE SOUL

Who Are We, according to Huntington, “is not a policy-oriented book,” but rather a work aiming to spark “national discussion and debate” over immigration.

He says that America’s ideals of liberty are deeply rooted in the country’s cultural heritage.

“Would America be the country that it had been and that it pretty much still is today if in the 17th and 18th centuries it had been settled not by British Protestants but by French, Spanish and Portuguese Catholics? The answer is, no, it wouldn’t. It would be Quebec, Mexico or Brazil,” Huntington says.

He says the cultural transformation spurred by an influx of Mexicans “wouldn’t be the end of the world for America as a society, but it would be the end of American society as it has been.”

Huntington proposes a revision to the “melting pot” metaphor that has long been used to describe the assimilation of immigrant communities.

“It’s more useful to think in terms of tomato soup. The base of the tomato soup is the aboriginal Anglo-Protestant culture,” Huntington says.

He says the influx of immigrants is “like adding onions and croutons and parsley and spices to tomato soup, all of which make it much richer and more interesting.”

Huntington says Mexican immigrants have staked a territorial claim to the American Southwest—which Mexico controlled prior to 1848—in what he characterizes as a “reconquista,” or re-conquest.

“They view it—legitimately—as their turf, in some sense,” Huntington says.

In the most controversial portion of his article, Huntington—citing observations of Texas entrepreneur Lionel Sosa—highlights what he says are debilitating traits prevalent among Hispanic immigrants: “mistrust of people outside the family, lack of initiative, self-reliance, and ambition; little use of education; and acceptance of poverty as a virtue necessary for entrance into heaven.”

In the Foreign Policy article—headlined “Jose, Can You See?”—Huntington casts doubt on the notion that Mexicans will follow the path of upward mobility traced by earlier immigrant groups.

“There is no Americano dream,” Huntington writes. “There is only the American dream created by an Anglo-Protestant society. Mexican-Americans will share in that dream and in that society only if they dream in English.”

But scholars vigorously dispute Huntington’s argument that the American dream is inextricably linked to Anglo-Protestant ethics.

“There’s a difference between Anglo-Protestant principles and the American dream,” says Kresge Professor of Marketing Rohit Deshpande. “Latinos have made it in America, and they’ve done it their own way...You can speak Spanish at home and watch novelas on Univision, and be in fluent in English and very successful at work.”

“It is true that our country was founded and dominated by white Anglo-Saxon Protestants, many of whom were literate, democratically inclined on good days, and adept at making money,” Gutman Professor of Latin American Affairs John H. Coatsworth wrote in an e-mail to The Crimson.

“But many of their customs and beliefs were truly horrifying—witch burning, slavery and segregation, killing off Native Americans and stealing their lands. They had no clothes sense, couldn’t dance to save—or lose—their souls, and never ate garlic,” Coatsworth says.

Huntington says his book “benefitted immensely from the comments and criticisms” of students in his fall course Government 1582, “Who Are We? Issues of American National Identity.”

In the class, Huntington engaged his students in a “healthy and contentious discussion” on immigration, says Angela A. Amos ’05, a social studies concentrator in Cabot House who took Government 1582 last semester.

“His speech often indicated a lack of political correctness, but I usually attributed that to his age,” Amos says. “When he phrased things forcefully, he encouraged people to speak up.”

But Maribel Hernandez ’04, a social studies concentrator in Winthrop House, says she was “really upset” by Huntington’s rhetoric in the course.

“It’s very hard to sit there in a class when you—not personally but you as a Hispanic—are being attacked,” Hernandez says.

Hernandez, who immigrated from Mexico at age 13, says she and three other Hispanic students in the class met with Huntington at the Faculty Club in December to discuss their concerns. “We never felt that he was receptive,” she says. “At this point, he has his views, and he’s not going to change them. It seemed like you were talking to the wall.”

“Sam is a man of strong, well-articulated and firmly-defended views...I have never had occasion to doubt his intellectual integrity and open-mindedness,” Putnam says.

Huntington has been no stranger to controversy in his four decades at Harvard.

After traveling to Vietnam in 1967 as an adviser to the Johnson administration, “I came back and wrote a report that was one of the more devastating critiques of what we were doing at that point,” Huntington says.

But Huntington’s association with the war effort provoked the ire of more than a few activists.

In 1967, The Crimson printed an advertisement accusing Huntington of genocide.

Huntington initially garnered national attention in 1957, when his first book, The Soldier and the State, was branded by reviewers as a fascist diatribe. “The leading professor in the Harvard government department at the time, Carl Friedrich, was a refugee from the Nazis. And he very mistakenly thought I was making an argument for authoritarianism, which wasn’t true at all,” Huntington says.

Friedrich quashed Huntington’s prospects at tenure, prompting Huntington to return to New York City, where he was born in 1927, and teach at Columbia University.

“And then Harvard saw the error of its ways in 1962 and asked me to come back,” Huntington says.

In 1968, Huntington served as a top foreign policy adviser to Vice President Hubert Humphrey, who was then vying with Richard Nixon for the White House. That summer, he and longtime pal Henry A. Kissinger ’50 vacationed in Martha’s Vineyard. Kissinger—who had worked for Nelson Rockefeller in the New York governor’s primary bid against Nixon—casually offered to leak Huntington Rockefeller’s secret files on Nixon, Huntington says.

He adds that Kissinger soon retracted the offer and signed on as an aide to Nixon, who won the election.

A decade later, Huntington joined the Carter administration as a senior National Security Council official. But after serving on an advisory panel in the late years of the Reagan presidency, Huntington—who says he supports Sen. John F. Kerry’s 2004 candidacy—acknowledges that his days in the political world are almost certainly over.

“Kerry doesn’t need me...He knows what the issues are. He’s been much more deeply involved in foreign policy issues than I have. He ought to advise me on foreign policy,” Huntington says.

But even since he left the public sector, Huntington’s analysis has dominated foreign policy discussions.

In the summer of 1993, Huntington argued in the journal Foreign Affairs that “the fundamental source of conflict in this new [post-Cold War] world will not be primarily ideological or primarily economic. The great divisions among humankind and the dominating source of conflict will be cultural.”

This argument, crystallized in his 1996 book Clash of Civilizations, has drawn the attention of top Bush administration officials. Huntington says he shared his observations with Secretary of State Colin L. Powell over lunch in Washington last month.