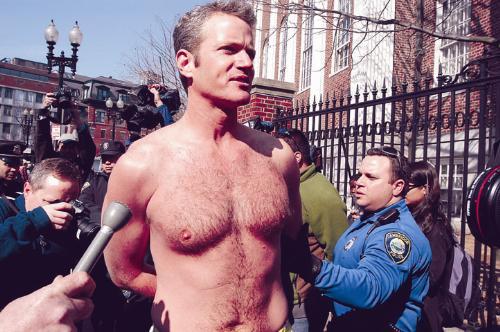 Dan Mathews, vice president of People for the Ethical Treatment of Animals, is arrested in the Square yesterday with five other protestors, including a Harvard student. Chanting “Fur out, love in,” Mathews avoids the media.
By Faryl Ury, Crimson Staff Writer

Wearing nothing but colorful underwear and strategically placed tape, one Harvard undergraduate joined five similarly clad representatives from the People for the Ethical Treatment for Animals (PETA) in a protest in Harvard Square that ended in the arrest of all six participants on misdemeanor charges.

According to Cambridge Police Department spokesperson Frank D. Pasquarello, the five PETA affiliates and the undergraduate, Kristin M. Waller ’05, were charged with disorderly conduct and indecent exposure. They were released last night on $40 bail and will be arraigned today.

As part of their “Rather go naked than wear fur” campaign, PETA staged the protest to raise awareness of the treatment of animals on fur farms. As other PETA employees passed out leaflets criticizing animal abuse, the six near-naked protestors posed for the massive crowd of students, press, police and local residents, while attempting to recreate a 1960s “love in.”

The protesters held teddy bears and heart shaped signs in front of their bodies and staged a pillow fight on a mattress outside the Harvard T station, all while chanting, “Love in, Fur Out.”

Mathews was scheduled to speak yesterday in Religion 1529, “Personal Choice and Global Transformation,” taught by Lecturer on the Study of Religion Brian C.W. Palmer ’86, but could not attend because he was still under arrest.

According to Pasquerello, Cambridge police were on hand for crowd and traffic control and made arrests based on their observations of the protestors’ actions.

But Mathews, who said the city repeatedly denied his requests for a protest permit, said the protesters were misled by police.

“They told us to move on from the Square but I asked the officer if we could cross the street and as soon as we crossed the street, they came up behind us with handcuffs,” he said.

Mathews said the protestors “weren’t breaking any laws,” only trying to raise awareness.

“At the end of the day, this is a free country and we have to be able to peacefully protest,” he said.

Speaking from his phone in a Cambridge jail cell, Mathews was optimistic about his situation and said PETA lawyers are examining the case.

“[The cell is] nothing compared to the disgusting cages on a fur farm,” he said. “It is a small price to pay.”

Calling the arrest “unwarranted,” Mathews—who has held similar events in cities such as London, Paris and Los Angeles—said he has never encountered similar problems with police previously.

“[It’s] a bit puzzling,” he said. “We have done these all over the world and there has never been a problem with the law before.”

Though the protest’s unique nature attracted a lot of attention, several members of the crowd commented on the disproportionate media and police presence in comparison to the relatively few protestors.

Several observers admitted that they weren’t there for the issues.

“I’m expecting some naked people,” said one local construction worker, who spoke on condition of anonymity because he said he was supposed to be working.

Anne D. Conlin ’07 criticized the spectacle nature of the event.

“If they want to bring in people from the mainstream to their cause it can be better done with persuasive data than naked antics in Harvard Square,” she said.

Mathews defended the group’s methods as unfortunate but necessary.

“Anything that gets people talking about issues is effective,” he said. “It’s a shame that we have to go to such lengths, but if we had been clothed and holding up pictures of animals being electrocuted on fur farms, there wouldn’t have been such vast public interest. Or jokes on Saturday Night Live.”

Palmer said he was surprised by the amount of media and police attention the event attracted, but said that this indicated its effectiveness.

“If it gets to hundreds of thousand of people via the news, that accomplishes something,” he said.

Palmer attended the protest, but kept his clothes on.

“I felt as the teacher of the course I should keep a respectful distance,” he said.

At the 3 p.m. lecture for Religion 1529, Palmer drew laughter from the full auditorium when he questioned what threat naked people pose to national security, and what crime would have warranted the protestors’ arrest.

“Mathews is not here because the police are having trouble thinking of what the charges should be,” he said.

Noting his students’ disappointment at Mathews’ absence, Palmer said he hoped that the PETA leader would appear before class concluded.

“As you know, for our visitors we don’t pay travel expenses. Or bail,” Palmer joked.

Undergrads who squeezed into the Science Center lecture hall said they wished they could have gotten Mathews’s perspective on the day’s event.

“I was really excited to see him, especially after the class readings,” Sandy L. Ullman ’07 said. “It seems Dan Mathews has this charisma, so I am really disappointed.”

Mathews said he would be happy to reschedule an appearance before Religion 1529, which with an enrollment of 587 students is one of the largest courses at the College.

In addition to Waller and Mathews, the others arrested yesterday were Aryenish Tiraz Birdie, Amy Thomson, Brandi Valladolid and Karla Waples. Mathews said all four were PETA employees or interns.