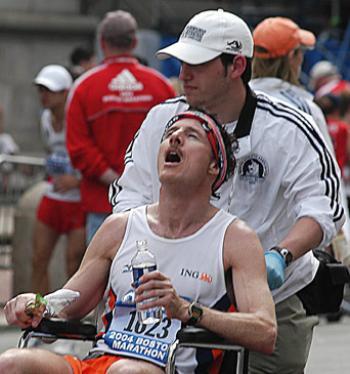 A strong and sweaty brigade of runners dressed in everything from superman costumes to hula skirts to skimpy speedos pushed their way through walls of cheering fans towards the Copley square finish line in yesterday’s marathon.

Of the more than 20,000 runners officially registered for the 108th annual Boston Marathon, about 16,000 braved unseasonal heat to complete the 26.2 mile course.

But with the mercury rising to 85 degrees yesterday—nearly 30 degrees above average April temperatures—the heat slowed even the fastest and fiercest competitors.

Sporting a homemade Harvard t-shirt bearing her name, Jesse L. Maki ’04 was recovering from the race when she said that the past four hours had been a great way to finish out her senior year.

“This is really exciting,” she said, wrapped in a silver space blanket to keep warm. “I’ve been meaning to do this since freshman year but things like organic chemistry and the MCATs have always gotten in the way.”

After finally completing the course, she said she was looking forward to a long hot bath followed by a return to the senior bar night scene.

On his fifth marathon, Boston College graduate Kenneth R. Bereski—painted head to toe in red and gold—couldn’t picture an evening out.

“Right now I think I need to just collapse and find my parents,” he joked.

Though he described yesterday as the toughest of the races he has run, his red body paint drew cheers from the sidelines.

“It really got the crowd going,” he said.

But the spirited spectators, sporting hats and shirts with slogans like “Tom’s Athletic Supporter” and “Girls Run Wild,” weren’t enough to lift the spirits of all participants.

“This is the most horrible race I’ve ever been involved with,” said exhausted Quincy House Tutor John C. McMillian, who struggled with the sun and wind from the start of the marathon.

“You could feel the heat right away. It was defeating emotionally,” he said. “There was just no chance of having a good time.”

Though he began the morning with a healthy bowl of oatmeal in the Quincy Dining Hall, he said the day turned sour when another runner stepped on his toe at the start line.

“From the beginning it seemed like it would be a really long race,” he said.

Maki said that she started to run at the end of January and logged most of her miles on a treadmill at the Wellbridge gym.

She added that such a feat would not have been possible at the MAC.

Her other preparations included eating a huge plate of pasta the night before and drinking several quarts of fluids to keep hydrated.

“I actually had to pull over and pee at mile four,” she laughed.

Christpoher J. Catizone ’06 said he also stopped along the way.

“At one point I was dizzy and cold and I stopped sweating and began to find the old women around me attractive, so I pulled over and took a little break,” he said.

After quenching his thirst and eating an Oreo given to him by a young fan, Catizone said he felt rejuvenated.

But Oreos didn’t stack up to the boost he received at mile 13—which runs through scenic Wellesley College—where he described high fives from female fans as “the greatest inspiration of my life.”

And, according to Catizone, the ranks of supporters extended well beyond Wellesley.

“I was surprised that the line of fans was basically unbroken from mile 1 to mile 26,” he said.

Pausing on Newbury Street to snap photos with a group of Harvard students comprising her personal fan club, Maki agreed.

“Crossing the finish line, I saw how the marathon really makes Boston feel like a community,” she said.

But as Catizone approached the end of the course, things weren’t quite as clear.

”You turn the corner and see the finish line way off in the distance and you think you’re almost there,” he said. “But it was like a mirage that just wouldn’t get any closer.”