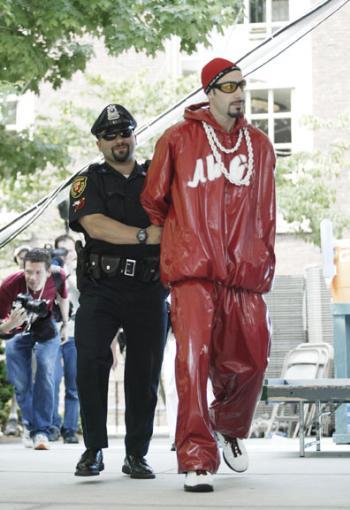 Class Day speaker Sacha Baron Cohen, better known as Ali G, is escorted back to the podium after his speech to receive an honorary membership in the Class of 2004.
By Simon W. Vozick-levinson, Crimson Staff Writer

The profane social satirist donned tinted goggles, several bejeweled chains, a bright-red beanie and a sweatsuit to match—with the dubious academic title “Professor of Erbology” emblazoned on its back—to turn up the heat on an already-sweltering crowd of graduating seniors and hundreds of friends and family in Tercentenary Theatre.

Frankly opining on topics including sex, drugs, race relations and higher education, interspersed with the occasional “respect” and “booyakasha,” Ali G fulfilled the promise of First Class Marshal Shaka J.D. Bahadu ’04 to “drop some serious knowledge.” His remarks ranged from the unprintable to the very unprintable, drawing laughter and more than a few raised eyebrows.

By speech’s end, the faux-urban hip-hopper was crying “Police brutality!” as a Harvard University Police Department officer handcuffed him beside Memorial Church.

Before his mock detainment, Ali—who, despite his sometimes dim-witted persona, is the Cambridge University-educated Sacha Baron Cohen off stage—was eager to display his own depth of knowledge.

“Fings like ‘apple’ and ‘orange’ don’t start with a capital letter unless they start a sentence,” he informed the audience of hundreds.

But the comedian, who has centered popular television series in America and Britain around inappropriate interviews with unsuspecting subjects, was quick to praise the Ivy Leaguers before him.

“You is the most cleverest students in America,” he said, noting later that he considers this country to be among the greatest in the world, behind Jamaica and Thailand.

Waving his hands in mock-gangsta motions, the comedian enthusiastically lauded the wide variety of academic specialties at Harvard—from students who are “good at counting,” to historians who can tell “what did Lincoln give America, except for the towncar,” to English concentrators who have “memorized the entire alphabet from A to X.”

Ali was particularly interested in students of the law, whose help he solicited in avoiding drug possession charges after claiming to have smuggled several ounces of “the finest Moroccan chronic” overseas in his gastrointestinal system. He also hoped medical students would help cure him of the ailments thereby caused.

And though, unlike recent Class Day speakers like Al Franken ’73 and Conan C. O’Brien ’85, Ali could not draw on his own memories of golden undergraduate years on the Charles, he demonstrated a remarkable knowledge of Harvard’s rich history.

In addition to the ease with which he dropped impolite slang, Ali showed that he was as comfortable dropping the names of famous Harvard graduates—including such luminaries as “Lyndon Baines Johnson, or as he is known, JFK,” “President George Clinton” and “that really fit honey from Star Wars.”

Of the three mangled names, only the last—perhaps better known as Natalie Portman ’03—actually attended Harvard.

Ali made the actress a special focus of his attention, suggesting at one point that he might be found later on in a hotel room encouraging her to “play with [his] light saber.”

Towards the end of the speech, he turned to the topic of race relations. Baron Cohen, who is white, has caught flak for drawing heavily upon racial stereotypes in the past.

“Some of you has probably never even seen a black man before,” he said. “Allo.”

“Like the great civil rights leader Martin Luther Vandross, I has got a dream of little black girls and little white girls playing with each other,” he added.

Ali also mimed a sexual act in the course of a discussion of the relative merits of a Harvard degree and a Lexus, which he said were of similar economic value.

“Bet you’re well glad you brought your grandparents, innit?” he asked with a grin at one point.

And despite frequent references to Harvard, Ali ended his speech on a discordant note.

“Big up yaself, Princeton!” he shouted in his speech’s extended conclusion.

THE REST OF THE MOST CLEVEREST

Though Ali G’s brazen commentary formed the afternoon’s centerpiece, he was preceded and followed by an array of student, faculty and alum speakers.

Dean of the College Benedict H. Gross ’71 previewed today’s Commencement proceedings and thanked everyone for coming out to see him.

“I am especially grateful to Ali G,” he kidded. “This man flew across the Atlantic Ocean just to hear what I had to say. Thank you, Mr. G!”

Bahadu, meanwhile, told “the extremely good-looking Class of 2004” of his own take on race at Harvard.

Bahadu said that in the last four years, he has been mistaken on campus for black celebrities including Will Smith, Denzel Washington and Justin Timberlake, who is caucasian.

“The dude’s got some soul, so he’s going to be an honorary brother,” Bahadu said.

The marshal went on to promise that Prince’s Purple Rain would be played at all subsequent 2004 reunions.

The ceremony also included the awarding of two Ames awards. The leadership award was given to Christine D. Tran ’04 and George Lee ’04.

Other speeches included two Harvard Orations—one by Nicholas R. Smith ’04, on the subject of truth, and one by Jennifer N. Hawkins ’04 titled “On Being a Harvard Class.”

Two lighthearted Ivy Orations did their best to warm the audience up for Ali G’s tone.

Leila A. Strachan ’04 spoke of the future, while Colin K. Jost ’04—the former president of the Harvard Lampoon, a semi-secret Sorrento Square social organization which used to occasionally publish a so-called humor magazine—delivered an often-inaccurate disquisition on the history of Class Day, inexplicably deeming himself “arguably more powerful than Larry Summers, physically.”

Jost, whose appearance was heralded by a boom-boxed rendition of Cyndi Lauper’s “Girls Just Wanna Have Fun,” concluded his ramble with a profound, and profoundly funny, observation.

“Anyway, I guess my point is, we’re immortal,” Jost pronounced.