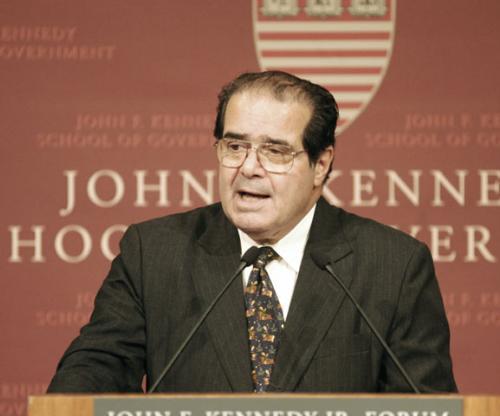 Scalia held the rapt attention of the jam-packed John F. Kennedy Jr. Forum last night, although some students and faculty said they were put off by his conservative judicial philosophy.

In a freewheeling question-and-answer session following the justice’s prepared remarks, an African-American graduate student challenged Scalia to defend the constitutionality of racial profiling.

The Kennedy School student, Larry Harris Jr., said that his Fourth and 14th Amendment rights had been violated when he was pulled over in Cambridge for—as he put it—“driving while black.”

“What the Fourth Amendment prohibits is ‘unnecessary’ search and seizure,” the justice said. “Is it racial profiling prohibited by the Fourth Amendment for the police to go looking for a white man with blue eyes? Do you want to stop little old ladies with tennis shoes?”

The eccentric justice launched into a parody of a police radio dispatch under a scenario in which profiling were prohibited. “The suspect is 5’10, we know what he looks like, but we can’t tell you,” Scalia quipped—drawing laughter from the audience.

Harris was less amused. He said afterwards that “the flippancy with which [Scalia] dealt with the question was insensitive. It shows that on issues like this, he might be a little out of touch.”

Earlier in the evening, Scalia ridiculed the European Court of Human Rights’ 2000 decision striking down British legislation that bars group gay sex on the grounds that the law intruded upon private life.

He asked—rhetorically—how many individuals would have to be involved in a sex act for it to no longer qualify as “private.”

“Presumably it is some number between five and the number of people required to fill the Coliseum,” Scalia joked.

An audience member later rose to ask Scalia “whether you have any gay friends, and—if not—whether you’d like to be my friend.”

“I probably do have some gay friends,” Scalia said. “I’ve never pressed the point.”

But Scalia said his personal views on social issues have no bearing on his courtroom decisions.

“But it is blindingly clear that judges have no greater capacity than the rest of us to decide what is moral.”

He said that jurists should be selected for their “lawyerly skills and judicial temperament.” But he said that the Court’s progressive voices had politicized the judicial process in recent years.

Dunster House resident Zachary D. Liscow ’05 rose during the question-and-answer session to suggest that Scalia’s own vote in the controversial 2000 presidential election case could be viewed as an example of the “judicial activism” Scalia deplores.

“I do not mean by [‘judicial activism’] judges actively doing what they’re supposed to do,” Scalia responded. He said the Florida Supreme Court’s decision to order a recount in Miami-Dade County—a decision Scalia and his colleagues overruled—amounted to a “clear violation of the federal constitution.”

And while conservative justices have been criticized for effectively deciding the 2000 election themselves, Scalia quipped: “Would you rather have the president of the United States decided by the Supreme Court of Florida?”

While Scalia’s prepared speech—which lasted less than half an hour—was narrowly focused, his remarks in the 20-minute question-and-answer question spanned a broad range of topics.

In one of the more bizarre moments of the evening, Scalia mentioned—in passing—that he thought the 17th Amendment was “a bad idea.”

The 17th Amendment provides for the direct election of senators.

The students, faculty and community members who held tickets to last night’s event were the winners of an online lottery in which 2,016 entrants competed for 850 spots.

The fortunate few who scored seats walked out of the forum wowed.

“That was quite possibly the most eloquent speech I have ever heard,” said Hurlbut resident Eduardo E. Santacana ’08.