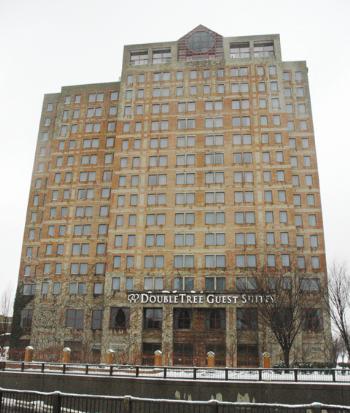 The 15-story Doubletree Guest Suites Hotel in Allston sits across the Charles near the entrance to the Mass. Turnpike.
By Jessica R. Rubin-wills and Joseph M. Tartakoff

In the latest addition to its 200-acre campus across the Charles River, Harvard announced Monday that it had purchased the Doubletree Guest Suites Hotel building in Allston.

Neighbors said they were not surprised by Harvard’s purchase of the 15-story hotel building, which is a landmark on the Charles River near the entrance to the Mass. Turnpike.

University spokesman Joe Wrinn declined to discuss the terms of the sale, but the Boston Globe quoted an unnamed executive placing the price at $75 million. The previous owner, Boston HSR Limited Partnership, put the property up for sale in October 2004.

The real estate firm that handled the transaction did not return repeated calls for comment.

Wrinn did not elaborate on the long-term plans for the property, but in the near future the building will continue to operate as a hotel. Harvard will pay real estate taxes on the property, according to a University statement.

Neighborhood leaders and city politicians protested Harvard’s purchase of 91 acres of Allston land from the Massachusetts Turnpike Authority in June 2003. But Harvard’s latest foray into Boston did not provoke an outcry from residents, who said they had expected the purchase.

Paul Berkeley, the president of the Allston Civic Association, said residents were concerned less with the change in ownership and more with the future use of the property.

“At whatever point Harvard petitions to use properties for other purposes, people’s interest will be heightened,” he said. “Harvard has purchased hundreds of acres in our neighborhood and they have yet to tell us what they will do with one lot. We’re all just waiting to find out what Harvard will do eventually.”

Robert Van Meter, the executive director of the Allston Brighton Community Development Corporation, said that the Doubletree purchase was symbolic of Harvard’s growing clout in Allston.

“The neighborhood has a lot to consider about what all this means in the long-term,” he said. “That hotel is quite isolated from the rest of the community. It’s more symbolic of Harvard’s potential impact.”

Kevin McCluskey ’76, Harvard’s director of community relations for Boston, said the new property would become part of a broader planning process with the neighborhood.

A task force made up of residents, community leaders and Harvard representatives has met since 2001 to develop a vision for Harvard’s future campus, releasing a report last October.

“We will continue to work constructively with our neighbors and with the city and local elected officials,” McCluskey said.

Last June, Harvard announced it had hired the planning and design firm Cooper, Robertson to create a master plan for the Allston campus, working with a team that will include architect Frank O. Gehry and incorporating the goals outlined in the community task force report. The campus will be centered around science, professional schools and undergraduate housing.

Christian Coffin, the general manager at the Doubletree Hotel, said Harvard’s purchase would not affect the day-to-day operation of the hotel, which will continue to be managed by Hilton Hotels. He said Sculler’s Jazz Club, a popular attraction located in the hotel, will remain open.

“It’s a very behind-the-scenes situation,” Coffin said. “From an employee perspective, there’s absolutely no change at all.”

He added that the hotel was optimistic about the sale, praising Harvard’s record as a landlord.

“Harvard is already one of our biggest clients, given our location,” Coffin said. “This should further cement that relationship.”

Harvard owns two other hotels—The Inn at Harvard and the Harvard Square Hotel.

An earlier version of the headline of this article and statements in the article stated that the DoubleTree Suites hotel is Harvard-owned. To clarify, the company is housed in a Harvard-owned building.