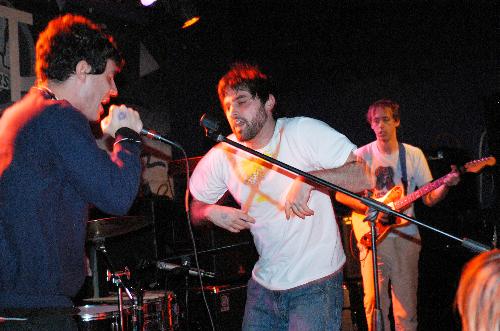 So, youngster, you want to be hip. Whenever someone mentions their new favorite band, you want to sigh and say that they were awesome both times you saw them onstage. And you want to do this despite your sub-21 age.

Unfortunately, Boston’s small venues aren’t underage-friendly and your choices here are limited. Most Harvard students limit themselves to the Central Square standby everyone knows about, that four-stage indie palace curiously named after a geographic region.

Next time, though, turn the corner past the Middle East and visit its gritty next-door cousin: t.t. the Bear’s Place. t.t.’s has as much street cred as any place in Boston—according to legend, Nirvana played there for a crowd of 14—and you’re less likely to run into that obnoxious future i-banker from your Justice section. At t.t.’s you can party with the pierced and enjoy some of the best acts on the small-club circuit.

The club books a fairly eclectic array of bands, but its rep lets it be choosy in who it books. Last month, for instance, they hosted a sold-out show of current indie darlings Clap Your Hands Say Yeah!.

Still, be prepared to sit out a little turbulence. One night last year, a friend and I arrived while some maniac opening band was onstage. Their sound was the aural equivalent of a bad Pollock painting: barely controlled arrhythmic screeching that would have made Ornette Coleman wince. My friend and I were glum; had we wasted our money on this?

I can still recommend the club’s booking, though, because the headliners we’d come to see—a quirky electro-rock outfit called Out Hud—gave us well more than $10 worth of sweat-drenched dancing.

t.t.’s ticket prices are modest even for their most anticipated shows. They usually go for $10, and rarely rise above $15.

The club itself is as cramped, dark, and sweaty as it should be. The bar (open to the happily wristbanded) divides the perpetually crowded performance room from a more loosely packed lounge with tables and chairs. The place is always loud, and the noise of your jawbones vibrating against each other will probably thwart attempts at conversation.

It makes me sad whenever I mention t.t.’s to a fellow Harvardian and get a blank stare in response. If you care about rock, even a little bit, you should scan the t.t.’s website calendar for an act you’ve heard of. Even if you haven’t heard of any of them, Google them till you find one that sounds interesting, toss back some brews with a friend, and take the T one stop to Central.

Trust me. You’ll have a good time, and might even get to dance with some of the raven-haired resident hotties who nest there night after night.

—Staff writer Michael A. Mohammed can be reached at mohammed@fas.harvard.edu.