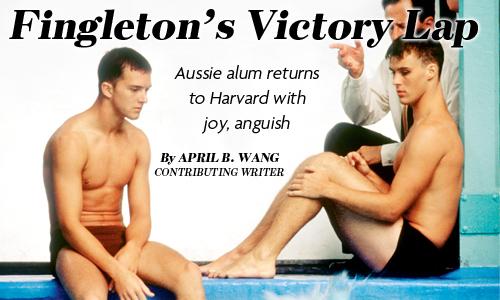 By April B. Wang, Contributing Writer

The first thing I notice about Anthony J. Fingleton ’67 when we’re introducing ourselves in the pre-interview rites—aside from his loud, red floral tie and Aussie accent—is his grin.

It’s a broad and genuine one, the kind of grin that shows every single tooth. As he speaks, his face flashes with expression, his hands constantly churn the air in gesticulation, and there’s no chance for me to get in a word edgewise, or even really ask any questions. Take into account his ruddy cheeks, and the 65-year-old Australian comes across as an overgrown little boy.

Which is more than a little surprising, given Fingleton’s boyhood. The grim realities of his youth—riddled with alcoholism and poverty—belie the enormous list of accomplishments he has acquired in adulthood: author, screenwriter, film producer, former champion swimmer, and graduate of our own dear alma mater. Consider the trajectory of Fingleton’s life and meaning is restored to the cliché title of his autobiography and its 2003 film adaptation, “Swimming Upstream.”

Fingleton’s return to Cambridge last Thursday was his first since his college graduation. The occasion? A special screening of “Swimming Upstream,” followed by a Q&A session, all to raise money for the bankruptcy-threatened Brattle Street Theatre.

“It’s a hard story about a family that’s dysfunctional,” Fingleton says of the film, in an interview with The Crimson before the Brattle event.

But then he hesitates and contemplates that last word, “dysfunctional.”

He waves his hands, correcting himself, “But they’re not really. It’s a new word, ‘dysfunctional,’ and I suppose we were, but we were very close [as a family],” says Fingleton.

Fingleton grew up in a small neighborhood of Brisbane where most of the men made their weekly earnings working on the wharves and spent those earnings in the pubs. His film illustrates a childhood saturated with pain: his father and brother were alcoholics, his mother attempted suicide, his family struggled with poverty, he competed with his brother to the point of estrangement, and his father abused all of them, psychologically and physically.

“You don’t think that other people have the same problems…but what has happened is that every time I’ve asked that question, for a show of hands of whose lives have been affected by alcoholism…it will be at least half,” Fingleton says, nodding as if still shocked by the responses.

Fingleton escaped from his domestic problems in the cool waters of the neighborhood pool. Near his home was an indoor swimming pool that cost only a penny for admission, and in the hot Australian summers, he and his brothers and sister often found themselves there.

After Harold came to watch Fingleton and his siblings at the pool one day, it suddenly transformed from a safe refuge to a place where his father could exercise enormous power over the boys. Seeing success for his sons through swimming, Harold drilled the two boys incessantly, waking them up for practice before dawn, and stoking a fire of competition between his two sons.

Despite the unbelievable stress, Fingleton saw swimming as a path to a happier life. He says he thought that success at swimming could perhaps win his father’s affection and provide a path away from the wharves.

“Swimming was something you had to do,” Fingleton recalls. “It was my ticket out.”

He was offered a spot on the Australian Olympic team, but chose instead to accept a full scholarship to attend Harvard. The scene in which the young Tony makes that fateful decision on film is fraught with dramatic tension, but the real-life Fingleton only recalls the choice with excitement.

“I came here to [Harvard], which was crazy, because I grew up in a small, lazy town and the idea of Harvard wasn’t even on the radar screen.” Then he laughs, remembering the poor, slow Brisbane of his youth and jokes, “If there was such a thing as a radar screen!”

FLOWING INTO THE CHARLES

By the time he was set to leave for Cambridge, Fingleton’s mother had kicked Harold out. The film shows a somber farewell between father and son, one of the last interactions they ever had before Harold’s death. Later, an ecstatic young Tony tries to convince his reluctant mother that Harvard is the right place for him. As it turns out, he was correct.

“[Harvard] was just so great, and I just embraced it so, and the Americans embraced me. People really took us [foreign students] in. People asked us home to Thanksgivings,” Fingleton says, shaking his head as if he is still surprised at such a show of open hospitality.

Fingleton adapted to Harvard like most freshmen. He was terrified of the Radcliffe girls—“they scared the bejeezes out of me,” he chuckles—and he gagged over Expos. Indeed, he still shudders at the memory of his preceptor.

“The first thing he said was to write a paper about art,” Fingleton recalls. “Two weeks I had been at Harvard, and he came into the class with all these papers, and he said, ‘You think you’re all so great,’ and then he started throwing papers at people.” Fingleton laughs, then mimics the professor, bellowing, “‘This is the worst paper I’ve ever read, Smith!’” Finally, it was Fingleton’s turn. “[The professor] was just saying the most horrible things to everybody about how pathetic they were. Then I got a ‘B,’ and I could handle that.”

Despite the humor in Fingleton’s tone, it’s clear that there was much more at stake for him in those first few grades than there is for the average Harvardian. “I thought it would be so embarrassing to step off the boat back in Australia and say it didn’t work. How could I face all my friends with my tail between my legs?”

Oddly enough, swimming took a back seat in Fingleton’s Harvard days. Due to a technicality involving his transfer-student status, Fingleton couldn’t swim during his freshman year. But even when he had the opportunity to return, Fingleton’s attitude had undergone a dramatic shift.

“After taking a year off, I no longer found [swimming] to be the challenge it used to be for me,” Tony says. “I had been swimming for so many years that it had lost its appeal. And then there were so many other fascinating and fun things at Harvard that I wanted to be a part of and so I hung up the old bathing suit, as it were.”

Fingleton soon found other outfits to wear—including makeup, wigs, and some flamboyant female attire as a member of the Hasty Pudding Theatricals, eventually becoming the society’s Vice President.

“I did three Hasty Pudding shows, and it was more fun than anything,” Fingleton says, grinning. “I had the lead female role once…I played the goddess Diana. I made my entrance on a cloud with grapes on my ears and a red wig. It was very silly and more fun than I could imagine.”

In fact, a 1967 Crimson review of that very production, “A Hit and A Myth” describes Fingleton’s performance as a “magnificent visual characterization of Diana.”

“[He] looks precisely like one of the more grotesque 19th century caricatures of Britannia,” the article declares.

When not wearing frilly skirts, Fingleton was busy meeting people, including his future business partner, with whom he would set up a small production company. Oh—and there was a girl, too.

“Her brother was in my class. We became friends, and then I romanced her at Charlie’s Kitchen,” Fingleton says. He asks me if I know of the place. Being a freshman, I say no. “It used to be down near the river, a dumpy little place,” he waxes, nostalgically. “I had absolutely no money, [but] I wanted to take her out on dates.”

Fingleton and his lady-friend married the day after graduation, and promptly moved to New York, where they have been living ever since. A History concentrator as an undergraduate, Fingleton had hoped to go to business school. After getting married, however, he changed his plans and decided to get a real job.

The realm of entertainment was a natural choice. “I had been in the [Hasty Pudding] shows, and that gave me a kind of interest in that world as something I really, really enjoyed,” Fingleton says.

First, he landed a job working for ABC. Later, Fingleton went to work as an agent, and then he helped set up a production company that bought and sold scripts. He started to rewrite some of the scripts that his company was buying, and one day he simply thought, “I can do this,” and started to write his own scripts.

“So I sort of backed my way into being a screenwriter. I didn’t grow up saying, ‘I’m going to write a movie,’” Fingleton recalls.

Fingleton went on to write and produce the comedy “Drop Dead Fred.” Later, he met up with his younger sister and co-authored the book “Swimming Upstream.” In 2003, he saw it made into the movie.

“Swimming Upstream” is proof that Fingleton hasn’t lost any nerve since his champion tournament days: overseeing the production process, Fingleton had to plumb the depths of his childhood pain.

“You can’t imagine,” he says, shaking his head. “You cannot imagine how peculiar it is, because everyone is running around saying ‘Tony’ and ‘Harold’…and I was on the set every day. And watching these scenes that I recalled so vividly!” He shakes his head again, adding, “It’s ‘Twilight Zone.’”

There were a few especially grueling stages of the process. Fingleton recalls a particular scene in which his father (played by Geoffrey Rush), begins to drink again, after a period of sobriety.

“I remember the night it happened…and they enacted it as I wrote it, and it gave me the chills,” Fingleton says. “I remember at the time, even though I was only about 13, looking at my father terribly, hopelessly drunk, and I thought, ‘This is the saddest human being that I’ve ever seen.’”

Fingleton pauses for a moment, trying to process the experience into words. “When I saw this enacted, I got the same overwhelming feeling.”

The film was released to enormous critical acclaim in Australia, garnering five Australian Film Institute Award nominations, including one for Best Adapted Screenplay.

So what’s next for Tony Fingleton? He’s been pitching another film, a work of fiction called “Ten Years Ago,” and he says that it’s finally about to go before the cameras.

At the end of the interview that Tony pauses and the grin is back. He laughs at himself for what has been, essentially, a lengthy monologue, and asks me if I have any other questions. He has answered everything I might want to know.

Before we part ways, Fingleton spreads his hands, as if to encompass the lounge of the Inn at Harvard, Harvard Square, and the entire campus. “And here I am today as a result of having gone to this place,” he says.

Tony Fingleton is a paradox. A boy with an unimaginably painful childhood who grew into a man overwhelmingly boyish in his optimism and energy. A victim of enormous pressures as a youth who channeled his angst into a remarkable, inspirational film. A recruited athlete who found his calling among the ranks of the cross-dressing comic actors of the Pudding. Tony Fingleton is living, breathing, grinning proof that it can happen here.