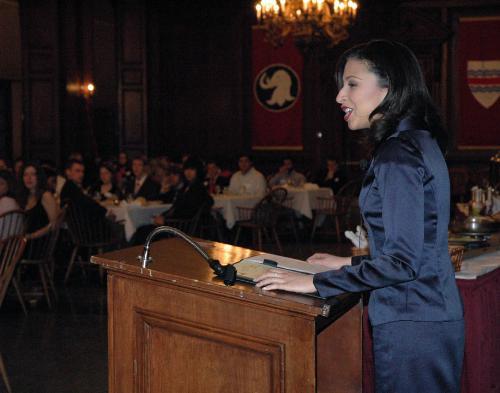 After serving as Miss America 2003 and touring the country in support of President Bush, Erika N. Harold spoke about race and the Republican party with about 120 students at Friday night’s 3rd annual Lincoln Day Dinner, sponsored by the Harvard Republican Club (HRC).

Making the trek to the Eliot House dining hall from the Harvard Law school (HLS), where she is a first-year, Harold spoke about minority education and praised the Bush campaign for its minority outreach strategies.

“I want the party to reflect the complexion of the country,” said Harold, to explain why she became involved with the Republican party.

Harold’s heritage is complex—her mother is African American and Native American while her father is Greek, German, and English.

A native of Illinois, Harold served as an Illinois delegate at this summer’s Republican National Convention (RNC) after touring as Miss America—making her an appropriate choice to speak, said HRC Communications Director, Paloma A. Zepeda ’06.

In her speech, Harold frequently referred to Abraham Lincoln, the dinner’s namesake, comparing his efforts to reach out to minority leaders to the attempts of the most recent RNC Chairman, Ed Gillespie.

Reflecting on November’s election, she explained, “This election was about saying [to minority groups], ‘We haven’t done everything right as a party, but can you give us a chance?’”

She also referred to the increasing percentage of African Americans voting for Republicans as evidence of the success of the party’s minority outreach efforts.

According to exit polls, while approximately eight percent of the African-American vote went to Bush in 2000, this number was almost 12 percent in 2004. Harold predicted further gains for the future.

In a particularly poignant moment, Harold recounted the time she spent visiting with members of the military.

“Your vision of opportunity is shaped by the role models you see. Aspirations change when you see people like Harold,” said Christina A. McCalla ’06.

After her speech, Harold addressed student questions on topics including affirmative action and the racial makeup of the military.

While her articulateness and poise impressed many attendees, others criticized her general answers.

“I was still unclear after the speech what she thinks about race and the Republican party,” said Vivek G. Ramaswamy ’07.

Prior to speaking, Harold sat down to dinner alongside attendees in Eliot at tables adorned with American flags and pennies featuring the bust of the celebrated president.

For anyone who doubted the presence of Republicans on Harvard’s campus, the dinner, attended by more than 100 Republican students, proved conservatism is alive and kicking.

The GOPers said they enjoyed meeting and greeting students who shared their political ideals.

“You definitely feel like a minority as someone who’s willing to express their conservative viewpoints,” said Helen V. Renton ’08. “It’s fun to find people you’ve seen before but didn’t know were Republican.”

The Lincoln Day Dinner is an annual event hosted nationwide by Republicans to recognize advances within their party.