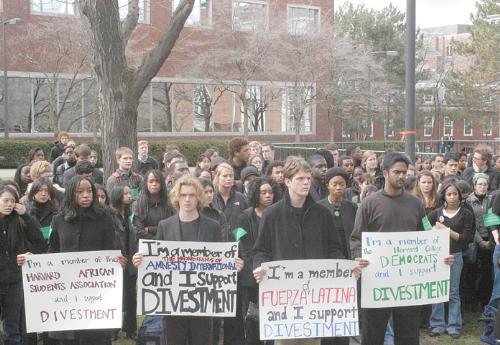 Chimnomso K. S. Kalu ’07, Alexander D. Rafael ’07, Felipe A. Tewes ’06, and Vikram Viswanathan ’06, along with 150 other students walked to Loeb House yesterday in a silent protest organized by the United Front for Divestment.
By Daniel J. Hemel, Crimson Staff Writer

Harvard announced yesterday that it will sell its stake in PetroChina, bowing to pressure from students and faculty members who had denounced the Beijing-based oil company for its ties to the Sudanese government.

The Corporation Committee on Shareholder Responsibility (CCSR) said in a statement yesterday that the decision “reflects deep concerns about the grievous crisis that persists in the Darfur region of Sudan,” where government-backed militiamen have killed tens of thousands of black Muslim villagers.

The three-member CCSR, the only group with the power to veto Harvard’s investments on ethical grounds, is a sub-committee of the Harvard Corporation, the University’s highest governing board.

PetroChina is a spin-off of the China National Petroleum Company, which has invested over $1 billion in a joint venture with Sudan to increase that country’s oil exports. Harvard’s decision makes the University the first institutional investor to cut ties with PetroChina in response to the Darfur crisis, activists said.

Student leaders who had pushed for divestment praised yesterday’s decision, but said that their campaign would continue until Harvard discloses the full extent of its investments in companies that conduct business with the Sudanese regime.

While the present size of Harvard’s holdings in PetroChina is not known, filings with the Securities and Exchange Commission (SEC) reveal that as of December 31, 2004, the University held 67,200 shares of the stock, which would be worth $4.4 million at the close of business yesterday.

But the SEC does not require Harvard to report its holdings on foreign stock exchanges. University President Lawrence H. Summers said last month that Harvard had held shares in PetroChina on the Hong Kong Stock Exchange.

The CCSR has instructed the Harvard Management Company, which oversees the University’s $22.6 billion endowment, to sell its PetroChina stake, according to University spokesman John Longbrake. Longbrake could not provide a timetable for when the sales would occur.

Yesterday’s CCSR statement did not distinguish between the New York and Hong Kong holdings. But a spokeswoman for Summers said last month that any decision on divestment would affect all PetroChina shares “regardless of the exchange on which they trade.”

Still, activists called on the Corporation to clarify that yesterday’s announcement would apply to foreign holdings.

“The student body would like to have official confirmation,” said Lawrence E. Adjah ’06, president of the Black Students Association, which has helped coordinate divestment efforts.

NOT ALL DEMANDS MET

The petition called on the University to issue a blanket statement pledging not to invest in Sudan-related companies “for as long as Sudan is in violation of international norms of human rights.”

Bhatnagar said yesterday’s CCSR statement, which focused narrowly on PetroChina, did not meet the petition’s demand.

Matthew W. Mahan ’05, an executive board member of Senior Gift Plus, said the group’s leaders would meet today to discuss the future of their movement, which had encouraged members of the Class of 2005 to withhold their graduation gift unless the University divested from PetroChina.

But Mahan said he did not expect the group to disband until the Corporation fully disclosed all of its foreign holdings in Sudan-related companies.

“If there’s no disclosure, if there’s no further action, it could be chalked up to a PR move,” Mahan said.

Senior Gift executive committee spokeswoman Jessica E. Vascellaro ’05 said she was confident that the movement to withhold Senior Gift donations would lose steam after the CCSR’s decision to divest.

“Despite the fact that Senior Gift Plus will almost certainly continue to exist, the issue that most seniors who were associated with Senior Gift Plus were concerned about has been resolved,” said Vascellaro, who is also a Crimson editor.

Professor of Psychology Patrick Cavanagh, who called on Harvard to sell its PetroChina shares more than a week before the student divestment movement emerged, said that student activists deserve the credit for swaying the CCSR.

“The University found something that it probably doesn’t have much of a stake in or that it’s ready to sell anyway for its own reasons and has ignored many, many other cases in the past which are on the face of it probably worse,” Womack said.

“This is going to make PetroChina an exceedingly unattractive investment for institutional shareholders,” Reeves said.

Samantha Power, a lecturer in public policy at the Kennedy School of Government, said that divestment is an “unproven tool” in the effort to deter genocidal regimes, but that Harvard’s move could “unleash a contagion effect.”

“It also sends an essential message back to all the activists who have given so many hours and so much heart to this initiative that something tangible can be achieved through advocacy,” Power added.

“For all of the talk of Darfur, this is the first week that anything tangible has been done that would cause the Sudanese government to think twice about their genocidal campaign,” Power said.