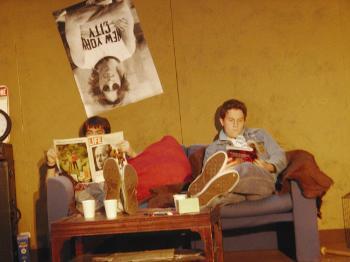 The actors in this week’s production of “This Is Our Youth” shuddered as they watched themselves in a video-taped dress rehearsal. Their shyness was underserved: even in a casual run-through, they succeeded admirably.

Not to be confused with the presentation of the Kenneth Lonergan play that ran last weekend at Adams House, this production of “This Is Our Youth” will be performed at Harvard Hillel, today, tomorrow, and Wednesday.

“This Is Our Youth” tells the coming-of-age story of three New York teenagers in the early eighties, and for Kohanski, the awkwardness of the characters is inextricably intertwined with the time period in which they lived. “The story of angst-ridden teens on the brink of adulthood reflects the awkwardness of the culture between the seventies and the overindulgence of the eighties,” she said.

Only three actors make up the cast: Mike G. Jordan ’08 plays Dennis, a manipulative drug-dealer; Daniel R. Peccia ‘08-’09 is Warren, Dennis’s doormat friend who comes into his own as the play progresses; and Andrea M. Spillman ’07, who dresses in pink spandex to play Jessica, the young woman Warren falls for. Although the three are on stage all together only once, their tangible chemistry supports the action at all times.

In fact, even at the tensest moments––and there is an abundance of these, since scenes of defensive and angry arguing dominate the play––the actors’ fun rapport remains discernable. All agreed with Spillman’s diagnosis: “the whole dynamic’s just been really good,” she said.

A highlight of this production is its soundtrack: the crew assembled a mix of songs that correspond to the atmosphere of the play, including one song composed especially for the production by the Harvard alumni band, My First Car.

Upon first reading the play, Kohanski says she recognized herself, and predicts that her precise reaction typifies and reveals the depth of the show’s appeal to undergraduates. “I read it,” she recalled. “And I was like, ‘oh dude, that was me!”

Indeed, it does not seem far-fetched to predict that any viewer, of any generation, will find bits of “This Is Our Youth” that hit home––with poignancy and with humor.