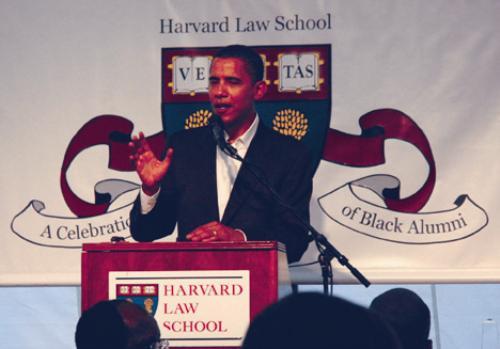 A humorous Sen. Barack H. Obama (D-IL) speaks at “A Celebration of Black Alumni” at Harvard Law School on Saturday about the political climate and the hurricane aftermath.
By Javier C. Hernandez, Crimson Staff Writer

Obama’s remarks at HLS’s “Celebration of Black Alumni” on Saturday ranged from the candid to the canned, a medley of frank political assessments and familiar one-liners.

Obama, a 1991 graduate of HLS, called for increased accountability from the White House, saying “it is absolutely imperative that we call [President Bush] on his bluff.”

“In the immediate aftermath of the hurricane, I think it’s important that we don’t just assume that George Bush is lying when he says he’s finally been awakened to the fact that poverty and racism are in our midst,” he said. “It’s tempting to do so, especially when he decides to put Karl Rove in charge of reconstruction.”

Speaking of Bush’s alliance with U.K. Prime Minister Tony Blair in a question-and-answer session, Obama drew roaring laughs when he compared the president to a “crazy uncle.”

“I can only imagine the conversations [Blair] is having with the rest of the European Union every day, ‘What’s up with you and Bush?’” Obama said. “It’s like having sort of the crazy uncle that you don’t really want to talk about.”

But the crux of Obama’s speech dealt with the hurricane, which hushed the crowd of over 800 African-American alumni gathered in front of Langdell Library.

Obama called the federal government’s response “achingly slow.” And responding to allegations of racism in the government’s reaction, Obama said he did not blame federal officials for any “active malice,” but for “passive indifference”—the assumption that people of all races and income levels had the necessary resources to evacuate before the hurricane hit.

“And the notion that folks couldn’t do that simply did not register in the minds of those in charge,” Obama said.

Later in his speech, Obama speculated that “corruption and cronyism” were involved in the appointment of former FEMA director Michael D. Brown. But while he told the crowd of prominent lawyers, academics, and business leaders that he shared Democrats’ anger towards the government, he said there is also a danger of “smugness and self-satisfaction.”

Obama added that the nation’s most significant deficit is its lack of empathy. “We’ve been lulled into a certain apathy,” he said.

In the question-and-answer session, Obama discussed his nine months in office as the only African-American in the Senate and his experience with colleagues on the other side of the aisle.

“They are taking their marching orders and their talking points from the White House,” he said. “There are Republicans who have better impulses than are on display right now. We have to embolden them by knocking a couple of them out.”

Obama also offered a more frank assessment of some of his colleagues.

“There are some folks there who, you’re wondering, ‘how’d you get here?’” he said.

He briefly touched on issues of foreign policy, saying that the United States involvement in Africa is “not charity, it’s self-interest” and that he expects to know by next spring whether the U.S. can achieve necessary goals to ensure a stable Iraq.

“If it cannot, then we’re going to have some very hard decisions to make,” he said.

Obama, the first black president of the Harvard Law Review, received a Harvard Law School Association award at the luncheon.

Prior to his address, HLS Dean Elena Kagan spoke of the qualities she thought made Obama worthy of the award.

“And it’s that passion for service, that commitment, to be of use, to give back, to make a real difference in the world...that’s what makes Barack Obama for me and for so many others a hero,” said Kagan, who was a colleague of Obama’s at the University of Chicago Law School.

Longtime Obama friend Peter C.B. Bynoe ’72 also warmed the crowd, delivering a roast of the senator in the style of a “top ten” list. Bynoe listed the fact that Obama “married well,” “stayed married,” and revealed that he “did more than inhale” as top reasons the 44-year-old politician ascended to the U.S. Senate.

In his remarks, Obama jokingly chided Bynoe for “putting all my business out there” and for “not understanding the gravity of the occasion.”

The three-day celebration was the second in HLS’s history, and included panels, discussions, and the presentation of the HLS Medal of Freedom to author Randall Robinson.