Zaidi: A ‘Promise’ Based on Ideals, Change 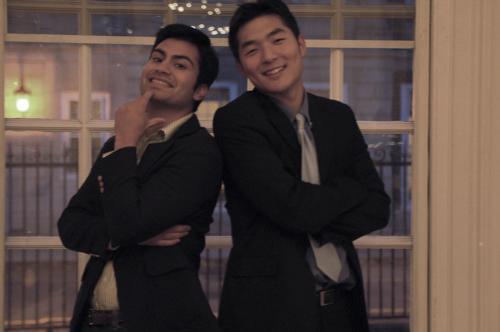 Ali A. Zaidi ’08 and Edward Y. Lee ’08 say their slogan “Harvard’s promise” reflects their attempt to change the culture and identity of the College.

And in a campaign crowded with candidates, the duo is holding fast to its idealistic proposals in hopes of capturing the Undergraduate Council’s top two seats.

“I think idealism is a point of view, it is not a mode of operations,” Zaidi says, who also stresses the importance of a campus-wide community.

The Zaidi-Lee ticket is not short on inspiring slogans, with a Web site that pledges to build “inclusive communities,” “engaging relationships,” and “healthy lives.”

The two have combined forces during the campaign to convey their vision to students.

“[Zaidi’s] more of an ideological visionary and I’m more of a transactional leader,” says Lee. “I like to sit down with students and student groups. I want to be the one to communicate the ideology on an individual level to students.”

Zaidi says that he brings a vision for long-term change to the UC with a campaign designed to change the nature of the council.

“We want to make Harvard’s Promise into a tradition. For us it’s a shift in mind set,” Zaidi says, adding that they hope to change the UC from an organization “locked into a one-year cycle” to one with a sense of long-term vision.

Lee also says that the UC has “no sense of institutional memory.”

According to Zaidi, the students must think beyond a one year term to be on the same page as administrators.

“If we don’t articulate something that tells the administrators where we want to be five years down the road... we’re just going to be a weak lobbying group that applies minimal pressure and changes its goals from year to year,” Zaidi says.

While UC veterans Zaidi and Lee have council experience under their belts, they say their families were their largest inspiration.

Zaidi has served on the UC since his sophomore year and is a member of the council’s Student Advisory Committee. Lee has spent almost two years on the council, and is a vice chair of the Finance Committee.

Zaidi credits his family for providing him with a unique perspective, which would serve him well as UC president.

As one of the only Muslim families in his western Pennsylvania neighborhood, Zaidi says his parents—who emigrated from Pakistan when he was six—used their differences as a way to approach the community and eventually integrate into it.

“Our family defined itself in contrast to everyone else,” he says. “We would send cards during the Christmas season to our neighbors and our neighbors started sending my family cards to us during Eid season, a Muslim holiday.”

Lee also cites his family as an inspiration, crediting his parents with giving him the confidence to run.

“My parents are an inspiration because they did not know English but somehow got through graduate school and wrote their PhD theses,” he says.

“I look at them now and they still can’t really speak English. That they could accomplish this with no support system...is a big inspiration.”