The boisterous, busty, and bawdy HPT 158 is the "show of the year" 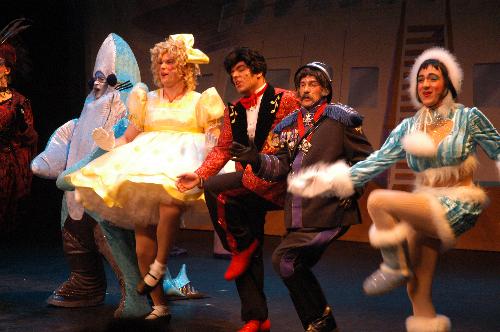 The cast of Hasty Pudding Theatricals, the nation’s oldest theater company, shimmies and shakes in spangles and stillettos in its 158th production “Some Like it Yacht,” a musical mystery on the high seas.
By April B. Wang, Crimson Staff Writer

“The sun is bright, and the weather’s breezy,” sings the cast with their high-heeled legs kicking and glittery bosoms swinging. “If you’re feeling sick, lean over the rail, and throw yourself off, if you went to Yale!”

The all-male group is in good spirits.

It is the maiden voyage of the Hasty Pudding Theatricals’ (HPT) 158th production, “Some Like it Yacht.” Written by Josh M. Brener ’07 and Samuel Gale Rosen ’06, both seasoned veterans of HPT, and with music composed by Ben E. Green ’06, the new show maintains its reputation for high caliber wit, music, and entertainment as the oldest acting troupe in drag. Produced by Mary Kate A. Burke ’06 and Ashley A. Zalta ’07 and directed by professional Tony Parise, “Some Like it Yacht” will run until March 19. The show will then go on to New York and Bermuda in late March.

On the lit stage of the Zero Arrow Street Theatre, a ship full of unique passengers sets sail. Astoundingly voluptuous “women” decked out in fur, pompoms, spangles, pleather, and sequins from head to toe—or rather from the lower half of their colossal breasts to the tops of their stockinged thighs—strut the decks. A Hitler look-alike (Josh C. Phillips ’07) dutifully trots after a terrifyingly overgrown Shirley Temple clone. A sleazy-looking captain (Alan D. Zackheim ’06) herds the crowd, ridiculously wielding his violin case as a rifle.

There is mischief afoot onboard the S.S. Some Like It Yacht, and detective Cliff Hanger (David W. Ingber ’07) goes undercover to find out who is at the bottom of all the trouble. Unfortunately, all the passengers are suspiciously odd: conniving child-star, little Miss Dee Meanor (John P. Blickstead ’06), has grown outgrown her years of stardom and will do anything to regain the limelight; her bowlegged, swastika-loving director, Jurgen Aregretzat (Phillips), has one passion in life—to reestablish Hitler’s regime; a mute silent-film actress (Sean R. Fredricks ‘07), pops up whenever secrets are being shared; Barry Dreasure (Michael B. Hoagland ’07) is a pirate bent on killing the great white shark (Toby W. Burns ’06) who wronged him.

Add an aviatress who can not fly (Ben K. Kawaller ’07), a playboy musician (Justin V. Rodriguez ’07), a sexy marine biologist (Peter A. Dodd ’06), and sultry genie Juana Rubme (David J. Andersson ’09), to the pot, and it is pretty hard to single out the culprit.

The entire HPT crew—the actors, the band, and those who worked behind the scenes—live up to the amazing script and musical score. While it seems that both today’s songs and singers are becoming increasingly generic—even on Broadway—HPT commendably delivers refreshing performances of 14 witty new songs, including “Women and Chillin’ First” in which Rodriguez attempts to seduce all women in sight with a suave nonchalance that is part Fred Astaire and part Elvis. In “There’s the Rub,” a dazzling Andersson manages to be touching and moving, even while dressed in more makeup, skimp and sparkle than Cleopatra.

Phillips’ role of Jurgen Aregretzat is a little reminiscent of the Nazi fanatic Franz from Mel Brooks’ “The Producers,” whether it is because of the similarity in their military costumes, their heavy accents, or their defining obsessions with the Fuhrer. But in “Some Like it Yacht,” Phillips not only proves that he can hold his own with the best of Broadway as far as acting goes, but it is fair to say that his hilarious performance of “The Reich Track” edges “Der Guten Tag Hop-Clop” from “The Producers” into the shadows.

Another especially memorable performance is that of Fredricks’ Cat Gotchatongue. Bedecked in glittering, flowing black and scarlet robes and with a face plastered with white makeup, Fredricks’ silent acting is vivid and ridiculously histrionic, perfectly fitting the dramatic silent film music that accompanies his movements.

Of particular note is the dancing, choreographed by professional Karen Pisani and assistant Lauren L. Jackson ’07. It is an incredible feat for all the performers to keep in synchronized step, especially when scattered sporadically all over the stage.

The dancing reaches its apex in “Clap On, Clap Off,” a seductive dance intermixed with singing, in which Andersson and Rodriguez create sparks. Andersson’s belly dancing moves and the pair’s close, sensual and rhythmic dancing calls to mind a Latin ballroom routine.

The natural ease and comfort that the cast demonstrates—kicking, twirling, and shimmying in stilettos—is a true testament to their hard work and practice, and the moves are no basic steps from a beginner’s dance class. The dances involved swing moves, complicated lifts, line dancing that put the Rockettes to shame, and gyrations worthy of John Travolta in “Grease.” In the finishing number, the actors even go into a parody of “Swan Lake”—en pointe and all.

“Some Like it Yacht” is the show of the year. Whether you go for the music, for the dancing, for the dialogue, or for the acting, HPT 158 is guaranteed to send your artistic senses sailing.

—Staff writer April B. Wang can be reached at abwang@fas.harvard.edu.