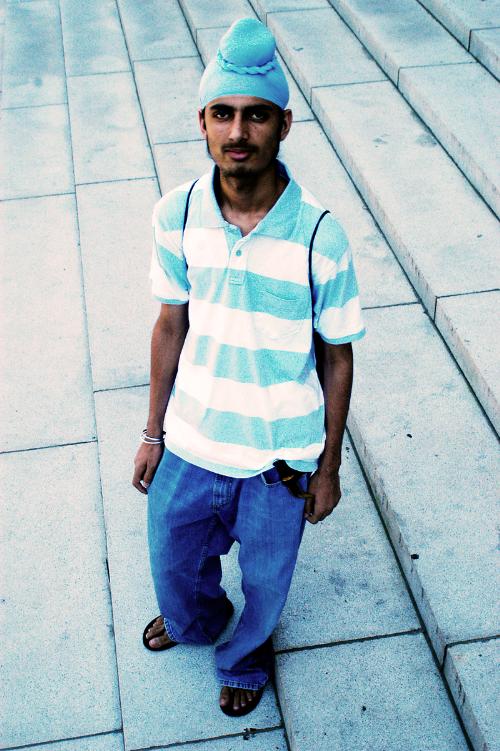 Navdeep Singh Johan had his kirpan—a sword that he carries for religious reasons—taken away and then returned by Harvard administrators.

A Sikh student at the Harvard Summer School who carries a kirpan—a sword worn sheathed and under clothing by baptized Sikhs as an article of faith—had his kirpan taken away from him in mid-July by Harvard administrators, though pressure from a Sikh advocacy group caused Harvard to return the kirpan soon afterwards.

Administrators first contacted the student, Navdeep Singh Johal, on July 6 and asked him to provide information about his kirpan. Johal contacted the Sikh Coalition, a group started by former Harvard Divinity School student Harpreet Singh in the wake of the September 11, 2001 terrorist attacks in order to educate Americans about the religion and stem the rising tide of hate crimes against Sikhs.

Amardeep Singh Bhalla, the Coalition’s legal director, provided Harvard with a 28 page document outlining the religious meaning of the kirpan and legal precedents permitting Sikhs to carry the kirpan, including cases in Detroit, New York, Dayton, Ohio and Los Angeles.

On July 12, Johal was asked to meet with Dean of the Summer School Robert Lue and with William Holinger, the director of the Summer School’s Secondary School Program. They asked Johal not to wear his kirpan while they researched and considered “safety issues,” Johal said.

“I was really upset,” Johal said. “I always wear [the kirpan] all the time and I never take it off. I’ve been wearing it since I was baptized in sixth grade.”

The kirpan is worn by Sikhs as a symbolic commitment to protect the weak and ensure peace and security.

Johal also said that he was asked if he would continue to attend Harvard Summer School if he was not allowed to wear his kirpan.

“I said, ‘I don’t know,’” Johal said. “I felt...so bad...Harvard should know all this information about other religions.”

Less than four hours later, Johal’s kirpan was returned to him and his parents were contacted by Summer School Dean of Students Christopher S. Queen “letting them know [administrators] were sorry about what happened,” Singh Bhalla said.

A spokeswoman for the Division of Continuing Education, Linda A. Cross, confirmed that after administrators conferred with a University attorney, the Office of the General Counsel authorized the Summer School to allow Johal to carry his kirpan.

“[Queen] said the university officials needed to understand why he carried it and this is a matter of education and the like,” Singh Bhalla said. “Everything happened very rapid-fire, very quickly and I think it really helped that Harvard is so sensitive and especially the Pluralism Project. Somebody said something and things all of a sudden happened much faster than Navdeep was originally told.”

According to Eck and Cross, Harvard has not encountered this issue before.

Singh, who is currently a graduate student at the Graduate School of Arts and Sciences, said that he wears a kirpan, but “most people don’t know.” He guessed that “maybe two or three Sikhs including myself” currently carry kirpans at Harvard.

Singh said that while he was not contacted directly by Johal, “I’ve been personally involved in dealing with such matters with the police because Sikhs are routinely arrested in public places for carrying the kirpan.”

He said that he is pushing for Harvard to adopt a formal policy that will recognize Sikh’s right to carry the kirpan.

“It would be wonderful if we set a good precedent here,” Singh said. “If the administration changed its policy to recognize the kirpan it will give a good signal to other universities across the nation. Harvard can show real leadership here.”

Queen, a lecturer on the study of religion, wrote in an e-mail yesterday that he has suggested that the Pluralism Project make recommendations to the University about adopting a formal policy on the issue.

While Johal said he was satisfied with the return of his kirpan, “I kind of felt bad that they didn’t know about it,” Johal said. “I’ve been to some other summer schools also; last summer I was at Princeton...I didn’t have other problems. It was kind of funny that Harvard didn’t know.”

Singh Bhalla said that while the right to carry a kirpan continues to be challenged by some with safety concerns, “I think in the fifth year since 9/11 when a lot of these issues have arisen, a response time of four hours is a reflection [that] we have people educated on these issues.”

—Staff writer Allison A. Frost can be reached at afrost@fas.harvard.edu.

Advertisement
Want to keep up with breaking news? Subscribe to our email newsletter.