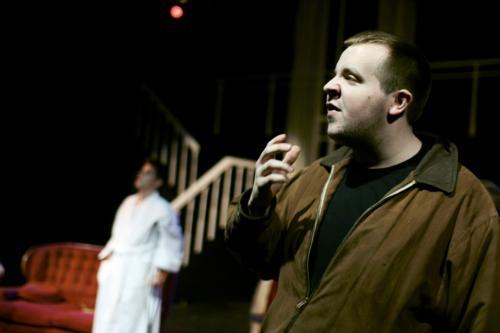 While wholly unacquainted with Tennessee Williams’ work, I went to see the Harvard-Radcliffe Dramatic Club’s production of “Cat on a Hot Tin Roof” with various expectations. After all, it couldn’t be too hard to peg some key elements that you would expect from any play about a Southern plantation family written by a Southern man. It would be depressing, charged with racial tension, and involve some sort of metaphysical decline.

Co-directed by Nathan D. Johnson ’09 and Allegra M. Richards ’09, set-designed by Courtney S. Thompson ’09, and produced by Kimberly D. Hagan ’09, “Cat on a Hot Tin Roof” turned out not to be the expected play about societal themes, but instead a brilliant rendering of a family’s private and inter-personal tensions. The production will be playing in the Loeb Experimental Theater November 9 through 16.

Williams’ play follows a plantation family through the course of patriarch Big Daddy’s (Benjamin T. Clark ’09) birthday. They have just discovered that Big Daddy has cancer, and the children try to win Big Daddy’s favor in the hopes that they will inherit the plantation. Meanwhile, daughter-in-law Maggie (Alison Rich ’09) attempts to save her marriage to Brick (David J. Smolinsky ’11), who has been an alcoholic ever since the death of his best friend (Will D. Kehler ’11).

Although there are only a few moments in which there is actually only one character on stage, the drama nevertheless centers around an individual performance. In Maggie and Brick’s first scene, Rich rattles off an impressive soliloquy. Brick lies listlessly on the bed and the relatives make a hullabaloo back stage, but Rich seems to be the only person in the theater. While Rich initially over-dramatizes her frustration, her character becomes increasingly real over the course of the play.

But there is also a wonderful rapport between the characters. The two daughters-in-law, Maggie and Mae (Olivia A. Benowitz ’09), are comically catty, and Elyssa Jakim ’10 is exquisite in each of Big Mama’s various personas. She overbearingly clings to her husband, nauseatingly caresses her son Brick, and is alternately sweet and severe to her daughters-in-law. All the time, her nasal voice and fluttering motions create the perfect, crumbling image of the Southern plantation mistress.

Of all the poignant scenes, the dialogue between Big Daddy and Brick is perhaps the most captivating. It is a perfect balance of two wholly different stories: The violent showdown between the two men who dominate both their family and the play, and the subtly tender heart-to-heart between father and son.

There is only one possible complaint about this scene. Clark’s execution of Big Daddy is flawless—he is every inch the crude-mouthed monarch of his family—but he has not quite acquired the Southern accent. Especially when he lectures from an arm chair, Big Daddy comes off more as The Godfather than a Mississippi aristocrat.

It cannot be stressed enough how vibrantly each actor portrays his or her character. The cast is a treasure chest, with gems even among the minor characters: Benowitz is fabulously annoying and provides much-needed comic relief, while her character’s husband, Jeffrey C. Witt ’09, is every inch the smooth Southern lawyer, right down to the immaculate part of his hair.

The immaculate characterization in the show is marred only by the ghostly presence of Brick’s dead best friend Skipper, played by William D. Kehler ’11. Rather than a problem of acting or character—Kehler never speaks—it seems to be more a problem of blocking and technically-produced ambiance. Rather than a ghost who sporadically interrupts Brick’s consciousness, Skipper seems to be a sketchy stranger who just happens to pop into the plantation house from time to time and fondle Brick.

Rather than populating the stage with the live cadavers of other Southern writers like Faulkner, the cast of “Cat on a Hot Tin Roof” brings the passions of Tennessee Williams’ 1950’s south to explosive life.

—Crimson reviewer April B. Wang can be reached at abwang@fas.harvard.edu.