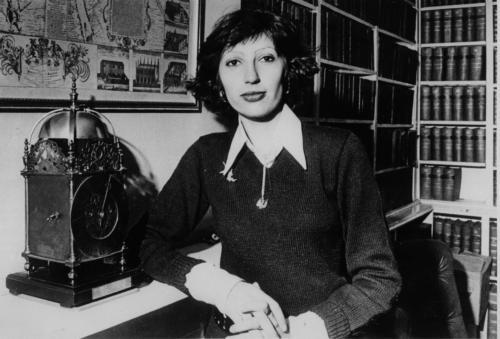 Benazir Bhutto '73, shown here after she was confirmed as president of the Oxford Union in 1976, was assassinated Thursday in a suicide attack in Rawalpindi, Pakistan.
By Aditi Balakrishna, Crimson Staff Writer

In 1969, a young Pakistani aristocrat arrived in Harvard Yard.

She was the daughter of the ruling elite, trained to never pick up a ringing phone or travel without a driver. She wore traditional dresses and told friends about her vacations with Chinese leader Mao Zedong. In private, her constant homesickness brought her to tears.

During her four years at Harvard, Benazir Bhutto '73, the shy girl from Eliot House known as "Pinkie," prepared for her rise as a political trailblazer. As turbulence rocks her home country after her assassination on Thursday, classmates remember Bhutto as a student driven by her love for Pakistan and set apart by the vigor of her convictions.

When the 16-year-old Bhutto began at Harvard, she had her eyes on a degree in psychology, seemingly not interested in making politics an academic focus, said Anne Fadiman '74, a friend of Bhutto. But Bhutto's focus quickly shifted to government and she wrote a senior thesis on the origins of Pakistan, Fadiman said.

"Something got galvanized in her while she was at Harvard," Fadiman said. "The longer she spent away, the stronger her focus on Pakistan became."

Bhutto called Harvard "the very basis of my belief in democracy" in a 1998 Crimson interview.

Longtime friend and former U.S. Ambassador to Croatia Peter W. Galbraith '73 said that Bhutto on occasion felt the strain of balancing her identity as a "normal undergraduate" with her patriotism in an environment that did always not support her homeland.

Though she protested the Vietnam War on the Boston Common with her peers, "above all she was a defender of Pakistan, which was a fairly unpopular country at liberal Harvard" because of military assaults on civilians in present-day Bangladesh, Galbraith said.

While in Cambridge, Bhutto quickly accepted American culture—donning jeans and sweatshirts from the Coop, according to her memoirs—even if she did not fully assimilate into it, Fadiman said.

In Eliot House, classmates knew Bhutto for her cake-making skills, fervent patriotism, and "white-hot intensity," said Eliot House resident Bruce E.H. Johnson '73, now a Seattle lawyer. Bhutto was initially shy, he said, but she "became more and more interested and open to her colleagues at college."

Known for her wit, intelligence, and beauty, Bhutto was well liked within the dorm community, Fadiman said.

Bhutto showed both "extremely young innocence" and a mature, cosmopolitan worldview, Fadiman said. She was also a skilled orator, eventually becoming the first Asian female president of the Oxford Union, a prestigious debating forum, during her graduate studies.

"Being able to speak beautifully had been part of the compulsory education for any politician in the 19th century," Fadiman said. "It no longer is, but it was for her."

Bhutto took her talent in communications to the doors of 14 Plympton St., hoping to write editorials for The Crimson, she said in 1998. The paper's editors at the time decided she was better suited for sports writing, but she was cut in the last round of the comp.

Bhutto maintained ties with Harvard after her graduation, delivering the 1989 Commencement address and donating $300,000 in 1995 to the Center for Islamic Studies at Harvard Law School.

In Pakistan, her political career took off, but not without hurdles.

In 1986, Fadiman attended a political rally in Pakistan and watched Bhutto speak, despite the threat of tear gas and arrest. She said that Bhutto appeared to believe "there were some things more important than one's own safety."

"She looked completely alive, and she did not look like someone who knew that she was going to spend that night and many nights thereafter in solitary confinement," Fadiman said, referring to Bhutto's imprisonment following the rally.

One of Bhutto's proudest accomplishments was breaking through the "glass ceiling" as a woman in a Muslim society, she told The Crimson in 1998. Bhutto became the first female prime minister of Pakistan and of any Islamic country in 1988 at the age of 35, a position she would fill twice.

After her second term as prime minister, Bhutto sought refuge in Dubai as an exile, driven out by charges of corruption. She may not have felt alive while in exile, Fadiman said, leading her back to her home country despite the volatile environment.

Bhutto returned from exile in October to lead her party in parliamentary elections, which are scheduled for Jan. 8. A sizeable victory for her party would have allowed her a third tenure as prime minister.

Bhutto's assassination has shaken Pakistan's political landscape and caused the government to consider postponing elections. At least nine have been killed by riots following her death, and analysts are pessimistic at best about the prospects for democracy.

"Her death is going to have a profoundly negative impact on the country of Pakistan," Galbraith said. "It is a borderline failed state and this risks pushing over the edge."

Fadiman hoped to see her college friend later this year when Bhutto came to the United States with her teenage daughter to visit colleges.

"Benazir was certainly not a perfect political leader, but she sure was a brave one," Fadiman said. "I think that she knew when she went back this time that there was a real chance she would be assassinated, but she went anyway."
—Jamison A. Hill contributed to the reporting of this story. —Staff writer Aditi Balakrishna can be reached at balakris@fas.harvard.edu.