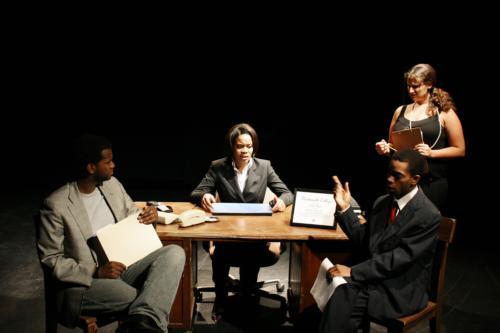 There is a theater crowd on every campus; they’re the students whose names you see over and over again on playbills, either under cast or production crew or both. The majority of the cast in BlackCAST’s production of “Fabulation” do not belong to this crowd. But I sure hope they join, because there are a couple of sensational actors in that show who I want to see over and over again.

Directed by Kristen D. Jones ’10 and assistant-directed by Andrew C. Coles ’09—both commendable first-time directors—and produced by Christian I.C. Strong ’09, “Fabulation” boasted an eight-member cast who adeptly handled the play’s 27 roles. The production, which ran April 12-14 in the Loeb Experimental Theater, had a few opening-night chips in its polish, but more than compensated with a fantastic script (by Lynn Notage) and great acting.

Christina L. Elmore ’09 played Undine, a self-made black businesswoman whose suave European husband (Brock W. Duke ’07) has just run off—taking the contents of her bank account with him and leaving her bankrupt. But Undine discovers that he has left her with one troubling compensation: she is pregnant.

Undine moves in with her parents in Brooklyn, a step that particularly stings because she had erased her past—by telling a magazine that her family died in a fire—when she first started moving up in the world. Throughout the next several months, Undine faces pregnancy, welfare, and the consequences of severing her past. She is also arrested for buying heroin for her grandmother.

Each act—aptly summarized in titles such as “A Grandmother’s Struggles” and “Department of Social Services”—is a bittersweet and wryly comical vignette of life on the other side of the tracks. There is a good deal of stereotyping and caricature in the script—complete with rappers, drug dealers, and prostitutes. But considering the BlackCAST actors’ abilities to employ those caricatures to profound dramatic effect, that exaggeration of character was not a bad thing.

At times, the caricatures did not quite work. The actors occasionally seemed to take it too seriously. Undine’s supposedly Spanish hubby (Duke) had mannerisms that were successfully affected, but his (Spanish? French? Italian? Made-up?) accent was incomprehensible. Nonetheless, other roles, such as those played by Jennifer C. Sullivan ’09, were out of this world.

One of the play’s greatest strengths was its ability to balance humor with the deeper implications of the play. “Fabulation” was diluted with an overall sensitivity as well as interspersed with scenes of intense gravity. I completely lost it when Elmore, in a grippingly emotional soliloquy, confessed that she had rejected her family even when her father had sent her his weekly lottery money.

Let me just spill it right now: Elmore is a jewel. She was impeccable as Undine from delivery to mannerisms to facial expressions: prim and proper and more than a little snooty, but progressively sensitive. She was hysterical (in the sense of both being funny and prone to hysterics), a little hyperbolic, and very aggressive. Elmore won my wholehearted support from the moment that she declared, “My ancestors came to this country shackled,” and refused to accept that everything she had worked for was gone.

But while Elmore’s acting was poignant, Sullivan’s was a blast.

Of the entire cast, Sullivan showed that she was out to have fun, with the result that she was the crowd-pleaser of the production. Sullivan seamlessly morphed from one role into another, cracking her gum as Undine’s not-too-bright valley-girl assistant, then smiling sickeningly over her clipboard and talking in a nasal voice as the counselor of a drug rehabilitation group. Her performance as the belligerent hooker who shares Undine’s jail cell was unforgettably comic.

So, that said: Jennifer Sullivan, where have you been for the past three-and-a-half semesters? This is Sullivan’s second time acting for the Harvard-Radcliffe Dramatic Club (she acted in “Lady Windermere’s Fan” last fall), but the Harvard community could definitely benefit from seeing more of her in campus productions.

There were a (scanty) few lapses in the production’s overall energy. The scenes set in Undine’s parents’ apartment ought to have been fraught with tension or frustration—after all, Undine has come home after over a decade of pretending that her family is dead—but they evoke instead a feeling of boredom.

Literary critic Robert Scholes coined the term “Fabulation” to refer to 20th century novels related to magical realism. But I prefer to think of it as stemming from the word “fabulous,” because that adjective most accurately describes my experience at this BlackCAST production.

—Reviewer April B. Wang can be reached at abwang@fas.harvard.edu.