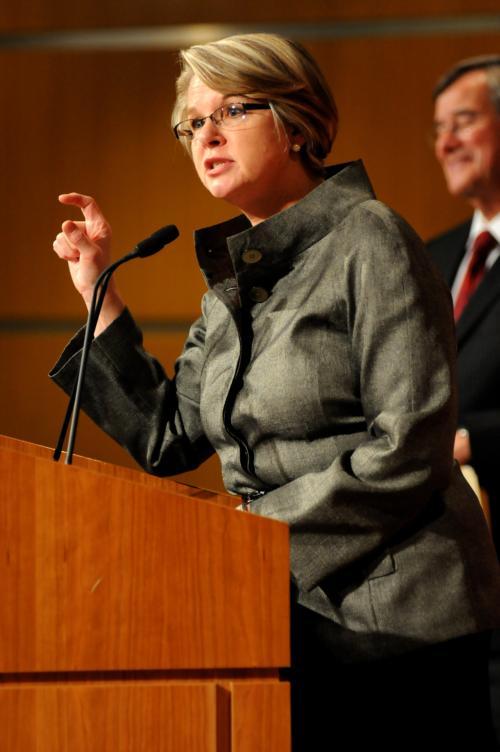 U.S. Secretary of Education Margaret Spellings speaks at the IOP yesterday about the future of the American education system.
By Victor W. Yang, Contributing Writer

In an address entitled “Educating America: The Will and the Way Forward,” Spellings announced the Department of Education’s newest initiative to simplify the federal aid application process. She is proposing to shorten the Free Application for Federal Student Aid from 120 questions to 27 and streamline the way that students qualify for financial help.

“It’s red tape like this that keeps 40 percent of college students from even applying for federal aid. That’s eight million students,” Spellings said.

The education secretary also acknowledged problems with the present structure of the American education system and the still-existing achievement gap.

“Is our education system all it should be? Is it preparing all of our children for success in college and the workforce?” Spellings asked. “In all candor, the answer is no, not yet.”

While she did recognize many of the pressing issues in our schools, Spellings focused her speech on potential areas of improvement and what she described as recent successes in reform. Spellings was one of the major proponents of passing the No Child Left Behind Act in 2002, and she cited the federal law as a major reason for improved test scores and reduced achievement gaps. The law mandates that schools must aim for all students to reach grade-level proficiency in reading and math by 2014.

In a question-and-answer session following the secretary’s speech, one teacher expressed doubt about the merits of the controversial reform program. Spellings responded by saying that the act created an accountability system and pushed for nationwide improvements in education.

“Only when we have information, do we have something to act on and pinpoint our problems on,” she said.

Sarah J. Ehrman, a first-year graduate student in the Education School, said that Spellings’ talk did change her skeptical attitude toward the government’s role in education. Ehrman also said she appreciated the secretary’s comment that the act will requires greater changes and that many changes still needed to be made in education.

“I’m not a huge supporter of NCLB, and so I wanted to hear the person who was a major proponent of this law,” Ehrman said. “I guess she was more out of the box than I thought.”