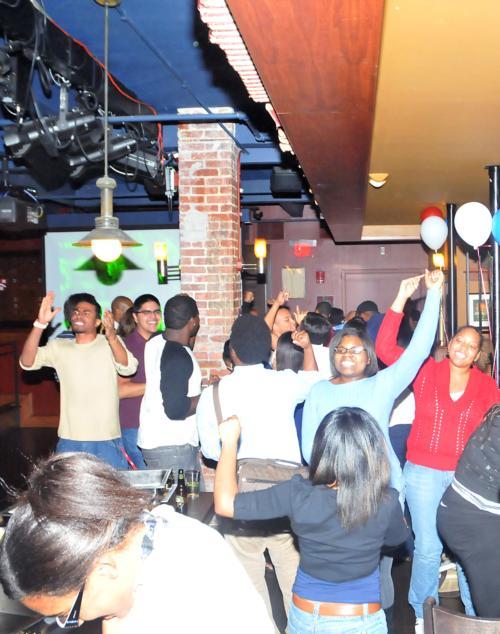 At 10:59 p.m., nearly 200 members of Harvard’s black community were packed into the Cambridge Queen’s Head Pub with their eyes glued to the television screens.

“Five, four, three, two, one,” they chanted, and then the room erupted. Scores of people raised their hands to their faces or jumped into the air. Barack Obama would be the first black president of the United States.

When the shrieking finally subsided, there was a brief, dazed silence before someone started the chant. “Obama, Obama, Obama.” More than two dozen people massed in the middle of the room. Standing in the center of the crowd, Ngozi Nwaogu ’12 sobbed as she hugged one friend after the other.

Nwaogu said that she was thinking of her nine year-old brother, who could now believe that he could be president too.

“For the first time in so many of our lives—for the black community, for everyone—you can really say that you can do anything,” Nwaogu said.

Outside, in the quiet hallway, Sumorwuo Zaza ’11 was too euphoric to remain still. He was slapping his friends on the back and repeating, “We are all Americans now. Welcome to our country.”

Even though the students in the pub last night were members of the Ivy League elite, many of them said they felt that a final barrier had fallen—for themselves, as well as for the greater black community.

Spencer H. Hardwick ’11, a native of Kansas City, Mo., said that people in his hometown had a hard time believing that a black man could actually win a national election.

But during the course of the campaign, Hardwick said, “I saw my barbershop change from ESPN to CNN.”

He said he had text messaged his barber earlier that evening, writing, “It’s looking really good for us right now.”

In the moments after Obama’s victory was declared, students called across the country to connect with family members. Many of them said that they felt that this was a moment for the generations that came before them.

Kameron A. Collins ’09 had tried to call his great-grandmother in North Carolina—a battleground state where Obama was leading by a razor-thin margin at press time. The 90-something-year-old sent in an absentee ballot for Obama to avoid long lines at the polls, Collins said.

With a black man in the White House, Collins said that his family thought she could die happy.

“There’s nothing else she could need or want to see,” he said.

Early in the evening, the Pub was the typical Harvard scene, election or no election. Textbooks were piled on the tables and students huddled over their laptops in the dimly lit room.

The momentum started building when Obama won Ohio at about 9:20.

“Oh yes, oh yes,” Malcolm R. Rivers ’09 said, scooping up one of his friends, who laughed and tried not to drop her plate of food.

By 10:15, the TI-89s had disappeared and the celebration had begun.

“I know I have a paper to write and I’m playing around, but I’m here,” said Jacqueline C. Hairston ’10. “Maybe Obama will write me a note.”

As the electoral votes trickled in, the crowd passed the time by erupting in spontaneous shouts of “O-bam-a, O-bam-a,” that gradually became a rendition of the Kanye West song “We Major.”

“I can’t control it, can’t hold it, it’s so nuts,” students sang as the song played on the loudspeaker.

Davone J. Tines ’09 sat anxiously in a corner watching the television screen silently, his laptop sat at his side, open to a mostly red map of his native Virginia.

“I’m excited but on edge,” he said. “If he wins, just think about the impact its going to have on the next generation.”

Rivers, the son of Reverend Eugene Rivers ’83, a Boston community organizer, said that when he voted in Dorchester earlier in the day, the level of excitement was palpable.