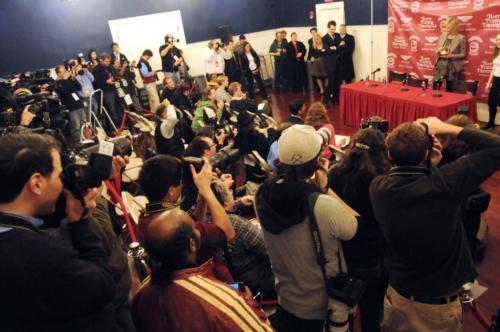 The Hasty Pudding honored Charlize Theron, the 2004 Academy Award winner for Best Actress, in their annual Woman of the Year parade. The event culminated with a roast and a press conference at the New College Theatre.
By Chelsea L. Shover, Crimson Staff Writer

Sandwiched between two actors—a belly dancer and a yellow-coifed drag queen wearing insect antenna—the Oscar-winning actress shouted to the driver of the orange Bentley convertible in which she rode.

Theron kept everyone laughing, dancing, and teasing her buxom escorts as the car crept down Mass. Ave., flanked by bystanders hoping to catch a glimpse or a snapshot of the passing motorcade.

Thea N. Lee ’11 said she had seen Paris Hilton at an event held yesterday by the Harvard Lampoon, a semi-secret Sorrento Square social organization that used to occasionally publish a so-called humor magazine. But Lee said the Pudding’s Woman of the Year parade was far more exciting.

“For some reason, it didn’t seem all that out of the ordinary to see Paris,” Lee said. “I was definitely starstruck when I saw Charlize Theron.”

The parade ended at The New College Theater for the Woman of the Year roast. Sitting in the middle of the theater, Theron listened to hosts Evan W. Eachus ’08, president of the Pudding, and David J. Andersson ’09, vice president of the cast, begin their presentation.

Theron held a pink stuffed animal, but she soon flung it at the duo when they began to recall her earliest work as an actress.

Eachus and Andersson then called Theron to the stage and asked her to identify an alien among three Pudding actors—a nod to the 1999 film, “The Astronaut’s Wife,” in which Theron’s character does not realize her husband is an alien until the end of the film.

Next, a Pudding actor impersonating Keanu Reeves came out to taunt Theron for ruining their duet in the film, “Sweet November.” Faux-Reeves demanded that Theron demonstrate her abilities as a “triple threat”–dancer, actress, model. The former ballerina broke it down to “Sandstorm,” showed her acting chops by wooing an elephant in Afrikaans, and struck runway poses wearing a huge fake nose.

Satisfied with her talents, the hosts finally awarded Theron the Pudding Pot—the prize normally given each Woman of the Year—which contained a slip of paper with a phone number.

Borrowing a cell phone from someone in the front row, she called the number, and a stagehand emerged from behind the curtains. Theron hugged the student and kissed his cheek before he hurried backstage.

“I love it, you get a hasty pudding that you can’t eat and a number from a man who walks away,” she said.

Theron then thanked the Pudding for selecting her.

“On a serious note, this is really sweet,” she said.

“I’m probably pregnant, but that’s good; I’ll be having a Harvard baby in nine months,” Theron added, remarking on her alcohol-soaked welcome.

After the roast, the Pudding performed a preview of their next show, “Fable Attraction,” before Theron held a press conference.

Responding to a question about how being named Woman of the Year compared to winning an Oscar, Theron quipped, “I want to say I’ve never been surrounded by so many fake breasts, but I was at the Academy Awards.”

Theron also spoke about dropping out of high school to move to Italy; about her marginal preference for Barack Obama among the presidential candidates (“there’s not one that’s making me go ‘yes!’”); and her various awards (“I really don’t care about any except Sexiest Woman Alive”).

Theron said she plans to continue being the Sexiest Woman Alive, an award from Esquire Magazine—with one modification.

“Now I will carry a little pot next to me,” Theron said, as she struck a modelling pose with her newest trophy.

—Staff writer Chelsea L. Shover can be reached at clshover@fas.harvard.edu.