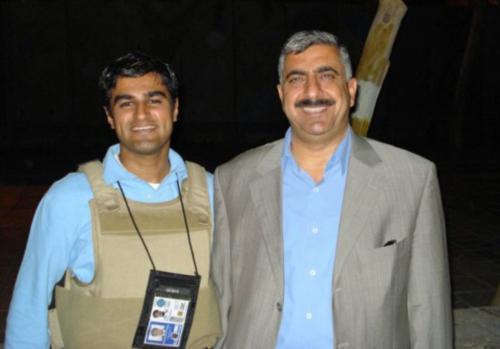 Senor, who graduated from Harvard Business School (HBS) in 2001, was part of the Coalition Provisional Authority’s first civilian convoy, charged with launching the reconstruction effort in Iraq. He calls his arrival “a bizarre experience.”

Driving 15 hours in SUVs from Kuwait to Baghdad, the convoy entered the city with no clear destination. They drove around, looking for a building suitable for their headquarters. The convoy eventually picked the Republican Palace—formerly Saddam’s primary seat of power—and took over the facility. Senor says the first days in the palace were challenging.

“It was 115 to 120 degree heat. We had to shower using water bottles. We had nothing. We were just eating MREs,” Senor said, referring to military-issue food packets.

Senor said he and roughly 100 colleagues transformed the facility into a “totally functioning reconstruction headquarters” in a matter of months.

The area around the Palace—four square miles surrounded by high cement walls on the banks of the Tigris River—soon became known as the Green Zone. Today, the Green Zone houses Iraq’s new U.S. Embassy, which cost $600 million and is roughly the size of Vatican City.

From crowding in the Palace basement during rocket attacks to watching Iraqis draft their constitution, Senor and two other Harvard graduates described life inside the Green Zone as alternating between deep frustrations and exhilarating highs. Their stories paint a picture of a post-invasion Iraq shackled by poor planning and missteps in Washington but struggling, they said, toward a distant yet bright future.

SHORT OF RESOURCES, UNDER FIRE

Senor spent the 1990s in the public sector, serving in foreign policy advisory and communications roles. After graduating from HBS in 2001, Senor worked at the Carlyle Group, a private equity firm peopled with members of the first Bush administration, until 2003. He then co-founded Rosemont Capital, a private equity firm, with HBS classmate Christopher D. Heinz.

Senor’s original 90-day assignment in Iraq was eventually extended to 15 months, making him one of the longest serving civilians in Iraq. In that time, he served as the Bush administration’s chief spokesperson in Iraq and a senior adviser to Presidential Envoy L. Paul Bremer III.

In the early days, Senor said he and his colleagues faced a deteriorating security situation as they strove to launch a reconstruction effort that lacked basic resources and skilled personnel.

In the first few months after the regime fell, Senor said, he felt safe traveling around Baghdad and other parts of Iraq. He recalled eating in local restaurants with Bremer, who graduated from HBS in 1966, accompanied by a small security detail.

But Senor said the turning point came when a truck bomb ripped through the United Nations’ Iraq headquarters in August 2003.

“That’s when we realized the insurgency was brewing.”

Soon after, Senor began to give daily press briefings with Brig. Gen. Mark T. Kimmitt, a fellow HBS graduate. He said he and Kimmitt became targets for the insurgency.

“I was on Iraqi television every day and Al-Jazeera and other satellite channels,” he said. Senor now works as a Middle East and national security analyst for Fox News. “People knew who I was and who he was.”

Senor said he decided not to travel with a security detail, but said he became more cautious after his chief of staff was killed when rockets hit the Hotel Al-Rashid, where many Coalition personnel lived.

The Coalition faced a lack of support from Washington, even as they came under attack from the insurgency, he said.

Senor described a pressure-cooker environment as Coalition officials worked around the clock to compensate for the time difference between the Green Zone and the White House.

“I would start at 6:30 and go through my Iraqi day,” Senor says. “Then as my day was winding down, Washington was just starting to wake up, and the U.S. press and the U.S. government and the British government had all sorts of needs of their own.”

Reconstruction was undermined by a war strategy that defined success as simply decapitating’s regime and stamping out the insurgency, Senor said.

“Our security strategy was predicated on the idea that it wasn’t our job to protect the local Iraqi population. Our job was to do search-and-destroy missions against the insurgents and against the al-Qaida affiliates,” he said. “And that was the exact wrong strategy.”

Senor said he wishes the Coalition had entered Iraq with a different agenda and more troops.

In addition to repairing an infrastructure in shambles, the Coalition also needed to jump-start the Saddam-era Iraqi economy.

Thomas C. Foley ’75 arrived in Baghdad in August 2003 with the task of privatizing many of the country’s 192 state-controlled companies. After graduating from HBS in 1979, Foley worked at McKinsey & Co. and Citigroup’s venture capital arm before founding NTC Group, a private equity firm, in 1985. He was tapped by the Bush administration in August 2003 to serve as the Coalition’s director of private-sector development.

“I could have been on a different planet because I had no military experience, and I had not served in government before and hadn’t been to the Middle East,” said Foley.

He drew on what he had learned about transition economies as an undergraduate in Harvard’s economics department as he worked to modernize Iraq’s stock exchange and commerce law, Foley said.

“There are very clear examples in the experience of Eastern bloc countries about what needs to be done,” Foley said.

“We had about 1,500 professionals administering a country the size of California with two-thirds of the population,” he said.

But Foley—who received a Defense Department commendation in 2004 for his work in Iraq and now serves as the U.S. ambassador to Ireland—said the slow pace of reconstruction was unavoidable.

“The...skills and resources and the other things you need to build infrastructure—hospitals, businesses, for example—weren’t there, and it just takes a long time,” he said.

More recently, there have been signs that new strategies—military and civilian alike–have begun to make a dent in the insurgency and encourage the development of a working Iraqi government.

Junaid M. Munir, who graduated from Harvard Law School in 2001, was a litigation associate and a judicial clerk before he joined the United States Foreign Service in 2004. Munir was first posted at the U.S. consulate in Jeddah, Saudi Arabia. Two weeks after his arrival, al-Qaida gunmen attacked the consulate, killing five staff members. Munir said the attack galvanized his commitment to serve the U.S. overseas. In 2006, Munir transferred to Paris to head up U.S. outreach to French Muslims. But Munir said he wanted to contribute where the need was greatest, and he signed up to go to Iraq.

In December 2006, Munir was assigned to the U.S. Embassy’s Provincial Reconstruction Team for Anbar Province, a joint civilian-military group that supports the provincial and local governments in the primarily Sunni region in western Iraq. Munir served as the liaison between Ramadi—Anbar’s capital—and Baghdad, where Anbar’s provincial government had fled to escape insurgent violence.

Before Munir arrived, Ramadi was widely considered the most dangerous city in Iraq. But in mid-2007, tribal leaders in Anbar formed a pact to fight al-Qaida extremists in the province, and Anbar has since transformed into a model of stability touted by U.S. officials.

“People got tired of the violence, and average Anbaris and tribal leaders started working with coalition forces and with the Iraqi government,” said Munir.

(The Wall Street Journal reported at the time that the sheiks had additional motivation to cooperate, in the form of significant cash payments from the Marines.)

Munir said the change in daily life in Anbar’s capital was striking.

“When I first arrived in Ramadi, the streets were deserted, and there were constant sounds of gunfire,” Munir said. “But by the time I left in November ’07, we never heard gunfire. Kids were walking to school. Marketplaces were open. Normal life was returning.”

Munir now works at the U.S. embassy in Jordan and said that he is scheduled to hold diplomatic posts in Syria and Tunisia in the next few years.

Though experts have said the Anbar model may be difficult to replicate, Munir, Foley, and Senor all said that the latest U.S. strategy in Iraq—dubbed the “surge” because it raised troop levels by nearly 30,000—has dramatically improved security in Iraq as a whole.

Five years after the invasion, the U.S. is spending 10 to 12 billion dollars each month in Iraq, and many Americans have begun to clamor for withdrawal.

Senor said that while the costs are exorbitant, he believes a premature U.S. withdrawal would lead to a failed Iraqi state that would require eventual re-occupation.

“I know a lot of Iraqis and they’re friends of mine, and it terrifies me, and they’re terrified,” says Senor, who is currently writing a book about the Middle East. “Even our biggest critics inside Iraq don’t want us to leave, and so there’s nothing to me so short-sighted or maddening than the notion that we should pull out.”

Foley said he believes Iraq will eventually see a representative government, rule of law, and protection of basic human rights.

“I’m quite confident in five to maybe as long as ten years that those goals will be achieved in Iraq. There’s very little doubt in my mind,” Foley said.

But Foley said that it remains to be seen whether the war will be “worth the cost in dollars and lives.”

“We can’t decide that yet because we don’t know what the outcome is yet and what the impact of the outcome will be, but our children and our grandchildren will probably figure that out for us.”

—Staff writer Nini S. Moorhead can be reached at moorhead@fas.harvard.edu.