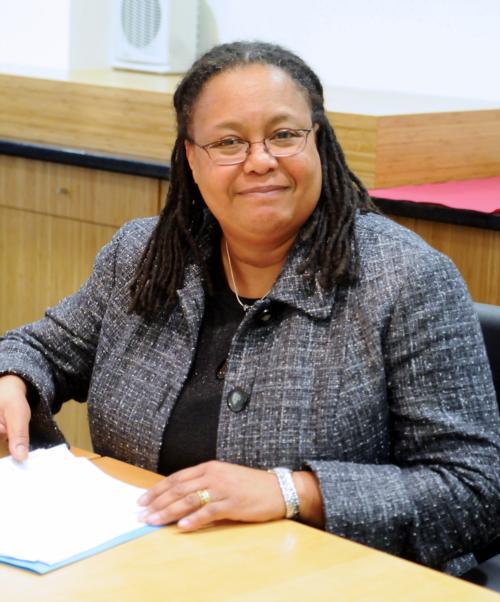 Evelynn M. Hammonds is the first woman to serve as dean of Harvard College.
By Aditi Balakrishna, Crimson Staff Writer

Hammonds, who is tenured in both the History of Science and the African and African American Studies departments, will become the first woman to assume the decanal post.

“Evelynn is my choice as the College dean because, first and foremost, she’s the best person for the job, independent of the fact that she’s a woman and an African-American,” said Dean of the Faculty Michael D. Smith in an interview. “I think the fact that she’s both of those things will bring a unique perspective that perhaps we haven’t had in the past.”

Hammonds said yesterday that her two “co-equal” priorities upon taking the reins of the College will be making progress on the University’s plan for House renewal and implementing the new General Education curriculum.

In the coming months, she will be working with Smith and Pilbeam to transition into the position, though she still has responsibilities and ongoing projects to complete before leaving the provost’s office.

She added that while she has enjoyed her current job—advising the president and provost on issues surrounding the recruitment and advancement of women and minorities in faculty positions—she looks forward to having the opportunity to work with students as dean of the College.

“I don’t get to spend as much time with students as I like, and that’s one of the reasons I became a professor,” she said. “I saw this as an opportunity to get back to doing the things that I like.”

When Benedict H. Gross ’71—Pilbeam’s predecessor—entered University Hall in 2002, the role was split between a dean of undergraduate education responsible for academic affairs, and a dean of the College who oversaw matters of undergraduate life.

Though the position was consolidated under Gross, the question of whether or not the deanship would remain in its current form for Pilbeam’s successor was somewhat uncertain, prior to yesterday’s announcement.

Gross stepped down from the deanship last summer, leading Smith to appoint Pilbeam to serve in the interim while a search for Gross' permanent replacement was conducted.

“[Dean Smith and I] view it as being one,” Hammonds said. “Certainly, it’s a big job...so we’ll see how we need to distribute responsibilities for other people in the office.”

Students consulted by Smith during the dean search emphasized the importance of accessibility in a new College dean. During her tenure, Hammonds hopes to interact with students directly.

“Overall, I hope my time as dean will be remembered as one where students were engaged, students were listened to, students were involved in helping to produce a better quality of life and better educational opportunities,” she said.

But Hammonds said she is still in the process of learning the details of Administrative Board reform and the College’s alcohol policy, both of which have made waves over the course of this academic year with students.

“She’s a wonderful person to work with,” Higginbotham said. “She’s an excellent scholar and a thoughtful person.”

Harrington added that Hammonds’ work in the provost’s office will add “breadth of vision to the job.”

Pilbeam, who has declined in-person interviews with The Crimson since December, wrote in an e-mail that he is “thrilled” about Hammonds’ appointment.

—Christian B. Flow contributed to the reporting of this story.

—Staff writer Aditi Balakrishna can be reached at balakris@fas.harvard.edu.