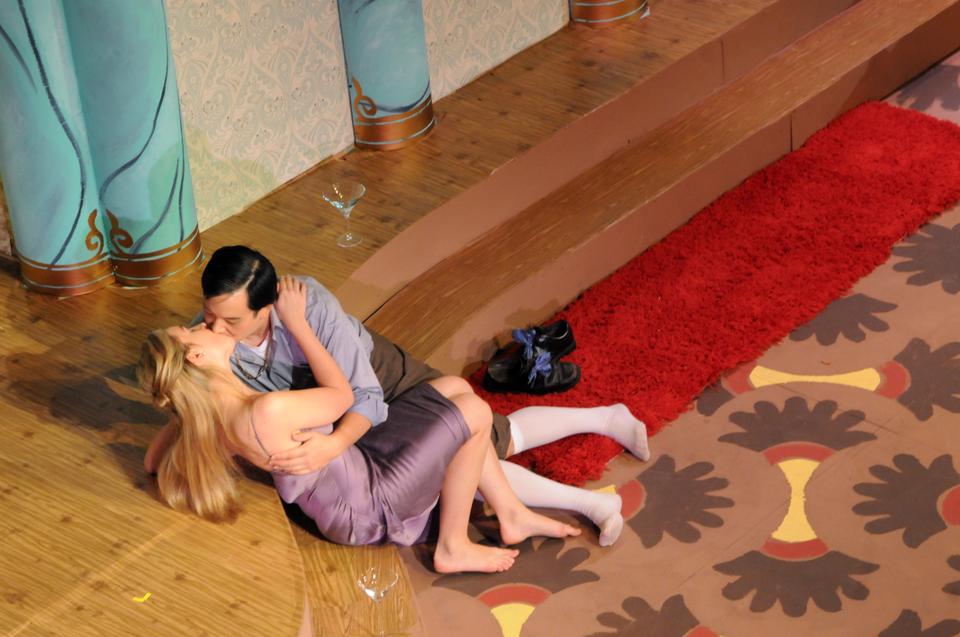 “Semele,” which ran this weekend in the New College Theatre, tells the tale of classic lovers Semele and the god Jupiter. Through flawless performances and moving its setting forward to the 1970s, the production delightfully updates the eighteenth century opera.
By Marissa A. Glynias, Crimson Staff Writer

There’s nothing inherently modern about John Eccles “Semele.” Written at the beginning of the 18th century, the Baroque opera narrates an Ancient Greek myth about a mortal protagonist whose jealousy for her divine lover costs her her life. But Harvard Early Music Society’s production of “Semele,” which ran this past weekend at the New College Theatre, manages to spruce up the antiquated setting quite a bit, perhaps predictably arranging the action in America’s own period of mythical free love and divine (ahem, drug-induced) revelation: the groovy 1970s. Nuanced but still exciting, “Semele” shows that Baroque opera can still be fun.

At its core, “Semele” is a familiar story—men will say anything for sex. In this case, the man (or god) is Jupiter (Joshua Taylor), the king of the gods, and the focus is on his affair with Semele (Kathy D. Gerlach ’07, GSAS ’13), a mortal. At the guileful behest of Jupiter’s divine consort, Juno (Stephanie Kacoyanis), Semele withholds intimacy until Jupiter promises to give her immortality and show her his true form, a move which ultimately kills her.

Written by John Eccles, the piece itself is an archetypal example of Baroque opera. Each character sings recitatives (narratives that serve the purpose of advancing the story) and arias (songs that do not move the plot forward). Characters are accompanied by a small pit orchestra of strings and a harpsichord. Eccles’ “Semele” is a more sexually graphic version than the better-known Handel opera of the same name. Because the Early Music Society shifts the setting of the story, however, the raunchy nature of the opera does not seem as out-of-place as it might have at the time of its creation.

The costume design of “Semele” orients the audience immediately to the ’70s. Costume designers Janice J. He ’11 and Ashley N. Kaupert ’12 ensure that each costume has at least a hint of either the disco era or flower power. For example, the priests wear bellbottoms or a long, flowery skirt with a headscarf. The dresses of Juno and those of Iris (Aria L. Guarino ’13), the goddess of the rainbow and handmaiden to Juno, are ball gowns with an inner layer of flashy neon fabric showing through. Although the costumes remain fairly true to the ’70s setting throughout the show, at one point, Jupiter changes from his mortal appearance—decked in a brown leather jacket—to his deified appearance, which features a white ponytailed wig. Juno, as well, sports a white wig. Both headpieces are reminiscent of early British royalty, and show that the couple is the oldest and most experienced of the gods—a revelation cohesive with the idea that they ultimately stay together because of tradition, though not without a little trickery.

The cast of “Semele,” remarkably, is without a single weak link. Each member displays a mastery of his or her part, with almost flawless singing and acting. This is even more to their credit in light of the diversity of experience levels throughout, from debuting actress Guarino in a stand-out performance, to operatic veterans such as Gerlach and Taylor.

Lily T. Kass ’10, as Ino, Semele’s sister, and Robin W. Reinert ’10, as Cupid, are particularly notable. Kass—decked out in a bright mini-skirt, white tights, and high heels—plays Ino perfectly. Her lovelorn glances and flirtatious advances towards Semele’s betrothed, Athamas (Clare McNamara), provide much of the comic relief throughout Act I. More than just funny, Kass fills the role of the unappreciated lover with darling and panache. During Athamas’ aria about Semele’s insensitivity, for instance, Kass checks her makeup and bats her eyes lovingly. Her attempts are not for naught, as she and Athamas become engaged by the end of the opera.

When Kass isn’t on stage providing comedic action, Reinert takes her place there with spunk and energy. Portraying the playful and mischievous cupid, Reinert is garbed in a mismatched white and red-checkered shirt and pants, with a pair of aviator shades to match. Not only are her arias beautifully sung, but she is constantly in character, whether snuggling next to the sleeping Semele after Jupiter has left her, or serving drinks in Solo cups to the cast while they sing joyfully about everything working out the way it should have. This, the final scene, is especially hysterical. Semele dies, Ino and Athamas become engaged, and the entire cast joyously celebrates, completely ignoring Semele, whose corpse remains noticeably on stage.

The only thing that detracts from this production is that, at times, the pit orchestra overpowers the vocalists. Although this is an infrequent occurrence, it distracts from the action on stage and causes the lines in certain scenes to be lost.

Without a boring moment, “Semele” takes the audience on an exciting journey through this mythological tale, masterfully incorporating the dated material into a more functional setting. And though Eccles’ Baroque opera is ‘broke,’ in this production, the Harvard Early Music Society fixes it.

—Staff writer Marissa A. Glynias can be reached at mglynias@fas.harvard.edu.