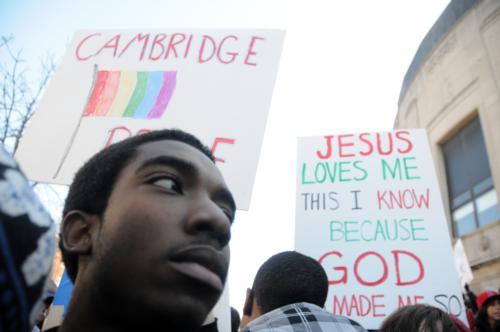 At 11:24 a.m., six members of the anti-gay religious organization—including a 15-year-old girl and an 8-year-old boy—finally appeared, entering the area the Cambridge Police had designated for their protest. From the other side, separated by two fences and a neutral zone, the counter-protestors began chanting loudly, drowning out the church group’s words and songs.

Last month, the Kansas-based Westboro Baptist Church, whose nationwide picketing activities against homosexuality have earned them a “hate group” designation, announced their plans to protest the high school’s gay-straight alliance, Project10East. Since then, the school had worked with the mayor’s office and the police department to determine an appropriate response.

When the day finally arrived on March 13, the protests engendered an ironic consequence: although they propounded a divisive message, their effect on the community was decidedly uniting.

According to Jeffrey M. Walker, the mayor’s chief of staff and a member of the city’s GLBT commission, the initial plan was simply to ignore the protest. Later, after realizing that many Cambridge residents were going to plan their own protests, city leaders decided to act as the unofficial coordinators of the counter-protest for safety reasons.

But Walker noted that—despite its homophobic slogans—the WBC can bring unexpected benefits to the community.

“What I sometimes secretly believe is that they’re gay rights activists,” he said. “They galvanize the community in a way that wouldn’t necessarily happen if they didn’t deliver their crazy hatred message. Because they’re so extreme, they get people to come out and respond to them.”

Christopher M. Mason, a Cambridge GLBT commissioner who organizes Phelps-a-thon fundraisers—named after WBC leader Fred Phelps—to raise money for every minute that the WBC is holding a protest, said that the WBC encourages unprecedented unity among its opponents.

“They’re bringing conservatives and progressives together and that’s a positive thing. That rarely ever happens, so if Fred Phelps can make it happen that’s great,” he said.

Those protesting the WBC—including students, teachers, city officials, clergy members, and Harvard students—saw the counter-protest as an opportunity to celebrate unity.

“The most important message of today’s counter-protest is that the students of CRLS are loved and respected and when haters attack their school, we will have their backs,” said Sue Hyde, a leader in the National Gay and Lesbian Task Force.

The Westboro Baptist Church was founded in 1955 by Rev. Fred Phelps with an anti-gay agenda. The group has 213 members, a majority of whom are related to Phelps.

According to the church’s Web site, www.godhatesfags.com, its members “adhere to the teachings of the Bible, preach against all form of sin (e.g. fornication, adultery [including divorce and remarriage], sodomy), and insist that the sovereignty of God and the doctrines of grace be taught and expounded publicly to all men.”

Famous for picketing Matthew W. Shepard’s funeral, the group also holds anti-gay protests at productions of “The Laramie Project”—a play based on Shepard’s murder—and the funerals of AIDS victims. Recently, they have begun demonstrating at soldiers’ funerals across the country, saying that their deaths are evidence of “God’s judgment” of America.

The group also stages protests near high schools, like CRLS, that have a gay-straight alliances.

“I think Fred Phelps is a man who has not enough to do,” said Mayor E. Denise Simmons.

The church has demonstrated in Cambridge in the past, including at Harvard’s commencement in 2003 and at the city’s celebration of the legalization of same-sex marriage in 2004.

The WBC members, who have conducted over 40,000 protests, state on their Web site that they preach hate “because the Bible preaches hate.”

Christopher Ott, the communications manager for the ACLU of Massachusetts, said he believes that the WBC’s message is “reprehensible” but upholds their right to state their opinions.

“As long as they stay within the law, they have the right to free speech,” Ott said. “And for those who are unhappy with what they think, they have of course the same right.”

The response within CRLS was organized by the Rainbow Coalition, a group of students led by Project10East coordinator Kathy Keegan.

While some students wanted to stage a “flamboyant” counter-protest, others thought it was best to ignore the group completely. Principal Christopher Saheed emphasized that student safety was of the utmost importance, saying that he preferred that students not engage directly with members of WBC.

Ultimately, the activities planned for the students were not open to the public.

On Thursday afternoon, the coalition members held a screening of “Milk,” the biographical film about gay activist and politician Harvey Milk that recently won two Academy Awards. On Friday morning, they handed out pink triangles—symbols of gay pride—during the students’ homeroom period. Mayor Simmons also spoke at a rally held by students during the first half of lunch.

The public protest was held in a fenced-off area behind the school.

Although students were not officially allowed off campus during the protest, many students joined the larger demonstration during their lunch period.

Jacob M. Harris, a junior at CRLS, brought a life-sized plastic cow to protest against the WBC.

“I think it’s ridiculous that they are here and this [cow] is just as ridiculous,” he said.

Singing “All You Need Is Love,” a mass of counter-protestors arrived in a parade around 11 a.m. While others danced to “I Will Survive,” Andrea Hart of Art Street-Sidewalk Sand drew peace doves on the sidewalk “to remind people we’re here about creating love, not hate.”

The WBC members carried signs that read, “Thou Shalt Not Kill,” “God Hates You,” and “God Hates Obama.”

Elizabeth M. Phelps, daughter of Fred Phelps, said she disapproves of the President because he “fiercely” supports gay rights.

“Obama is rising out of the sea of people like the anti-Christ. He is going to usher in the final destruction,” Phelps said, adding that the process will be “thrilling” to watch.

“We’re here to tell the young people of doomed America that they are the last generation and the most cursed. They have no jobs, no homes, no prospects, just curses,” said Margie J. Phelps, another daughter of the Church’s founder. “They are the legacy of their lying preachers, teachers, and parents, who also hate them.”

“The only hope for them is to obey God,” she added. “Period.”

Several representatives from Cambridge churches, who wrote a joint letter to the community criticizing the WBC before the protest, said they did not condone the group’s message of hate.

“We do not support the gay/homosexual lifestyle based on our belief. However, we do have gay and lesbian people in our congregation and we feel that kind of language is unacceptable,” said Bishop Brian Greene from the Pentecostal Tabernacle Church.

Father Antony Hughes, the pastor of St. Mary’s Orthodox Church, said he believes the WBC interpretation of the Bible is “blasphemous” because it is a misrepresentation of God.

“The scriptures are very plain. He is very loving,” he said.

Hughes also said he objected to the Phelps’ decision to include their children in their protests.

Elizabeth M. Phelps, who also brought her eight-year-old son Daniel J. Phelps, said in a Crimson interview that he has been to about 2,100 protests so far. He said that he enjoyed protesting “because it’s fun and there’s a whole audience here.”

Lydia R. Phelps-Davis, the 15-year-old granddaughter of Fred Phelps, also said she was pleased that so many counter-protestors showed up.

“They’re angry because they know we’re right, but they don’t want to believe us,” she said. “That is why there’s this huge crowd over there shouting at us, thinking they’re going to get somewhere with us.”

Evelyn R. Wenger ’11, the campaigns director for the Harvard Democrats, said that she was disquieted by Phelps-Davis.

“She was dancing along with glee on her face and I found that disturbing,” Wenger said.

About 50 Harvard students and tutors, organized by the Harvard Democrats and the Harvard College Queer Student and Allies (QSA), participated in the counter-protest.

“We’re going [to CRLS] to show support for the students and to let them know that the students there deserve respect,” said QSA Co-Chair Marco Chan ’11.

“I felt like we did a good job of accomplishing our goal,” he said. “The tone remained relatively positive.”

Wenger also said she believed that the message of unity and respect was generally maintained, but she added that it “devolved a little bit.”

“There were a couple of [chants] that were kind of negative and more personal than I would have liked.” Wenger said. “But generally nothing was bad or really mean-spirited.”

According to its Web site, the WBC members plan to return to Cambridge this Friday to protest Harvard specifically. They plan to assemble on Quincy Street, right outside the Barker Center.

Members of the Harvard Democrats and QSA who are organizing the response said they hoped to sustain the positive tone.

Wenger said that Harvard’s counter-protest, which will be more of a celebration with live music, will not have an official schedule of events.

Several Christian groups have also taken a stance against the WBC.

Rachel A. Esplin ’10, president of the Harvard Latter-day Saint Student Association, said she believes the WBC is “distorting the gospel of Christ.”

“I can definitely say we don’t support the beliefs and practices,” Esplin said. “We believe in loving all people.”

­—Staff writer Sofia E. Groopman can be reached at segroopm@fas.harvard.edu.

—Staff writer Michelle L. Quach can be reached at mquach@fas.harvard.edu.