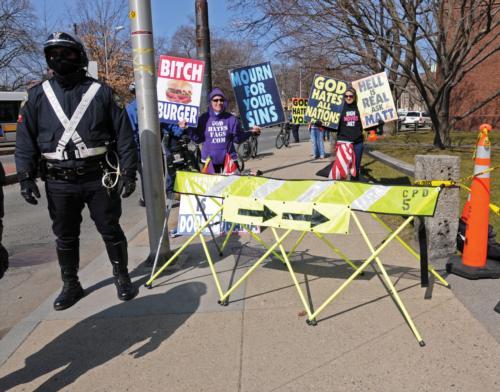 Approximately 200 counter-protestors from Harvard and the local community gathered on Mass. Ave on the day most students were departing for spring break to demonstrate against the Westboro Baptist Church—one week after a similar protest at the Cambridge Rindge and Latin School.

Five members of the Kansas-based church, whose nationwide picketing activities against homosexuality have earned them a “hate group” designation from southern non-profit legal authorities, demonstrated in an area flanked by Cambridge Police, who maintained a perimeter guard during the entirety of the protest.

Although the group had planned to picket near Lamont Library, they announced the day before the protest that the location would be changed to Harvard Law School.

Shirley Phelps-Roper, who was carrying a sign that read “Bloody Obama,” said the Church was picketing at HLS specifically to protest the new president.

The distance—about ten feet—between the opposing groups was smaller than it was at the previous week’s protest at Cambridge’s only public high school. The shorter divide allowed some of the counter-protesters to respond directly to church members.

“Having a face-to-face conversation with Shirley Phelps[-Roper] really gets your blood going,” said James D. Hills ’11, who stood near the front of the crowd, wearing an American flag as a cape.

Among the counter-protesters were members of the Harvard Glee Club, who led the group in a rendition of “This Land is Your Land.” The Westboro protesters answered with their own version of the song, which replaced the lyric “This land was made for you and me” with “This land is headed straight to Hell.”

The counter-protest, which was organized by the Harvard College Democrats and the Harvard College Queer Student and Allies, included a Phelps-a-thon fundraiser—named after Westboro leader Fred Phelps—which raised over $1000 for Cambridge Cares About AIDS.

The counter-protesters also made a “wall of love”—a sheet decorated with signatures and positive messages—to be displayed in the College’s BGLTSA Resource Center.

QSA Co-Chair Marco Chan ’11 said he was glad that there was much diversity among the counter-protesters.

“You don’t have to be GLBTQ to say that homophobia is unacceptable,” Chan said.

Most counter-protesters who had also participated in the earlier protest said they believed the second demonstration had been more positive.

“This one felt more like a celebration to me, which is ultimately what it should be,” said Eva Z. Lam ’10, president of the Harvard Democrats. “If you see them more than once you realize they’re not really that interesting. They’re just four or five crazy people with signs, some of which don’t even make sense.”

—Staff writer Sofia E. Groopman can be reached at segroopm@fas.harvard.edu

—Staff writer Michelle L. Quach can be reached at mquach@fas.harvard.edu