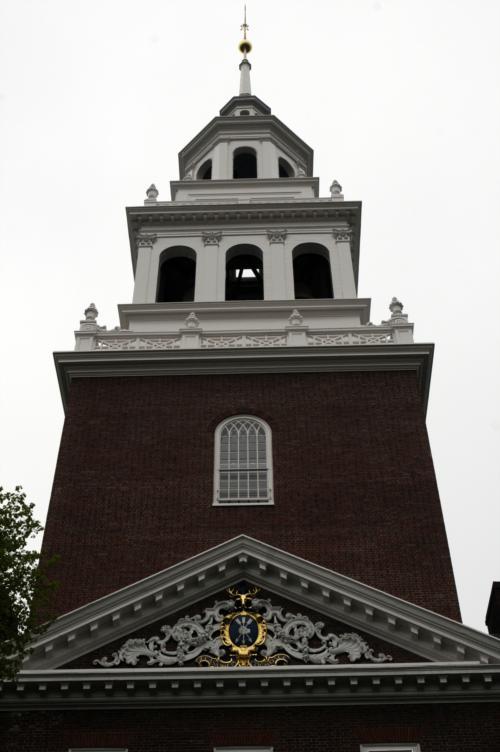 The Danilov bells—which preceded the current set—were donated to Harvard by an American industrialist Charles R. Crane in 1930. They narrowly escaped the fate of most other Russian bells that were, at the time, being destroyed by Stalin’s regime. They were returned in 2008 to their original home, the Danilov Monastery in Moscow, after many years of negotiations, in exchange for the new set of 17 bells that now hang in Lowell’s Bell Tower.

Channing Yu ’93, who has been conducting the performance for the last few years, turned to the audience in a crowded Lowell Dining Hall to introduce the piece. “This is an annual tradition dating back to the first decade of the House,” Yu said. “[But] this is a very special year, as it will be the first performance with our new bells.”

The show—complete with hydrogen balloons to simulate cannons—brought together students, faculty, and Cambridge residents alike.

Noam D. Elkies, professor of Mathematics, was among the makeshift orchestra, playing the electric keyboard and blowing into a kazoo.

The orchestra relocated to the dining hall from the courtyard, which usually houses the performance, due to weather conditions. But the bells still made an appearance in the performance when Yu cued the bell ringers—more properly called the Klappermeisters—with a call from his cell phone.

Elif I. Batuman ’99, a freelance writer and former Lowell resident, wrote an extended article in the April 27 issue of The New Yorker about the storied history of Lowell’s bells.

Like many undergraduates at Harvard, Batuman said she was not very interested in the bells during her time as a student.

“I just had no idea what was up with them other than that they were rung every Sunday,” she said. “I remember it being early in the morning, although now I realize it was at 1:00 in the afternoon.”

According to Batuman, the bells are a symbol of spirituality as well as political freedom in Russia.

“A lot of people were crying,” she said of the moment when the bells were returned to the Danilov Monastery. “They all feel like they are some part of their history that they were alienated from for a long time.”

Nonetheless, Harvard was at first reluctant to return the bells that had been as much a part of the school’s history.

“The house tradition isn’t actually depleted by the bells going back; it’s enriched,” said Batuman. “These bells have even more of a weird story than the previous ones did.”