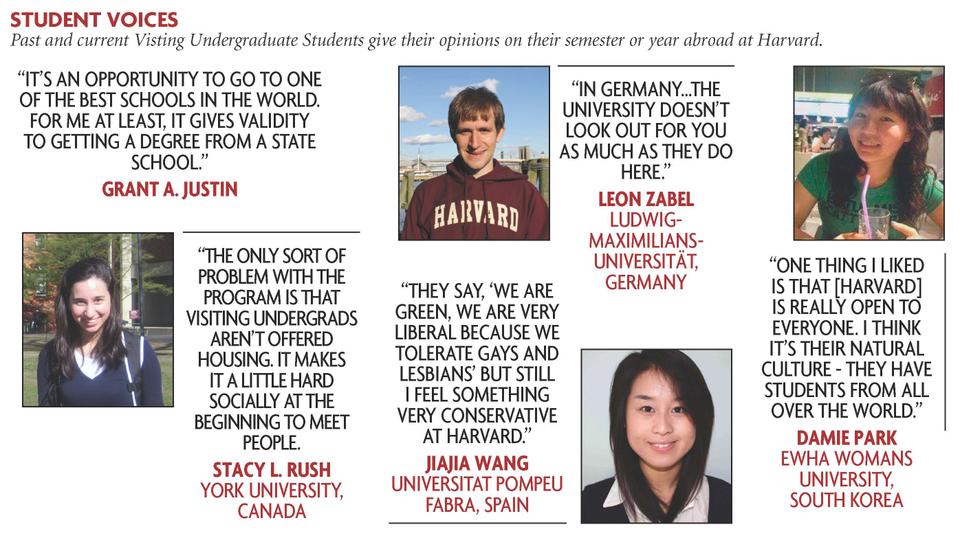 Stacy L. Rush had all the makings of a typical Harvard student. She enjoyed taking biology courses and spending time at Harvard Hillel. She had even founded an officially recognized student organization. Yet when she e-mailed Organismic and Evolutionary Biology Lecturer Andrew Berry with a question about her coursework, he was perplexed.

Upon receiving the student’s e-mail, Berry looked her up on Harvard College Facebook and was surprised to find she was unlisted.

“Who are you?” he asked, bewildered, when she walked into class the next day. Laughing, Rush explained that she was a Visiting Undergraduate Student.

Rush and her fellow VUS (pronounced “vuzz” by those in the know) come to Harvard from universities around the world to study for a semester or a year. Though the VUS become involved in most aspects of Harvard life, the existence of this program remains unknown to many at the University and nearly unadvertised outside of Harvard.

The Visiting Undergraduate Student Program allows undergraduates from any university in the world to apply to attend Harvard for one or two semesters.

Many of those who participate in this program are international students. Others come from small liberal arts schools in the U.S., and a few come from Harvard’s peer institutions—last year, one visiting student hailed from Princeton and another from Brown.

The students list a variety of reasons for coming to Harvard, but most center on academics. According to Sarah R. Cole, a lecturer on History and Literature who serves as the advising coordinator for the VUS Program, most of the international students major in economics in their home countries and hope to gain an American perspective on the field. The domestic students, she said, tend to be math or science concentrators who feel they have exhausted the course offerings in their subjects at their colleges.

Jiajia Wang, who came from Universitat Pompeu Fabra in Barcelona, Spain to participate in the VUS Program in 2009, said that she was planning to apply to graduate programs in economics in the U.S. and wanted a preview of the American educational system.

Damie Park said she thought that Harvard would offer her more opportunities in her field of study—Women, Gender, and Sexuality—than Ewha Womans University in Korea where she was an undergraduate. Hoping to transfer to Harvard in 2008, she learned that transfer admissions had been suspended—Harvard did not accept any transfer students in 2008 and 2009—but that she could spend a year at Harvard as a VUS.

For Grant A. Justin, the VUS Program offered him “a second chance,” he said. A self-described “terrible student in high school,” he cleaned up his grades while attending the University of Oregon for a year and Montana State University for two years. Adding a year at Harvard to his resume before his final year at MSU, he said, “definitely looks good.”

The application process for visiting students is similar to the regular admissions process, but it differs in several significant ways. First, VUS can enter Harvard in either the fall or spring semesters, so applications are evaluated twice each year.

Rather than focusing on personal characteristics or experiences, the essay portion of the application asks them to “Be as specific as you can regarding your academic interests and the curriculum you expect to follow.”

And though they do have the opportunity to indulge in shopping week once they arrive on campus, prospective VUS must list in their applications the four courses that they might enroll in during their first term at Harvard.

The number of VUS applications and the admissions rate for the program contrast starkly with the Harvard admissions norm. Whereas 614 students applied for transfer admission and over 30,000 sought regular admission in fall 2010, just 47 applied for the VUS Program. Of those applicants, 32 were admitted, and 30 decided to attend—21 are here for just the fall semester, and 9 will stay for the full year.

“Maybe half of the people I talk to [at Harvard] have never heard of it,” Justin said. “I think if it was well known a lot of people would apply.”

HARVARD THROUGH THEIR EYES

As visitors to Harvard from varied backgrounds, VUS have unique perspectives on life at Harvard.

Coming from York University, a “commuter school” in Ontario, Canada, Rush said that “Harvard has a lot of school spirit.”

Leon Zabel, who is spending the current semester as a VUS, said that at his school in Germany, Ludwig-Maximilians-Universität, “social life is not centered at the university. We don’t have a campus at all, just some buildings right in the city.”

Wang expressed a similar sentiment, saying that Harvard has “a lot of student life that we don’t have so much in Spain. We just go to classes, lectures. We may have some student organizations, but people are not so active—and not, I would say, so power-hungry, wanting to be president.”

“I was mystified a little bit at Harvard,” Wang added. “I thought the people would be so amazing and myself would be so, so small. I arrived there and I actually felt, yes, these people are so hardworking—and so lost. They have to go to therapy...this is not normal. We should be competitive, but in a sane way.”

Some VUS also pointed out academic differences between their home universities and Harvard. Park said that in Korea her classes were mainly large lectures with no opportunity for discussion; she enjoyed the chance to participate in sections at Harvard. Wang praised the lower requirements towards earning a degree in the U.S., saying she was surprised that an American undergraduate could complete a concentration by taking around 12 courses in a field.

The VUS have become involved in a wide variety of extracurricular activities during their time at Harvard, ranging from Model United Nations to the Harvard-Radcliffe Chorus to the Harvard Financial Analysts Club. Justin is currently working in a biology lab and Zabel is rowing with the freshman crew team, although he’ll be back in Germany by the time they have their first competitive meet in the spring. Park, who spent a spring semester and then a fall semester at Harvard, participated in the Harvard-Radcliffe Women’s Leadership Project’s annual conference during the summer break. Rush even left her mark on Harvard by co-founding the Quidditch team.

Despite their immersion in most academic and extracurricular facets of Harvard, VUS are not included in one important area of undergraduate life: the House system.

On-campus housing is not offered to any of the VUS. Cole explained that, “There hasn’t been room to house all the VUS in Harvard housing, so as a matter of fairness we ask them all to live off campus.”

She acknowledged that this is a source of frustration to most VUS. “Their one wish is that there could be on-campus housing, because that’s such an important Harvard experience,” she said.

Aside from Justin (who said he meets Harvard students through his brother, a current Harvard sophomore), all of the VUS interviewed for this story expressed a strong desire to have the social experience of living in a House.

Another concern for some VUS is the cost of the program. Visiting students are not offered financial aid and thus must pay the full rate of $17,488 per semester to take four courses, in addition to the cost of off-campus housing.

Most students said that their semester or year at Harvard carried a far heftier price tag than their home universities. Zabel pays 500 euros (about $700) per semester, which he said is the maximum that a public university can charge students in Germany. In Montana, Justin spends just over $6,000 per year in tuition; he said he was “surprised” to learn that Harvard does not offer financial aid to visiting students, though he said he would not have applied for aid regardless.

“Frankly speaking, it adds like one more zero” to her usual tuition in Korea, Park said. “It was a little bit burdensome...personally, I think it was worth it. I learned a lot from that one year at Harvard.”

—Staff writer Julie M. Zauzmer can be reached at jzauzmer@college.harvard.