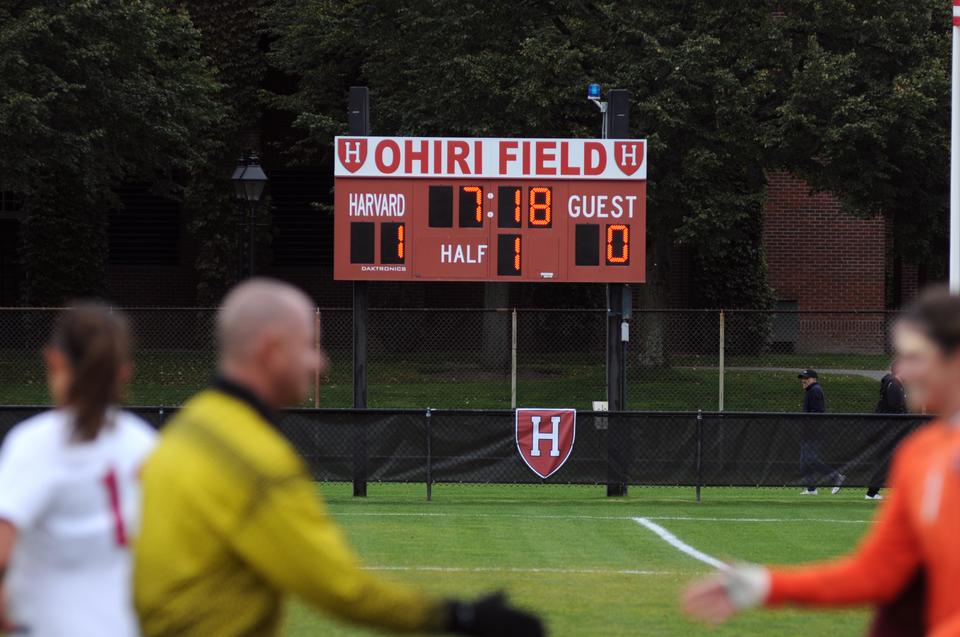 The namesake for the men’s and women’s soccer field is Chris Ohiri ’64, whose 47 goals are tied for best in the men’s record book. Ohiri came to Harvard after competing for the Nigerian national team in the 1960 Olympics. Shortly after his prolific career with the Crimson, Ohiri was striken with leukemia and died a political prisoner in his home country.
By E. Benjamin Samuels, Crimson Staff Writer

The story of Chris Ohiri ’64 reads more like a Greek tragedy than a regular Harvard student-athlete bio.

Born and raised in Nigeria, Ohiri came to Harvard as a former national champion decathlete and a member of the 1960 Olympic soccer team. In Cambridge, he ran track and continued playing “the beautiful game,” scoring 36 goals in nine games on the freshman team.

Despite injury, he led the Ivy League in scoring in his three varsity seasons, broke the Crimson’s all-time scoring record as a junior, and was a first-team All-American as a senior. In track, Ohiri set a number of records in the triple-jump.

With 47 goals in his career, Ohiri was the all-time Crimson leader until last November, and he now shares the distinction with Andre Akpan ’10. The two have scored 10 more goals than anyone else, though Ohiri reached 47 in one fewer season than the current MLS forward. The Nigerian standout is also second all-time in points, a function of goals and assists, even though assists weren’t calculated until after his career ended.

“I remember Al Gordon [’23], who was one of our all-time great alumni, visited him in Nigeria…[Gordon] said, ‘He looked to me like a black saint,’” says John P. Reardon Jr. ’60, the Executive Director of the Harvard Alumni Association.

But Ohiri’s fall came as rapidly as his ascent. He was diagnosed with terminal leukemia in 1966 as a student at Harvard Business School. He returned to Nigeria to die, but he was seen as a threat to the government in power and was promptly taken into military captivity.

He passed away in confinement.

“He was a pretty special guy, and you have to picture a time when we didn’t do much internationally,” Reardon says. “We didn’t have many kids coming like this. We also didn’t have many black kids in this place.”

According to Reardon—then Harvard’s Athletic Director—a number of the fields at the athletic complex underwent renovation in the early 1980s. With Gordon’s blessing, Reardon, who knew Ohiri as an undergraduate, and the rest of the athletic department decided to name the field in his honor. Ohiri Field was dedicated on Oct. 15, 1983. Today, both the men’s and women’s teams play there.

Seamus Malin ’62, Ohiri’s soccer teammate and Assistant Dean of Admissions in the early 80s, attended the ceremony, though he says that he was involved little in the naming of the field. He emphasizes how much the game had changed at Harvard between his days as a student and the naming of Ohiri Field.

“In the early 60s, the game was not very much a public high school game,” Malin says. “If you look at the roster from my freshman class in 1958, going back now 52 years, the roster of players was almost exclusively the prep school kids and a few foreign students.”

Malin was a senior when Ohiri first played on the varsity squad (at the time, freshman played on their own teams). Soccer’s exposure in America was minimal, so to play beyond the collegiate level, he comments, was uncommon.

“Oh no, that was very rare,” notes Malin of Ohiri’s play on the Olympic team. “He was a massive exception. I think that the only time I can remember Harvard athletes being involved with national programs was for rowers.”

“A lot of these guys played three sports,” adds Malin, referring to a number of students with whom he played. “They played lacrosse in the spring, and they played squash in the winter. [Soccer] was just another sport.”

Reardon agrees, and points out that Ohiri was an anomaly in the world of Harvard athletics in the early 1960s.

“He was not in the usual form of recruited athlete. But he arrived here, and he could kick a soccer ball like you can’t believe,” he says. “He scored a ton of goals, and you would not like to be on the other side of the ball coming at you.”

The Harvard Crimson wrote a feature about Ohiri on Oct. 18, 1961, early in his sophomore year. Three games into his varsity career, the title of the article reads, “Ohiri Leads Varsity, May Surpass Present Individual Soccer Records.” Bruce Monro, the coach at the time, said Ohiri was, “probably the greatest college soccer player in the U.S.”

Women’s soccer coach Ray Leone says that he does what he can to educate his team and honor Ohiri’s legacy.

“Our team kind of gives tribute to him and touches that rock [memorializing Ohiri] before we go onto the field when we play [home] games,” he says. “It started a few years ago to just give a quiet tribute to him and appreciate that we even have the opportunity to do what we do.”

But both Reardon and Malin agree that the community is generally unaware of the history of the field’s namesake. When he can, Malin says he tries to tell Ohiri’s story to the soccer teams.

“I don’t think really today people know much about Ohiri at all except that he’s a legendary player from the 60s,” Malin says. “But that’s understandable. To a lot of students today, it’s just another name.”

Reardon comments that keeping the community informed about the origins of facility and building names is a challenge.

“Time does things,” Reardon says. “You die, and no matter what you do, people forget you, unless somebody writes a book about you. I think alumni at that time knew a lot about [Ohiri], but I think over the years…people [have forgotten] about him.”