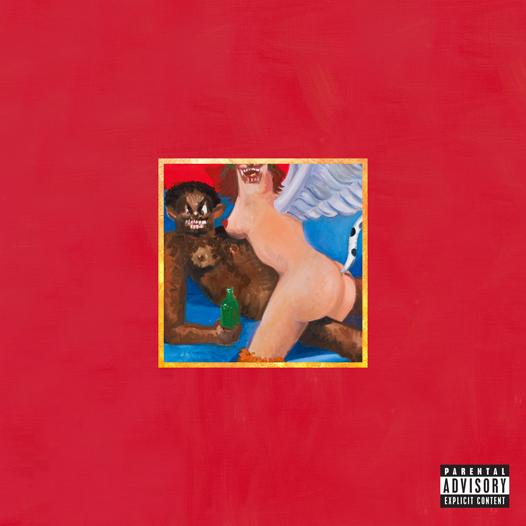 Kanye West has been accused of a lot of things, but moderation is not one of them. His first album, 2004’s “The College Dropout,” took popular music by storm. With “Slow Jamz” and “Through the Wire,” West launched a two-single assault on the charts, pushing himself to the forefront of popular music. It feels natural, then, that his latest opens with a bombastic fusion of grimy hip-hop verses and a soaring, cello-driven chorus—a promise of stubborn refusal to compromise that the following twelve tracks keep.

From the opener “Dark Fantasy” through the end of the album, “My Beautiful Dark Twisted Fantasy” gives the impression that West had to decide between seemingly diametrically opposed stylistic options. The album alternates between the gritty and the luxuriant, the raw hip-hop of “Monster” and the Auto-Tune laden restraint of “Runaway.” Where others might see boundaries and limitations West sees opportunity for constructive combination. “My Beautiful Dark Twisted Fantasy” proves that West—who completed this album while releasing additional new songs weekly via his blog and recording a collaborative album with Jay-Z due early next year—is one of the rare artists with the talent, tenacity, and sheer creative energy to turn unlikely fusion into persuasive triumph.

The no-holds-barred production and lyrical bravado of “My Beautiful Dark Twisted Fantasy” may seem almost impersonal to the listener unaware of West’s recent publicity mishaps, from his infamous interruption of Taylor Swift—which inspired the second single “Runaway”—to his recently resolved dispute with former President George W. Bush. However, seen in the context of these missteps, “My Beautiful Dark Twisted Fantasy” becomes a self-vindication that could never have succeeded were it not for the very same insatiable ambition and unflappable ego that brought about the decline of his public image. The beat to the album’s first single, “Power,” blends a hard-edged King Crimson sample with an anthemic vocal melody taken from Continent Number 6’s “Afromerica.” West raps, “At the end of the day, goddamnit I’m killing this shit / I know damn well y’all feeling this shit,” and, no matter what you think of Kanye West, it’s hard to disagree.

It seems impossible to understand either West or his latest album without some understanding of his consistently embattled psyche. His sense of being constantly besieged by an undefined outside force was evident from the very first words spoken on his first solo single, “Through the Wire”—“They can’t stop me from rapping, can they?”—and this paranoia has never been more central to his music. On “Gorgeous,” which matches a despairing, darkly melodic chorus from KiD CuDi with a driving, distorted electric guitar loop and Kanye’s fiercest lyrics yet, this feeling of constant struggle motivates the album’s standout punch line: “The same people that tried to blackball me / Forgot about two things: my black balls.”

Fans of “The College Dropout” and “Late Registration” may miss the easygoing, backpack-rap sensibility of “Family Business” or the carefree exuberance of “Touch the Sky.” Even “All of the Lights,” with its layered orchestration and all-star cast—Elton John plays piano beneath Alicia Keys’s buried vocals—can’t quite match the laid-back feel of these tracks. However, West introduces as many moods as he discards. He left off the album “Good Friday,” a celebratory piece recalling the mood of his earliest work, choosing to offer it for free download via his blog. With “So Appalled,” he taps into an unprecedented DJ Premier-tinged, heavily orchestrated sweep, and with “Blame Game” he reaches heights of tragic introspection barely suggested by his previous work.

In the careful cultivation of his album’s emotional palette West stands unmatched as a hip-hop auteur, alone in his ability to craft a rap album with a sweeping narrative arc that plots his own rapid rise and ensuing disorientation. His move from the triumph of “All of the Lights” to the admonition to “Run from the lights / Run for your life” of “Lost in the World” builds a narrative at once intensely personal and profoundly relatable. Its cohesion not only validates West’s creative vision but also suggests that the self-conscious, surprisingly grounded West of “The College Dropout” may be more repressed and disguised than altogether absent.

Since his move from super-producer to rap star, West has overseen major changes to mainstream hip-hop. He pioneered the use of soul samples with his production of Jay-Z’s “The Blueprint” and pushed Auto-Tune to the height of its popularity with his own “808s & Heartbreak.” But one thing hasn’t changed: behind the music is a man who will realize his goals by any means necessary, whether through lush production or grimy rapping, through mid-1990s production techniques or alternative rock instrumentation. Even now, a tumultuous decade into his career, Kanye West is a man who will see his fantasy made reality.