Cast of ‘The Wire’ Spotlights Poverty 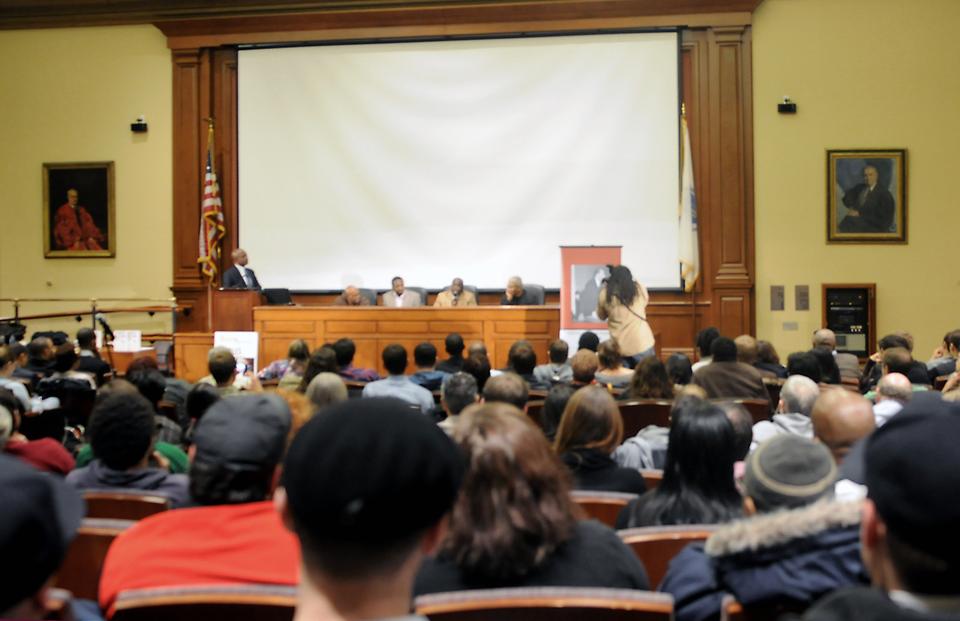 A packed room listens to cast members from The Wire talk about their experiences filming the acclaimed HBO series. The event was co-sponsored by the IOP and was moderated by Harvard Law School Professor Charles Ogletree, who will be teaching a class focused on The Wire next semester.
By Matthew M. Beck, Contributing Writer

As a slide show of African-American history rolled in the background, images of slavery, beatings, and homelessness enhanced a vocal performance by Larry Watson about continuing social injustice last night in Ames Courtroom at Harvard Law School.

The course, Race and Justice: The Wire, will analyze the causes of urban poverty and how effective city governments and police departments have been in combating it.

Professor William Julius Wilson, who teaches an African and African American Studies course on The Wire for undergraduates, said he chose to analyze the show because it “integrates the range of topics necessary for a thorough understanding of urban inequality.”

Most of the discussion last night centered on the show, which premiered on HBO in 2002 and explored different facets of social strife in Baltimore, Maryland.

Andrews, the real life inspiration for a character who robs gang members, said that the series actually downplayed the constant struggles he faced. “What you see on ‘The Wire,’ you add that up three-fold,” Andrews said. “What you see is watered down.”

Audience member Setareh J. Yelle, a student at Simmons College, said that she appreciated the show’s realism. “I think that realism wouldn’t be possible without a cast that truly understands the issues that are affecting the city,” she said.

Ogletree said he hoped the course would provide a “rich and nourishing exercise to see what effect ‘The Wire’ has had on our communities.”