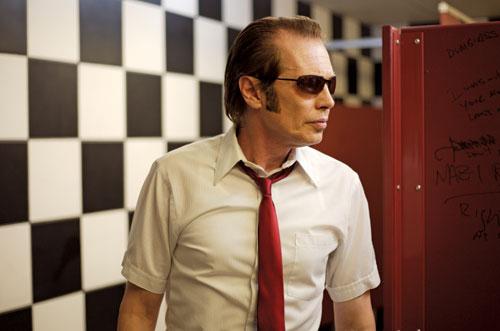 What are the similarities between Dante Alighieri and Steve Buscemi? First time writer and director Hue Rhodes may be the only one. Loosely based on Dante’s “Inferno,” “Saint John of Las Vegas” follows a reformed gambler’s trip to his own personal “hell” as he is led on his first investigation of insurance fraud. However, though the performances are uniformly strong, only viewers who are already deeply familiar with Dante’s poem will be able to understand how the film functions as an adaptation, which is unfortunately a critical element in appreciating the movie as a whole.

Steve Buscemi plays John Alighieri, a quirky and uncomfortable man fighting a gambling addiction and moving up through the ranks of a mundane insurance agency. When he finally works up the courage to ask his boss (Peter Dinklage) for a raise, he instead offers him a shot at investigating the potential fraud of a stripper named Tasty Delight (Emmanuelle Chriqui).

Dispatched to guide John on his first mission is Virgil (Romany Malco), an A-list fraud buster who takes his job very seriously. The two embark on a trip to Las Vegas, John’s own personal Hades, with its endless gambling temptations.

Now, if you’ve recently spent a few high school or college classes with you nose forcibly buried in the “Inferno,” then maybe, just maybe, you will pick up on the subtle allusions to the work of Dante.

The only real hints given are Virgil’s name, as well as John’s; he shares a last name with Dante. Without the knowledge of that framework, Rhode’s interpretation will seem like an arbitrary compilation of stories loosely pasted together under the pretense of a road trip gone horribly wrong.

Though the film overall feels choppy and nonsensical, there is certainly entertainment value to be found in the characters and their misadventures. Steve Buscemi delivers yet another excellent performance, imbuing John with a quirky yet weary demeanor. Romany Malco, known for his role in “The 40 Year Old Virgin,” makes Virgil perfectly indignant and mysterious, mocking John more than helping him. The two have excellent on-screen chemistry, and convincingly play off each other with sarcastic wit.

Sarah Silverman stars as John’s coworker Jill, with whom he becomes involved with after an office quickie. Her character can best be described as psychotic, with a fetish for smiley faces and the color yellow. But Silverman is not her usual offensive self, at least not in an obvious way, which is actually very refreshing. It’s nice to know that she can actually act, and not just affront people with a straight face.

The brief performances of the many people John and Virgil encounter are certainly memorable as well. Perhaps the best is delivered by a masked John Cho, who spends his exchange with John engulfed in flames. Likewise, Peter Dinklage’s portrayal of a typical nobody who thinks he’s a big shot gives his character the same kind of sass he displayed as Miles Finch, the “South Pole elf,”in “Elf.”

Rhodes lucked out with his selection of actors, because their performances are the only thing that gives the film any merit. The overarching message of the film is actually incomprehensible unless the viewer has the critical prior knowledge that the film is based on Dante’s “Inferno.”

Aside from that somewhat unfair assumption, it’s also clear that the first-time director and writer tried a little too hard with his adaptation of a staple of classic literature. He throws in random voiceovers that attempt to be insightful, but instead prove to be more distracting than helpful. There are also frequent flashes of clips that come without warning and are at first hard to decipher—are they dream sequences, flashbacks, or glimpses of things to come?

“Saint John of Las Vegas” is a classic case of great characters thrown into a second-rate plot. For amusing but plotless performances, see the film. But for a story that actually makes sense, stick with the poem.