HBS graduate explains decisions during tenure as Secretary of the Treasury 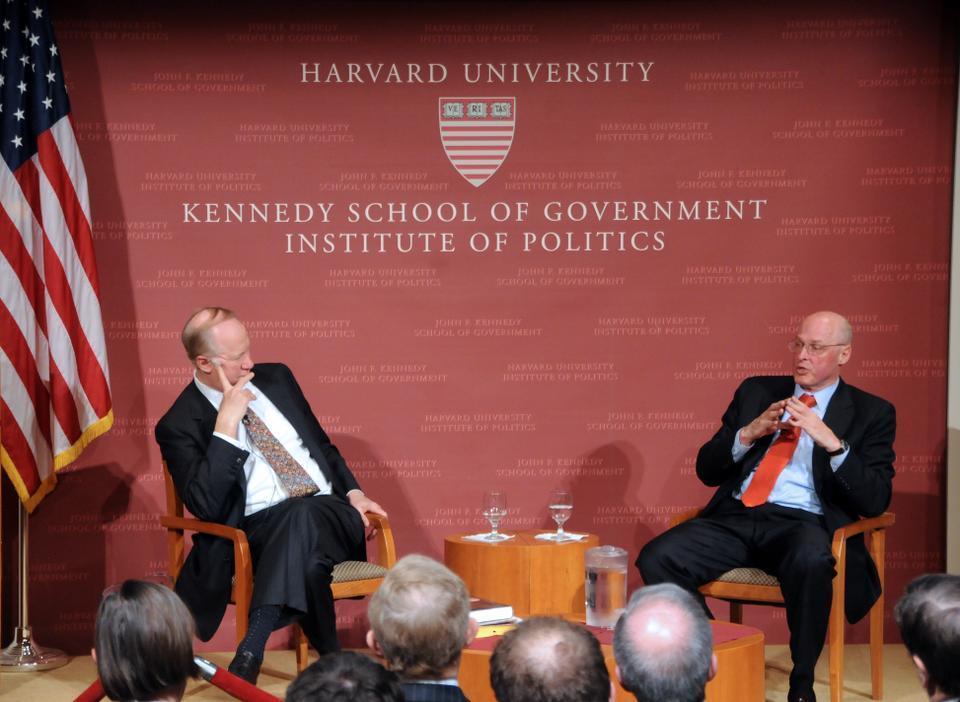 Former Secretary of the Treasury Henry M. Paulson, Jr. managed to maintain a sense of humor while speaking at the Institute of Politics yesterday about the recent financial crisis and his personal experience with decision making in the difficult environment.

Last night’s event was sponsored by the Center for Public Leadership and the Mossavar-Rahmani Center for Business & Government and moderated by Kennedy School professor David R. Gergen before a full audience.

Paulson—who graduated from Harvard Business School in 1970—said that when he first assumed his post as Secretray of the Treasury, he recognized problems building up in the financial system and that the United States was “overdue” for a financial crisis.

“I don’t know what will cause the crisis, but after the fact it will be painfully obvious,” he had told the former President George W. Bush.

Dealing with the financial crisis was “an all out race to stave off disaster,” Paulson said last night. He added that he never let himself think about the possibility that the financial system would fail, although it was “on the brink” at times.

Paulson also said that he was able to pick up on potential problems that might not have affected constituents for another four or six weeks, but that Congress was often hesitant to address issues without immediate implications.

“It’s very difficult to get Congress to act on anything that is big and complex and controversial if there is not an immediate crisis,” he said.

“What is the best way to get action in Washington before things build up the way they did?” Gergen asked.

In his conversation with Gergen, Paulson said that in the months preceding the economic crisis that dominated 2007, the most important action he took was to work on building relationships with the President and with Congress. He also stressed the importance of fast decision making with incomplete information once the actual financial downturn hit.

“In a number of instances, we were forced to make decisions very quickly, and we knew that sometimes they would have unattractive consequences,” he said, adding that such decisions had to be modified as events unfolded.

The event ended with questions from the audience.

Kennedy School student Sebastian M. Litta asked whether Paulson thought that the greed of both bankers and ordinary people would eventually go away or whether greed would cause another financial crisis.

Paulson responded that while editing his memoir—“On the Brink: Inside the Race to Stop the Collapse of the Global Financial System”—he had changed the word “greed” to “profit motive.” According to Paulson, this desire for profit would not dissipate, which is why regulatory systems are necessary.

Several undergraduates in attendance said they enjoyed the event overall.

“It’s great to get a first-hand perspective because he was in the center of this [economic crisis],” Claudio X. Gonzalez ’13 said.

But Alexandru Chivescu ’13 said that he wished Paulson would have discussed more explanation for some of Paulson’s decisions.

“It was pretty general, which was okay, given the nature of the venue,” Chivescu said. “[But] I definitely wanted to know more about the decision he made concerning Lehman Brothers.”