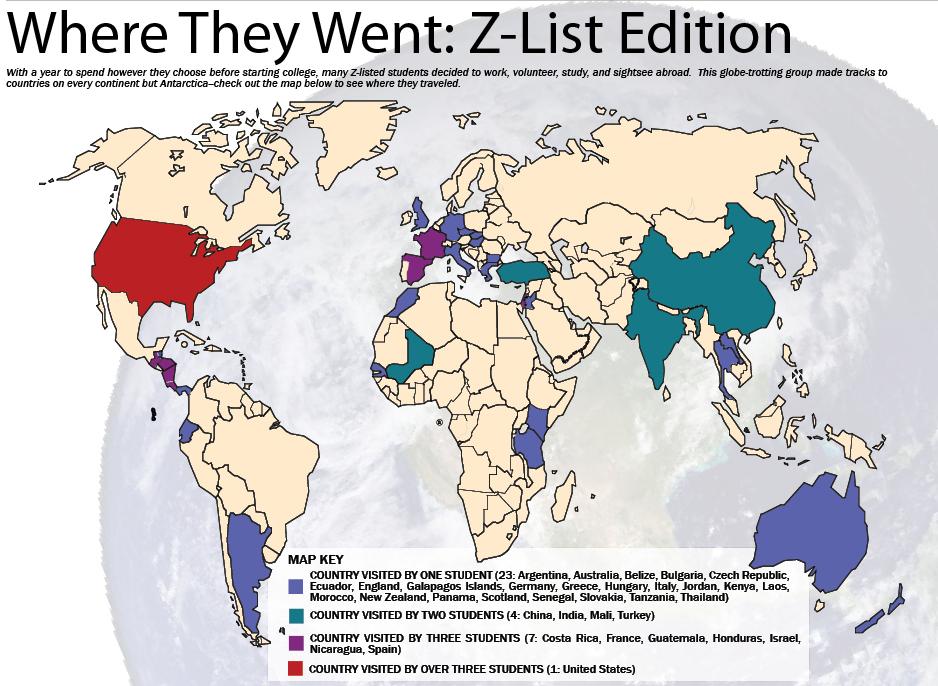 Jason S. Wien ’13 was visiting Northwestern University, the school he had committed to attending, when he got the call.

Katie N. Rice ’14 had already attended her freshman orientation program at the University of Arizona, and Emily M. Orlins ’11 had learned the name of her roommate at Cornell University.

These students’ college plans were set—until they got a call from Harvard.

We don’t have room for you in the freshman class entering this fall, Harvard told them. But if you’re willing to wait a year, you’re invited to attend.

‘A’ STUDENT TO Z-LIST

Each year, Harvard offers admission to a select group of students—known among admissions officers as the “Z-list”—on the condition that they take a mandatory year off before enrolling in the College.

Dean of Admissions and Financial Aid William R. Fitzsimmons ’67 says that of the 60 to 100 students in each class who take a gap year before coming to Harvard, roughly half do so voluntarily. The other half were Z-listed.

Fitzsimmons says that although the practice of Z-listing dates back to the early 1970s, the number of Z-listed students has increased over the years. In 2002, Director of Admissions Marlyn E. McGrath ’70-’73 told The Crimson that there were 20 Z-listed students in each class. Today, that number has reached 30 to 50.

The term Z-list was coined by the office’s computer technicians due to the fact that these students are the final group to be admitted each year. After regular decisions and waitlist admissions have been made, Fitzsimmons says there are always more students the admissions office would like to accept. These students are offered a spot on the Z-list.

“We are 100 percent sure that we want them here next year, not 99 percent,” Fitzsimmons says of the Z-listed students. “We never quite know what next year’s applicant pool is going to bring.”

Samuel B. Novey ’11 says that when he got a call telling him he’d been Z-listed, “[the admissions officer] made it sound like I was trying to book a hotel. She literally said, ‘Next year we may have a bed available.’”

But Fitzsimmions admits that many find this system illogical, since the 30 to 50 beds that would be needed to house Z-listers in the entering class are the same beds being filled by last year’s Z-listers.

“We all know that this is a zero-sum game,” Fitzsimmons says.

Given a year to spend in nearly any way they choose—apart from enrolling at another academic institution for credit—this group of students comes to Harvard with a wide variety of experiences under their belts.

Some worked—in a company that makes video games, in a rock climbing gym, on a UPS delivery truck, in a neuroscience lab full of monkeys, and on Capitol Hill, to name a few jobs. Some volunteered for charities aiding refugees, cancer patients, and citizens of impoverished nations. Many of them traveled. Collectively, the students interviewed for this article visited 35 countries, spanning every continent but Antarctica.

William N. Forster ’13 says that the sauteed grub intestines that he ate in a remote Ecuadorean  village during his gap year tasted “better than the armadillo.”

Nearly all of the students say that their gap years were extremely rewarding and that they would recommend the experience to other incoming college students.

Johnny F. Bowman ’11 says he was “pissed off” when he first learned he had been Z-listed.

But he says that that feeling changed once he saw the possibilities afforded by an extra year between high school and college.

“Once I realized I can do whatever I want to do, it was the most mind-opening realization and subsequent experience of my life,” Bowman says.

Many students say that taking a gap year gave them a chance to unwind after working assiduously throughout high school, and that spending a year away from academics changed their perspective on college.

“Every day I say ‘Yes! I’m at college! More college today!’” says Novey, who worked on a congressional campaign during his gap year and then became a congressional staffer when his candidate won the election. “You could go weeks without seeing a girl your age in D.C. It teaches you to appreciate that you have a built-in social scene.”

Others say their year off allowed them to discover academic interests that they didn’t know they had.

For example, Quentin Z. Auerbach ’11 says that the culinary interest which he developed by taking cooking classes during his gap year led him to choose food policy as the topic of his social studies thesis.

Asher M. Lipson ’12 had never studied French before traveling to France during his year off. Now, he’s concentrating in Romance Languages and Literatures, a decision he says he doubts he would have made otherwise.

While Z-listed students bring a wide range of interests and experiences to Harvard, many people charge that they are similar in two ways—the Z-list has long had a reputation for consisting predominantly of affluent students and Harvard legacies.

Of the 28 students interviewed by The Crimson for this story, 18 have parents who attended Harvard. All but four receive no financial aid from the College, while about 70 percent of the student body receives aid from Harvard.

John W. Anderson, co-director of college counseling at the elite boarding school Phillips Academy in Andover, said that of the Andover students who are Z-listed, “a very, very, very high percent” are legacies.

According to Fitzsimmons, Harvard does not aim to use the Z-list to admit legacy students. Instead, he says, the Z-list contains a greater proportion of legacies than the class in general since legacy students might be more willing to accept a spot on the Z-list.

However, Fitzsimmons says the yield for the Z-list is about 67 to 70 percent—not much lower than the 76 percent overall yield that the College reported for the Class of 2013.

Fitzsimmons says that Z-list admissions, like all admissions decisions, are need-blind. However, he says that the cost of funding a year off from school has deterred some students from accepting a Z-list spot.

“Harvard should take into account the students who they’re asking to take a year off and make sure that their families are able to do it,” says a student who wished to remain anonymous, since she says that the Z-list “gives off an impression that is radically different from who I am.”

She receives a full scholarship from Harvard, and she says that it was difficult for her mother to have her living at home a year longer than expected.

Maturity is also frequently cited as a potential rationale behind Z-listing. But according to Fitzsimmons, the College simply views Z-listed students as “good candidates” that it would like to enroll.

“Very rarely do we say to ourselves, maturity is an issue,” Fitzsimmons says.

While some schools such as Middlebury College and the University of Southern California admit students on the condition that they enroll in the spring semester, when beds have been vacated by those who study abroad in the spring or graduate a semester early, Harvard’s practice of requiring students to defer for a year may be unique.

“Harvard can sit back and say, ‘We can do this because we’re Harvard.’” says Stuart Clutterbuck, a guidance counselor at Bergen County Academies, a top magnet high school in New Jersey. He speculates that high school students would be unlikely to accept a one-year deferral at a less prestigious institution.

Despite the secrecy and stigma that some students say accompany being Z-listed, most say they are glad for the opportunity to take a year off before coming to Harvard.

“I’m grateful that I was on the Z-list,” says Madeline S. Peskoe ’14, who has spent this year in Senegal and Argentina and will enter Harvard in the fall. “There’s no way that I would have done this on my own. It was the extra kick that I needed to get off the track. Thanks, Harvard.”