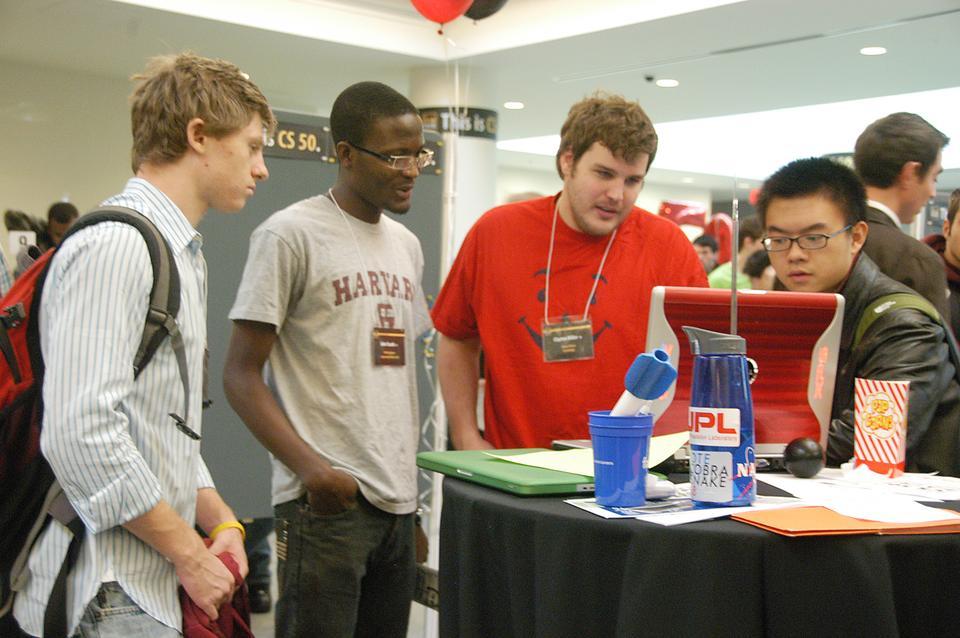 CS50 students, pictured above during the CS50 project fair last semester, will soon be allowed the alternative of taking the course SAT/UNSAT.
By Monica M. Dodge, Contributing Writer

To increase the appeal of the already popular Computer Science 50, Harvard’s introduction to computer science, course instructor David J. Malan ’99 announced yesterday that starting next fall, some students will be graded on a satisfactory/unsatisfactory basis.

Students who wish to satisfy General Education requirements with the course—9 percent of last semester’s class—will be able to receive letter grades per General Education policy. CS50 will continue to be offered with letter-graded status for departments that expect the course as a letter-graded concentration requirement or for students who prefer to receive a letter grade, according to Malan.

Malan, who first started teaching CS50 in the fall of 2007, said that he had long considered eliminating letter grades to encourage more students without previous programming experience to take the course.

Given the course’s reputation for time-consuming problem sets, Malan said he often worries that interested students may shy away from taking the course, though 72 percent of students who took CS50 last semester said they had no programming experience.

“Some students, myself once included, absolutely hesitate to turn the page to some chapter unfamiliar to them out of fear of ‘failure’ or some dark mark on their transcript,” Malan wrote in an e-mail. “With this change to sat/unsat, CS50 hopes to free students to explore a world beyond their own comfort zone.”

Citing the success of similar grading systems at Harvard Law School and at MIT—where freshmen do not receive letter grades their first semester—Malan said that CS50 students would be able to focus more on the material rather than the grade itself.

“By nature of letter grades, we end up drawing lines (between A and A-, A- and B+, B+ and B, et al.) between values that sometimes differ by .02 percent, and the world proceeds to give those lines far too much weight,” Malan wrote in an e-mail to the CS50 teaching staff sent yesterday.

Head teaching fellow Ayse Cansu Aydede ’11 added that she believed this change will allow students to respond better to the qualitative feedback they receive, as they will not be distracted with points lost in problem sets and quizzes.

Some students expressed concerns about the change in grading policy, arguing that the amount of effort put towards the course would not be accurately reflected in the satisfactory grade.

“If I’m going to put all that effort, I want the grade to sit on my transcript,” Mariana H. Anton ’10 said. “I don’t want a satisfactory—if I put in the work for an A.”

An earlier version of the Apr. 16 news article "Malan Plans to Cut Letter Grades for CS50" incorrectly stated that starting next fall, all students will be graded on a satisfactory/unsatisfactory basis in Computer Science 50. In fact, some students will be allowed to take the course for a letter grade.

The article also stated that students who wish to satisfy General Education requirements with the course will be able to receive letter grades per General Education policy. To clarify, in addition, CS50 will continue to be offered with letter-graded status for departments that expect the course as a letter-graded concentration requirement or for students who prefer to receive a letter grade, according to course instructor David J. Malan ’99.