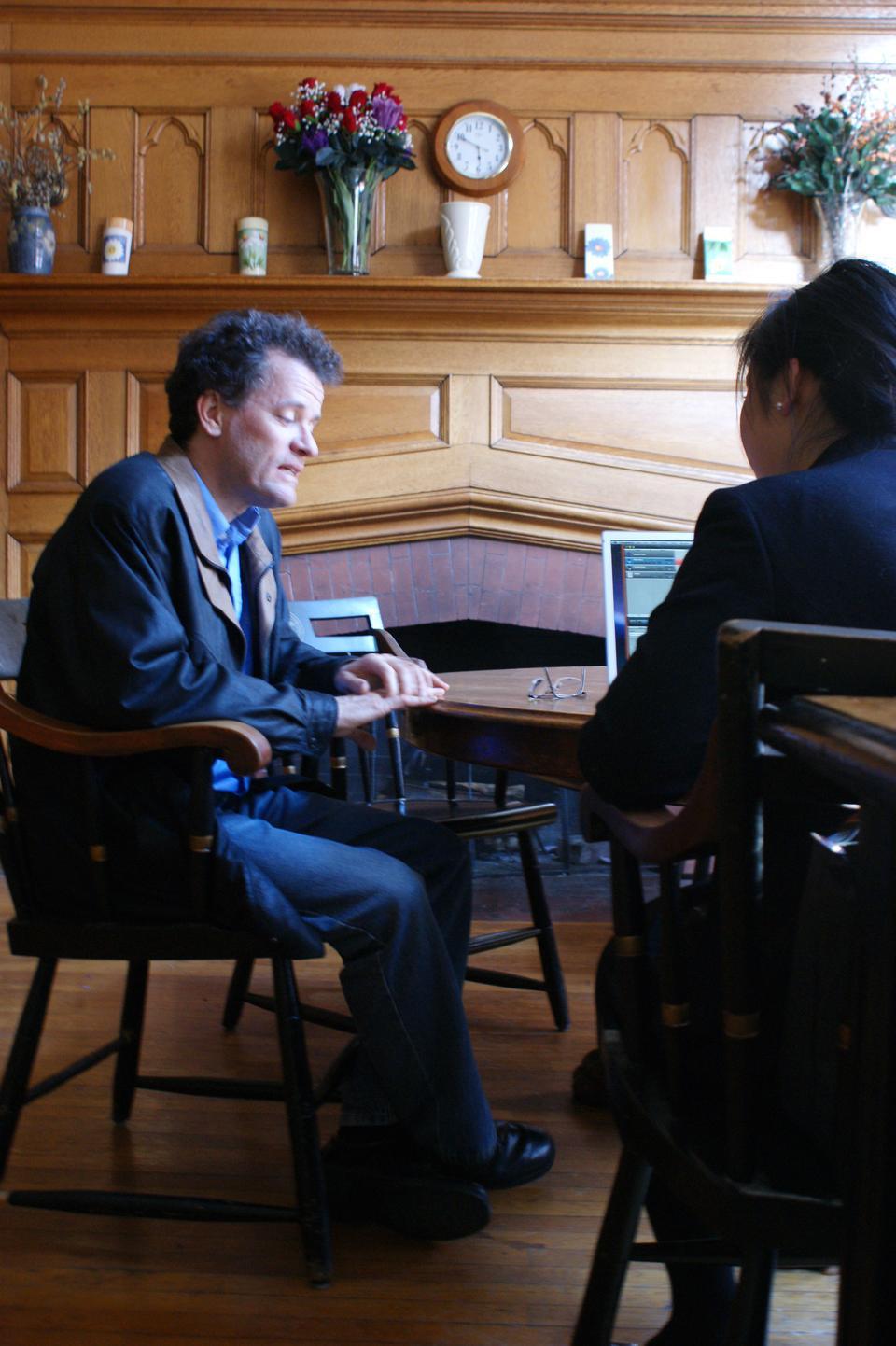 Yann Martel, the author of the award-winning novel "The Life of Pi", talks to FM during his tour to introduce his new book, "Beatrice and Virgil."
Advertisement
Advertisement

FM sits down with the "Life of Pi" author.
By Anna M. Yeung

How are a shipwreck, a tiger, and God connected? All play a major part in Yann Martel’s Booker Prize winning novel, “Life of Pi.” Nearly nine years after the publication of his runaway success, Martel sits down with FM on a sunny afternoon at the First Unitarian Church in Harvard Square to discuss his new book, his résumé, President Obama, and religion.

1. Fifteen Minutes: Are you tired of people asking you shipwreck-related questions yet?

Yann Martel: I toured for “Life of Pi” for two years, so I did end up talking a lot about animals and shipwrecks and religion and multiple faiths. After two years I had enough, but it was still interesting talking to readers.

2. FM: Many of your works have parts set in Canada. Is this a promotional attempt to get us all to move up north?

YM: No, I’m just Canadian. Usually American novelists set their stories where they live, so I’m Canadian. I’ve lived abroad a lot, I’ve traveled a lot, but I’ve only ever had a Canadian passport.

3. FM: In a recent project, you attempt to send Canadian Prime Minister Stephen Harper one book every two weeks as bedside reading. What prompted you to do this?

YM: I sensed this great disconnect between the political class and the artistic class, a lack of interest, a lack of involvement, which struck me as tragic because we’re not economic animals—we’re ultimately cultural animals. We are who we are, the language we speak, the notions we entertain, all of these are cultural, the things we do artistically, the things we take in. So to have a class that was so disconnected culturally struck me as very dangerous. I thought: what can I do as a citizen, a citizen of the arts? I decided, well, I’d send him a book every two weeks.

4. FM: And how long do you intend on doing this for?

Also, it’s funny. I’ve written to Harper for three years now, not a single reply from him, whereas I’ve got a hand-written note from Barack Obama about a month and a half ago because he read “Life of Pi” with his daughter and he liked it.

5. FM: Do you intend on starting this project with President Obama?

YM: No, because he reads. In fact, it’s stark, it’s amazing, the difference between him and Stephen Harper. He’s listed books that he’s loved, and you can tell this man is a dreamer, he has vision. So not only does he deliver wonderful speeches, he has a sense of oratory, which is important. You have to inspire people as a leader.

But I think he also has empathy, I think that’s probably in part, obviously nourished by his own personal experience, but also I think it’s been nourished by the books he’s read.

6. FM: Is there a particular book you wish people would send to you?

YM: Well, my next book features chimpanzees, so I need books on chimpanzees.

7. FM: “Life of Pi” featured a tiger, an orangutan, a hyena, and a zebra. Your upcoming book “Beatrice & Virgil” features a monkey and a donkey. Let’s get real here—do you really want to write or do you just want to open up your own menagerie?

YM: I like using animals because I find that they help me tell my stories. We’re very cynical about our own species, we’re less cynical about wild animals. I noticed that with “Life of Pi” that people were taken in by the animals. It’s strange, I don’t know why, but in adult fiction, there aren’t very many animals. We seem to confine animals to the world of children’s literature. Their symbolic potential to me is infinite. An animal can be exactly what it is, so in “Life of Pi,” it could just be a tiger in a lifeboat, nothing else, but it can also be many, many other things. There’s a symbolic wealth to animals that sometimes in some ways is lacking in human beings.

YM: As a child, one of the countries I lived in was Costa Rica and we had this little enclosed garden and there we had lots of pets. We had rabbits, we had a tortoise, and we had a monkey.

9. FM: The title [“Beatrice & Virgil”] is an obvious reference to Dante’s “Divine Comedy.” What aspects of the poem inspired your new novel?

YM: In the “Divine Comedy,” they are the ones who guide Dante through the whole journey. In other words, through Inferno, Purgatory, and Paradiso. In this novel, Beatrice and Virgil are the reader’s guides through hell. When dealing with things as momentous as the Holocaust, or any other historical event, you need a guide.

10. FM: Can you summarize your purpose for writing “Beatrice & Virgil” in 15 words or less for us?

YM: I wanted to represent the Holocaust differently.

11. FM: The narrator of the book, Henry L’Hôte, gives up writing after a successful first novel. Is Henry’s story a roman à clef for your own experiences?

12. FM: Are you ever scared that you will only ever be remembered as the author of “Life of Pi”?

13. FM: Henry attempts to take on a serious topic in his next work—the Holocaust. Like Henry, you are not Jewish, so what compelled you to write about the topic?

YM: Because beyond being a Jewish drama to me, it’s a human drama, and its import goes beyond that of just Jewish history. The Nazis’ view that Jews anywhere in the world were a disease, that was unique, but what led to it wasn’t. Acts of hate, thoughts of hate, racism, intolerance, bigotry, those are still very much universal. So I wanted to tackle the subject because I think it is still universal, it is not just this lofty historical tragedy that just sits up there in some pantheon of great tragedies. There are things holocaustal that happen everyday.

14. FM: Do you consider yourself religious?

YM: I would say yes, in the broadest sense of the term, in the sense that I choose to believe that all this isn’t just the result of happenstance and chemistry. I find faith is a wonderful respite from being reasonable. We’re so trained in the West to be reasonable. It’s yielded great things—it’s resulted in these great technical prolepses that are very impressive, but they in and of themselves don’t give us a reason to live. In the modern Western technological society, it’s very hard to have any kind of faith. And so I took on religious faith and I finally came to agree with what I was discussing in the book. Religious faith makes life interesting.

15. FM: Your résumé covers an impressive array of fields, from being a tree planter to being a security guard. Besides writing, which one of your other careers could you imagine yourself doing for the rest of your life?

YM: [laughs] God, it’s very generous saying it was impressive. I thought at one point I wanted to go into politics, but I don’t have any art for that. I might have been a teacher. I had good teachers when I was a kid...in a sense, a great teacher does what a great novel does. It gives you a sense of wonder, and you come out of it both entertained—a great teacher makes learning fun—but you also come better because you know more. Hopefully not just in terms of facts, but also in terms of wisdom.