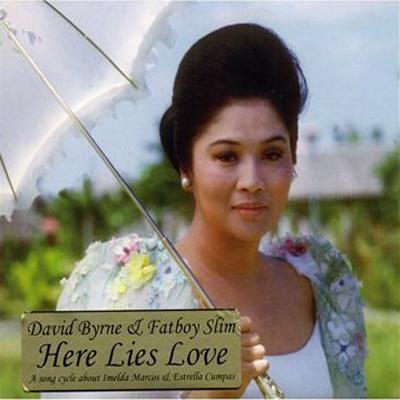 Listening to “Here Lies Love” means first coming to terms with the bizarre reality of this album: David Byrne, Fatboy Slim, and a host of guest singers narrating the rise and fall of Imelda Marcos, First Lady of the Philippines from 1965 to 1986. It’s an alt-rock opera about a woman most well known for the appalling excess of her collection of 3,000 designer shoes. As if that weren’t bewildering enough, it fails to cover the most well-known events of its subject’s life; Byrne, the album’s storyteller, omits Marcos’s shoe collection, the infamous and probably staged attempt on her life, and similarly unflattering but heavily publicized episodes.

What’s left is a carefully composed narrative that’s difficult to follow on first listen but much clarified by the album’s liner notes, which read like a script. Byrne moves his heroine from impoverished, frustrated young love on “The Rose of Tacloban,” to confidence in her femininity on “Men Will Do Anything,” to a tragic realization that she has gone unappreciated on “Why Don’t You Love Me.” It’s a strong, sure-handed plot that moves as though Byrne is completely oblivious to the difficulty of sympathising with Marcos. For those who don’t know much about the protagonist, it’s a powerful story. For those with an even passing familiarity, though, the rose-tinted perspective of the lyrics seems rather surprising.

Luckily, the music—even closer to pure pop than Byrne’s Talking Heads work—is fantastic. Fatboy Slim brings a processed, electronic-tinged danceability to a collection that evokes the disco funk of New York’s Studio 54, where Marcos was famous for dancing with celebrities like Andy Warhol. Warhol is actually name-dropped on “Dancing Together,” which features a mix of crashing drums and a funky bass line that make it the album’s closest approximation to both disco and hip-hop.

Disco isn’t much of a stretch for Fatboy Slim’s dance music production style, but together Slim and Byrne explore an impressive range of genres. “A Perfect Hand” presents a guitar and piano simplicity that would be at home on a Bruce Springsteen album, with lyrics to match. Steve Earle, the only male vocalist on the album besides Byrne himself, growls, “There are many ways to win a game / And skill is not enough,” inviting the listener to imagine the pressure put on Marcos as a young woman striving for upward mobility in a society with no semblance of meritocracy.

Lauper headlines a cast of female vocalists that present a compelling and sexy image of Marcos’ character. Florence Welch, lead vocalist of British indie act Florence and the Machine, establishes this feel in the title track opener, crooning, “When I am called by God above / Don’t have my name inscribed into the stone / Just say, ‘Here Lies Love.’”

Byrne and Slim quickly establish musical and thematic focus in this opener: its blend of processed dance rhythms and orchestral accents serve as a fair synopsis of the album’s sound, and the inspiration for the album’s title—Marcos’s asking that “Here Lies Love” be inscribed on her tombstone—is immediately explained.

For most of the sprawling 22-song album it feels like the difficulty of painting a sympathetic portrait of a woman who wants herself referred to as “Love” on her gravestone has been brushed over. But there are exceptions, moments in which Byrne chooses to face Marcos’s dark side: “Order 1081,” for example, describes the declaration of martial law enacted by her husband in 1972. Here Marcos’s character sings “Got to stop all this confusion / Got to wipe away the scar / And the way to make it happen / Order 1081,” complicating her naïveté with darkly enchanting strings that suggest her awareness and fear of a more sinister reality.

But the problem with “Here Lies Love” isn’t any lack of musical or lyrical complexity. If anything, Byrne and Fatboy Slim prove that they could make a fun, complex album—or, for that matter, a rock opera—on just about anything. The problem is that the near complete success of “Here Lies Love” only begs the question of why a more identifiable, emotionally compelling subject was not chosen. If Byrne set out to prove he could find the artful musicality in a seemingly distasteful figure, he has succeeded. But if he was aiming for emotional impact, he might have looked to a more sympathetic subject. But until Byrne decides to make “Here Lies Mother Teresa,” “Here Lies Love” will do.