The Protestant Ethic and The Spirit of Lamont 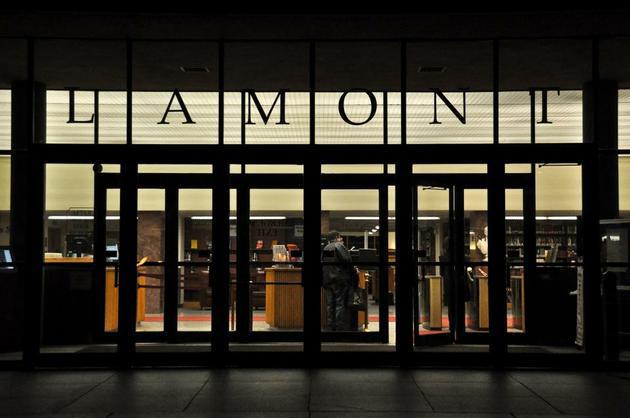 At 8:45 a.m. on the morning of Jan. 3, 1949, Lamont Library opened its doors for the first time. The building had taken two years and $2.5 million to construct, which apparently went to good use—on the day of Lamont’s ribbon-cutting ceremony, The Crimson bragged that the box-like red-brick structure set a “new mark in functional design.”

The library, which had first taken form in the minds of Boston architect Henry R. Shepley, class of 1910, and Harvard University Library Director Keyes D. Metcalf more than a decade earlier, charted new pedagogical territory: It was the first in the United States designed specifically for undergraduate use. Lamont’s open alcoves, innovative (for its time) card-catalog system, and plentiful reading rooms made it particularly well-suited to house the academic endeavors of Harvard College’s industrious student body. Contemporary observers were so impressed that local businesses took special efforts to highlight their association with the new development—the Sikes Furniture Company, for example, proclaimed with pride in an advertisement (which now sits on display in Lamont’s basement) that its “seats of knowledge” filled the library’s reading rooms.

Over the course of the building’s history—which includes memorable moments like the “Great Burrito Riot” of 2005, when 1,500 undergraduates stormed the library in hopes of snagging free Felipe’s promised by the Undergraduate Council—Lamont has come into its own in ways that its founders hardly could have imagined. It now serves as the epicenter of Harvard academic life, the site of countless nights spent preparing papers and problem sets.

At some point in his or her career, almost every Harvard student comes to the building to learn in it. But, as the regular patrons discover, there is much to learn from it as well.

Lamont houses everything from an impressive sheet music collection to an assortment of antique telescopes. Its walls are adorned with colorful exhibits honoring the winners of Philip Hofer Book-Collecting Prizes and the photography competitions sponsored by the Office of International Programs. On the third floor, you can find a literary map of Cambridge, highlighting spots like Weeks Footbridge—the site of Quentin Compson’s suicide in The Sound and the Fury, (Faulkner wrote that Harvard was a place “where the best of thought clings like dead ivy vines upon old dead brick”). Alongside it stands a display on Harvard’s poets, which chronicles the lives of Eliot, Frost, Lowell, and Stevens, and reveals that Gertrude Stein did not, in spite of the popular myth, receive an “A” for writing that it was far too nice a day to take an exam on the final for a William James-taught psychology seminar.

More than anything else, though, the library teaches us about the students who call it home. Lamont embodies the ethos of Harvard better than any other place on its campus. It is the school’s foremost temple to its reigning ideology—the Protestant ethic expressed in the Biblical admonishment: “See thou a man diligent in his business? He shall stand before Kings” (Proverbs, 22:29).

This sanctification of labor permeates Lamont, where Harvard students, hounded by the insatiable need to stay busy enough to deserve their privileged place in the modern meritocracy, combat fears of inadequacy through righteous striving. In the library’s confines, undergrads complain about work even when they have none, as if terrified by the prospect of idleness. For, as Max C. E. Weber wrote, in capitalist society, the waste of time is “the first and in principle the deadliest of sins.”

But in this putative weakness lies the strength of numbers. Misery loves company, and is abated by the silent camaraderie of a library filled with similar (albeit trivial, in the grand scheme of things) suffering.

This idiosyncratic functionality was pithily put into words by Harvard librarian Heather E. Cole, who, when asked about the library’s peculiar role as a social center, responded, “I think people make of Lamont what they need to.”

The library and the community it sustains emerge in response to the central anxiety of Harvard life: the failure to measure up. Under Lamont’s 24-hour fluorescent lighting, no one need bear this ponderous burden alone.