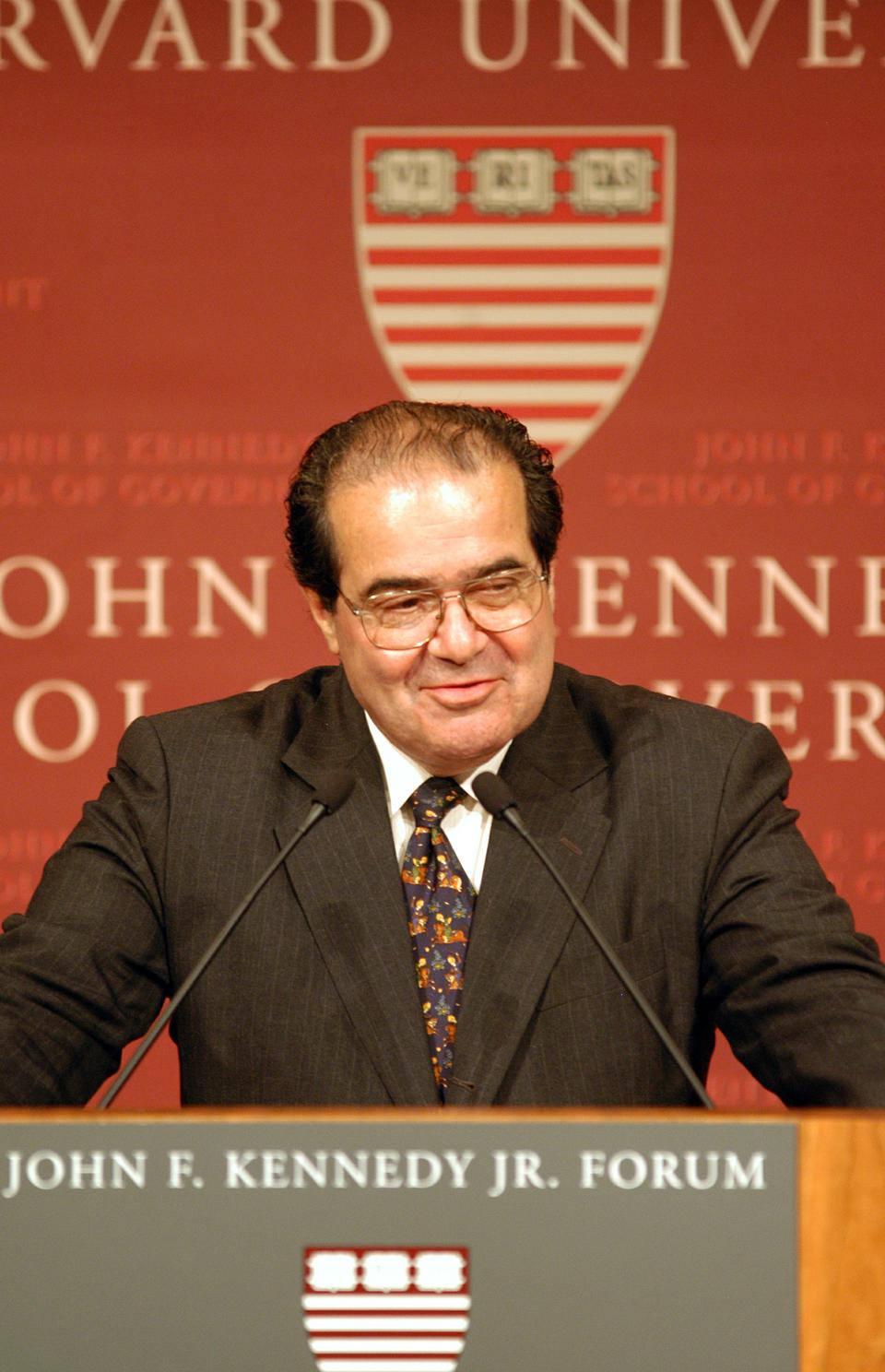 Fifty years after graduating from Harvard Law School, “Nino” has reached the top of his profession. He has been a Faculty member at the University of Chicago, Assistant Attorney General of the Office of Legal Counsel, and has served on America’s highest court since 1986, where he has positioned himself as the intellectual leader of the conservative wing of the Supreme Court.

Friends say that the hardworking student 50 years ago possessed many of the traits that have defined Associate Justice Antonin G. Scalia’s time on the bench—his relentless work ethic, quick wit, and intellectual weight.

In Law School, friends say, Scalia was fiercely dedicated to his studies.

“For a time in our first year at law school, I lunched daily with Nino and another fellow, but I soon stopped. They would spend lunch going over the notes from their morning classes,” said Richard M. Coleman, who was Scalia’s classmate and friend during college at Georgetown University and law school at Harvard. “I said ‘this is more zealous than I want get.’”

For his part, Scalia admits to spending much of his time at the Law School studying.

“I do not look back at my years at Harvard Law School with great warmth,” he said. “I look back at them with great appreciation. I worked like hell. I didn’t spend a whole lot of time enjoying myself.”

Despite becoming consumed with his academic work and eventually the Harvard Law Review, where he served as an editor, Scalia found time to meet a Radcliffe undergraduate, Maureen T. McCarthy ’60, whom he married.

“He was jovial, gregarious, good company, liked company, a good talker, could be quite funny in conversation,” Harvard Law School Professor Frank I. Michelman, who graduated from the Law School with Scalia, wrote in an e-mail.

The Justice’s humorous bent has also influenced his work on the Court.

Harvard Law School Professor John F. Manning ’82—who clerked for Scalia in 1988 and then argued cases in front of him as assistant to the solicitor general—said the Justice’s intellectual vitality was visible in oral argument as well.

“He’d come up with some pithy example that would capture the essence of a position. When it supported you, you were very happy and when it didn’t you were very unhappy.”

Besides delivering what are sometimes debilitating counter-arguments, Scalia also brings some levity to the bench.

A 2005 Boston University study determined that, of the Justices on the bench at the time, Scalia induced the most laughs during oral argument.

“Life in the law doesn’t have to be dull,” Scalia said. “I hope I haven’t lost a sense of humor as I’ve gotten older.”

His classmates say they did not predict their sometimes jocular peer would one day be a Supreme Court Justice.

“He was obviously smart and quick and seemed to relish conversation about the coursework and sundry issues that it raised,” Michelman wrote.

“I don’t recall envisioning any of my classmates a Supreme Court justice; it just was not the sort of thought that would have entered my mind at the time.”

Since President Ronald Reagan appointed Scalia to the bench, he has often been called the intellectual leader of the conservative wing of the court, according to Fallon.

“He is an absolutely brilliant writer. Perhaps the best stylist ever to serve on the Supreme Court,” Fallon said.

While Fallon is quick to praise the craftsmanship of Scalia’s prose, like many Faculty members at the nation’s law schools, Fallon disagrees with Scalia’s judicial philosophy.

Scalia is an originalist who believes in interpreting the Constitution in a manner that adheres to the Founders’ original intentions. Scalia said his alma mater is not uniquely responsible for teaching young lawyers to embrace shifting interpretations of the Constitution, a position which he opposes.

“You can’t just blame it on Harvard. It’s the overwhelming philosophy in law schools and on the bench,” he said.

He said he believes that mentality has even made its way into public discourse.

“The people believe the Constitution means whatever they care passionately about,” Scalia said.

He was also displeased with changes in the judicial nomination process, where, Scalia said, some politicians approve nominees based on how they are expected to vote in politically charged cases.

Despite knowing he was conservative, the Senate approved his appointment in 1986 with 98 votes, Scalia said. Now, he said, he does not know if he could get 60—the number of votes necessary to overcome a filibuster.

“The process has gotten much more adversarial,” he said.

The Senate is currently considering the Supreme Court nomination of Solicitor General and former Dean of Harvard Law School Elena Kagan, with whom Scalia has also crossed paths at Law School events. In an interview with The Crimson on May 18, Scalia’s comments about Kagan were brief, but positive.

“I consider Elena Kagan a friend,” he said. “I’m sure that I would get along very well with her were she to be on the court. Beyond that it is none of my business.”