Architects of the Outdoors 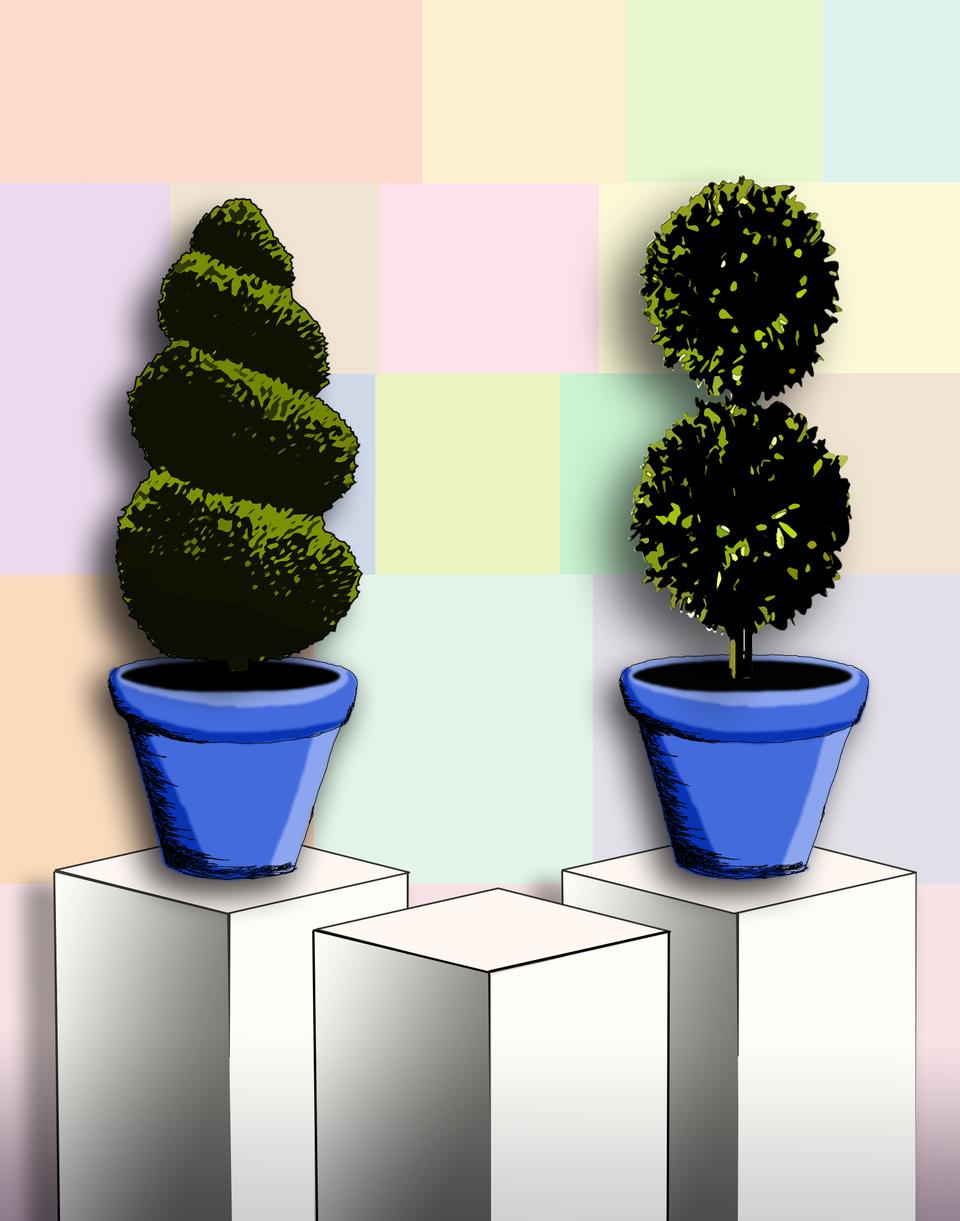 Wandering the grounds of Harvard’s Arnold Arboretum is, for the casual visitor, a primarily aesthetic experience. On a crisp September morning the Arboretum’s sprawling landscape is all gently swaying shrubs and trees, ripe berries, and flowers in full bloom.

At the southern edge of the park stands Peters Hill, the Arboretum’s highest point, from the top of which one can see the Greater Boston area spread out at one’s feet, the still woody flatland framing the distant skyscrapers that rise over the sea. It presents the onlooker with a jarringly unexpected perspective; it at once overwhelms and calms. It is landscape experienced as sublime art.

The landscape of Harvard’s campus may not itself be one of vaulting canopies and scenic overlooks, but a brief stroll across the Yard’s cropped grass or past the Faculty Club’s manicured shrubbery is enough to prove that campus landscaping comes with aesthetic considerations of its own.

Wayne P. Carbone, Manager of Harvard’s Landscape Services, lists the three major concerns of his department as environmental sensitivity, beauty, and safety. It is telling that the latter focus on the observer of the environment; after all, Landscape Services exists not to serve the landscape but to serve Harvard.

This drive to balance the functional and sustainable with the aesthetically appealing lies at the heart of Harvard’s many recent green initiatives, from the Yard Restoration Project that gave the Yard an organic face-lift in 2007 to the Community Garden that made the small plot of land outside Lowell House a home for lettuce plants and golden sunburst tomatoes earlier this year. It is the drive not just to preserve and restore our environment but ultimately to enjoy it. It is the drive to make land into art.

That the Arboretum’s landscape feels like art would be no surprise to the expert observer. The 265-acre landscape in South Boston is actually—save the general shape of the land—complete artifice. The Arboretum was designed in 1872 as a park by botanist Charles Sprague Sargent and Landscape Architect Frederick Law Olmsted, the man responsible for such American landmarks as Central Park and the Niagara Reservation. The Arboretum also conducts extensive horticultural and botanical research for the university.

Despite its naturalistic feel, the Arboretum’s collection of nearly 15,000 plants is carefully arranged, grouped by type, and especially rich in both native and exotic woody plants.

Julie A. Warsowe, Manager of Visitor Education, knows well the power of its naturalistic illusion: “it is, in some ways, a trick.”

“The idea,” she says, “was to create something that felt so natural that people could get lost in the environment. You have the experience of meandering down a country road, but a scientific design is behind everything you see.”

Warsowe says this careful design owes much to the parks movement, a movement based on the feeling that “people need open space to be complete people,” which was peaking at the time of the Arboretum’s opening in the late nineteenth century.

Michael Van Valkenburgh, the Landscape Architect responsible for projects from the renovation of Pennsylvania Avenue to the renovation of Harvard Yard itself, has noted the recent groundswell of Harvard initiatives meant to make campus a more attractive, open space. According to him, it is a phenomenon not unique to Harvard but still bolstered by Harvard’s uniquely historic landscape.

“It’s little exaggeration to say that the Harvard community worships its great old trees,” Van Valkenburgh writes via e-mail. But, he adds, “In the last decade, the hunger for a connection to a nurturing landscape on campuses and in cities has dramatically increased.”

Van Valkenburgh, has also taught for 28 years as a Professor of Practice at Harvard’s Graduate School of Design (GSD) in the Department of Landscape Architecture. In the future, he says, “I don’t want the department to lose sight of design in its aesthetic and experiential dimensions—beauty and sublimity and depth of feeling will never be unneeded.”

The beauty Van Valkenburgh cites as a key component of design can be immediately felt in Harvard’s most famous landscape: the Yard.

Louisa C. Denison ’11, who remembers the Yard in the fall as her most treasured mental image of Harvard’s campus, knows the simple power of a well-preserved, carefully designed landscape. She puts it quite simply: “being in a beautiful place affects you.”

THE SEEDS OF CURIOSITY

With this sentiment in mind, Denison helped to create the Community Garden, which she now co-manages. In spring 2010, various Harvard organizations—including the Center for Health and the Global Environment, Harvard University Hospitality and Dining Services, and the Office of Sustainability—worked with motivated undergraduates like Denison to create a multipurpose space.  The Garden’s creators hope not only to apply principles of sustainable gardening, but also to educate others about these same principles. This mission in part depends on the Garden’s aesthetic appeal.

“It was assumed that the garden would have to be beautiful in order to work,” says Denison. “Despite the University’s many ‘green’ initiatives, there hadn’t been a really beautiful demonstration of sustainability, a place to build community around sustainability.”

Rebecca J. Cohen ’12, another Garden Co-Manager, confirms the importance of aesthetics in the Garden’s design, an enterprise undertaken with advice from faculty from the GSD. “We really made an effort,” she says, “to make something that wasn’t just rows and rows of vegetables.”

The Garden certainly isn’t that; its carefully arranged plants and worn picnic tables make for a space that invites exploration and relaxation. Denison makes this careful balance sound absolutely natural, explaining that beauty and functionality are, at least in horticulture, not just complementary but often symbiotic: “You’re more interested in learning about a space if it’s beautiful,” she says. “And the more interesting the use of space is, the more beautiful it becomes.”

To Denison, Harvard seems particularly obliged to use its space both beautifully and sustainably. As she points out, Harvard’s vast resources give it a unique opportunity not just to experiment with its own landscape, but also to educate others in the sustainable practices it develops. It is a task that recalls the Arboretum’s threefold mission of horticulture, research, and education: a call not just to gain knowledge but also to spread it.

“Our job,” she says, “is to apply the same thoughtfulness that we apply to our studies to our landscaping.”

Carbone’s 21 years of experience at Harvard have allowed him to experience firsthand the university’s mounting drive to sustain, to beautify, and to edify. “We’re doing the experimenting,” Carbone says. “What we learn, we want other people to know, whether it’s a homeowner or another institution.”

As for the University itself, Carbone feels that one of Harvard’s main goals is the creation of more open community space on campus. As proof he cites the Common Spaces Initiative, which has brought changes from the impossible-to-miss colorful chairs populating the Yard to the occasional dramatic and musical performances outside the Science Center.

“The idea is to make campus more appealing for students to utilize,” Carbone says, “to bring everybody together.”

The ideal of a nurturing landscape has indeed been a driving force behind Harvard’s numerous recent initiatives, but its appeal is by no means limited to the University’s staff and students. It is an idea with universal attraction, a drive to make our surrounding landscape both enduring and aesthetically inviting. Along these lines, landscape should appeal to onlookers in order to bring people together—to unite through a shared love for a beautiful, open landscape.

Denison sees making a landscape that brings people together as a last, necessary step in designing a space like the Community Garden. It is, she says, the question those behind the Common Spaces Initiative were asking of Harvard’s campus: “it’s beautiful, but are people using it?”

Of course, a beautiful, open landscape requires regular care. Only recently has Harvard moved to make that care truly sustainable, to ensure that Harvard’s landscape can be enjoyed by generations to come.

Beginning with the Yard Soils Restoration Project of 2007, Landscaping Services has worked to make Harvard landscaping an entirely organic process, a goal Carbone believes will be reached within the next year and a half. This will have to be accomplished despite the challenge presented by Landscaping Service’s limited domain over just 65% of Harvard’s landscape; individual departments generally control their own immediate surroundings.

Carbone sees Harvard’s organic initiative as a natural outgrowth of its position as a pioneer in sustainable landscaping. “Harvard has been a leader,” Carbone says. “We started back before organics was the hip thing to do.”

Reaching the goal of 100% organic landscaping will mean that Harvard is fertilized solely by recycled landscape waste. Instead of bringing in synthetic fertilizers and disposing of waste elsewhere, as in the past, Harvard landscaping will become essentially one big cycle. According to Carbone, this cycle is not only good for the environment but actually cost-neutral due to Harvard’s being able to compost its own waste at the nearby Arboretum.

The price of this environmental initiative has been cut further by a reduction in number of floral arrangements, a change that also indicates a return to a more traditional look for campus. The goal, he says, is simple. “We’re trying to make a healthy plant that will be aesthetically pleasing.”

“President Faust has been highly committed to sustainability, and thus Harvard’s campus is now not saturated with pesticides and herbicides,” he writes. “Green as the new Crimson is a metaphor for something more than a groundswell; it is darkness turning into light.”

Sculpting a beautiful and inviting landscape calls for a certain degree of  ingenuity. For those involved in the creative process, shaping a landscape can feel like art.

Stephen W. Schneider, the Arboretum’s Manager of Horticulture, cites the work of one of the Arboretum’s horticultural technologists—who each manage 20-30 acres of Arboretum land—as a particularly apt example of landscaping creativity. The technologist was assigned to manage the then-overgrown Oak Path. “He worked to keep a backwoods feel to it, but to make it look cared-for,” Schneider says. In his opinion, projects like these highlight the creative aspect of landscaping.

Carbone agrees. “Creativity always plays a role,” he says, “whether it is selecting the correct tree or shrub or flowers for a planting project, determining the best way to protect the landscape during a construction project, or coming up with a compost tea recipe that will satisfy the biological needs of a soil.”

Despite his many years at Harvard, Carbone’s favorite campus landscape is no other than the favored photo backdrop for the hordes of tourists who roam the Yard in all seasons. But his experience caring for and arranging that landscape lends personal depth to his feelings for the Yard, a depth of sentiment brought about not only by observing but by himself refining the landscape. It is, in a sense, the feeling of an artist for his best work.

“We work very hard to keep the ominous shade tree canopy healthy, whether it’s managing the Elm population from Dutch Elm Disease or structurally pruning the trees planted during the tree restoration project over the past 15 years,” he says.

But all the spent creativity, all the yearlong effort, is worth it, Carbone affirms. “It’s gratifying to walk around the Yard on Commencement day as the sun filters through the canopy on the green grass and chairs.”