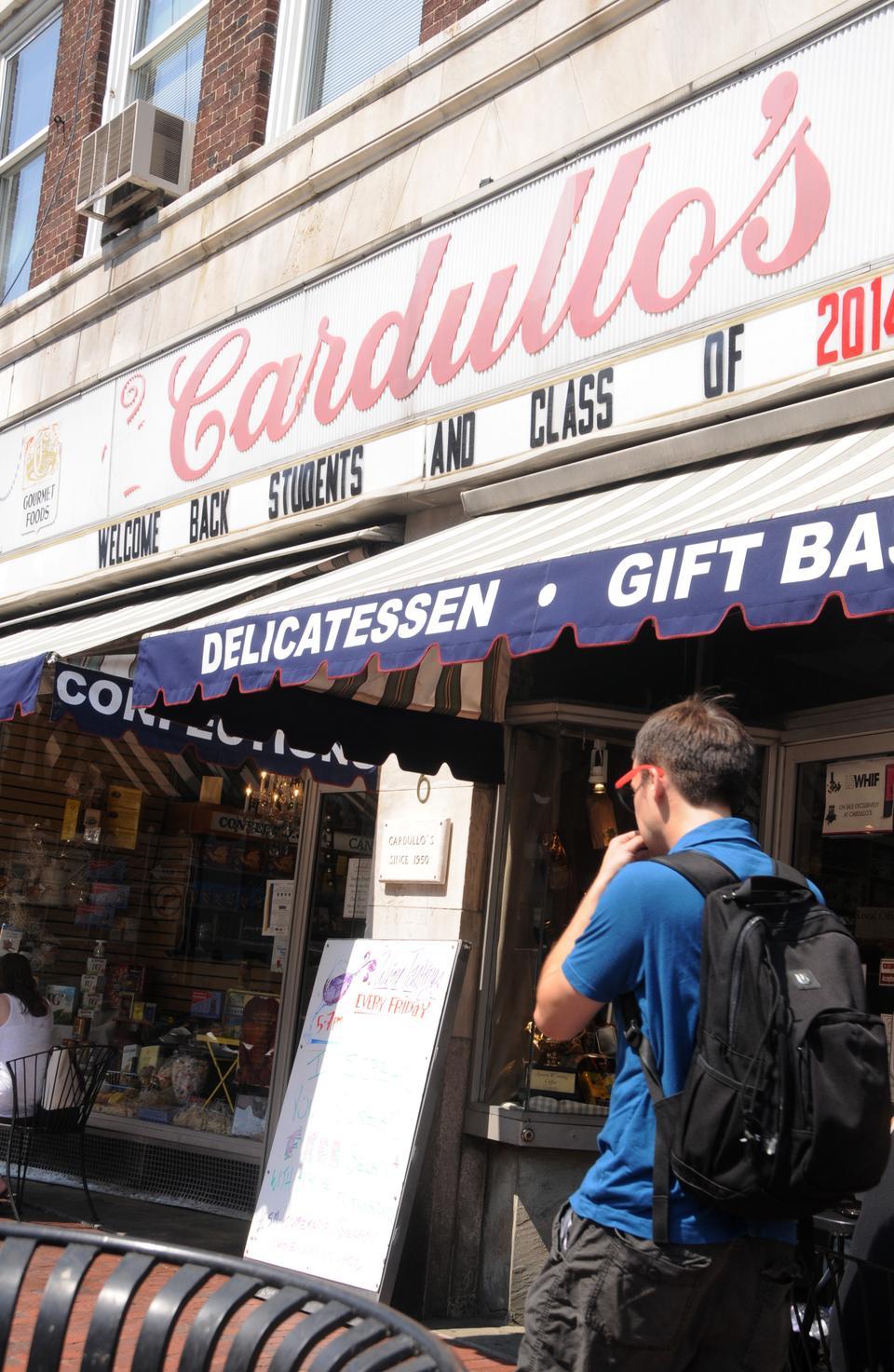 Cardullo’s recently took the television out of their front display window, much to the chagrin of a number of Cambridge residents, specifically the members of the Chair Club, who would sit outside and watch the Red Sox play through the window.
By Sofia E. Groopman, Crimson Staff Writer

An empty space in the window of Cardullo’s Gourmet Shoppe has left an even larger void in the hearts of members of the Chair Club, a stalwart group that regularly convened before the storefront to watch Boston Red Sox games.

After the team lost two out of three games to the Tampa Bay Rays—making it unlikely that they would secure a title this season—the store’s part-owners Donez J. Cardullo-Tavilla and Francesca Cardullo decided to remove the television, finalizing the change on Monday.

Cardullo-Tavilla said that considerations of how the street-side programming figured into Cardullo’s mission as a gourmet food store had prompted the move. She recalled the words of an interior decorator they had hired: “Is this a sports store or a high-end gourmet food store?”

“It doesn’t fit in with our plan to revitalize the store as a serious food player,” Cardullo-Tavilla said of the television.

She plans to redesign the window display by imitating her grandmother’s own setups in the Brattle Street store decades ago: luxury food items showcased in the style of old European shopfront windows.

The change has upended the tradition of the dozen or so members of the “Chair Club”—a group that started out informally, but has since grown to a loyal contingent that watches games on chairs outside of Cardullo’s.

Members gathered in front of the store yesterday night to protest, listening to a Red Sox game on the radio.

“I feel beside myself and that’s putting it lightly,” said Kelly Dugas Coveney, who has been a member of the Chair Club since 2006. Her history with the club runs deep: she met her husband—Dennis Coveney, the self-professed CEO and founder of the club—at one of its meetings in 2006. The couple was married in front of the television screen on April 6, 2009, the opening day for the Red Sox.

“I feel as bad as losing a family member or a family pet,” Dugas Coveney said of the removal of the television.

The Chair Club was occasionally joined by celebrities such as Ben Affleck and Jennifer Garner, according to Coveney. The host of National Public Radio’s show “Car Talk,” Tom Magliozzi, said he used to frequently watch the games at Cardullo’s when he was in Harvard Square.

Chair Club members said they cherished the way in which Cardullo’s screening of Red Sox games brought people together.

“It gathers all economic groups together, from Harvard professors to homeless people on the street,” said Robert Marshall, a member of the club since its creation in 2003.

Denise A. Jillson, executive director of the Harvard Square Business Association said that while she respects Cardullo’s decision, she was “sad to see [the Chair Club’s] demise” and is working with the club to find another location.

“It won’t be the same,” Jillson said. “It was founded in front of Cardullo’s, it has become a summer pastime for the past seven years, and it is part of the vibrancy and energy of upper Brattle.”

Her decision may have disappointed members of the Chair Club, but Cardullo-Tavilla said she wants the store to remain involved in the community by buying products locally and participating in a Cambridge Police Department charity auction.