‘The Town’ Explores Boston’s Darker Side 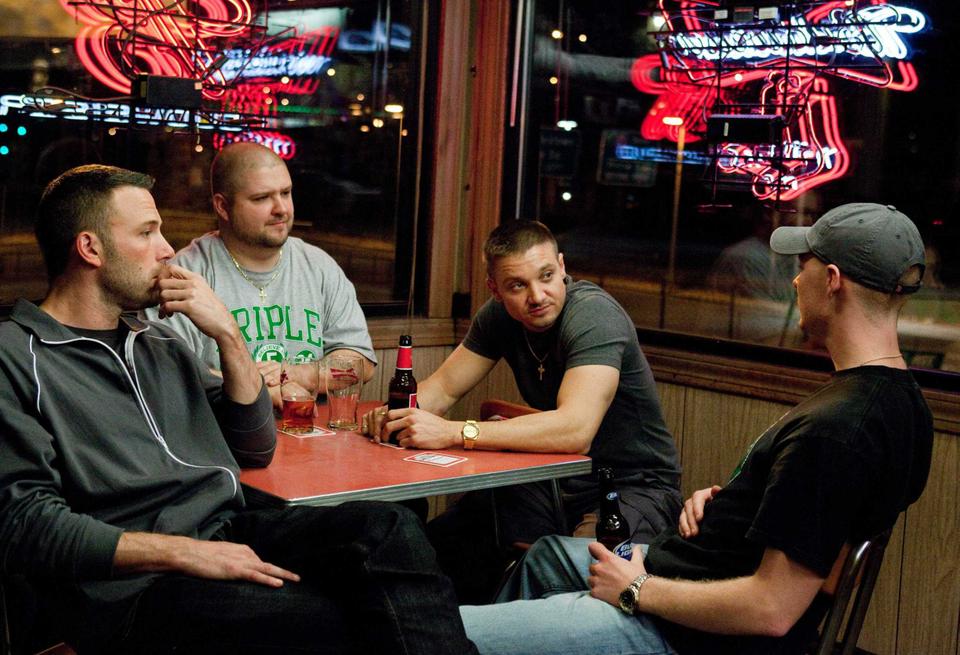 Affleck meets with fellow criminals in "The Town."
By Lauren B. Paul, Contributing Writer

If there’s one thing actor, writer, and director Ben Affleck loves, it’s Boston, and he wants to make sure everyone knows it. From the sweeping views of the city’s skyline, to the heart of Harvard Square, and even to the bleachers of Fenway Park, “The Town” makes sure to leave no Boston landmark untouched. Though the unrelenting shots of Beantown can begin to feel a bit like a protracted Duck Tour, it’s clear that Affleck’s hometown is his muse. And this smartly-written thriller, which is heightened by the uniformly realistic and compelling performances of its strong cast, proves that Affleck is at his best when he knows what he’s talking about.

The town for which the movie is named is Charlestown, Mass., an infamous area just outside Boston in which bank robbery has become a kind of family trade, passed down from father to son. Affleck plays Doug MacRay, a tough “townie” who falls in love with Claire (Rebecca Hall), who happens to be the hostage from his most recent bank robbery. When Doug’s best friend and partner Jim (Jeremy Renner) finds out he’s dating the one person who could give them away to the FBI agent hot on their tail (Jon Hamm), Doug is forced to make a decision. But when he tries to choose a life with Claire, he finds out that getting out of Charlestown and its twisted web of thieves is much harder than it seems.

In his directorial follow up to 2007’s “Gone Baby Gone,” Affleck proves that he can get exactly what he needs from his cast. Renner shines with a flawless delivery as the slightly unstable but loyal best friend, with an extremely convincing accent, biting wit, and a scowl seemingly tattooed on his face. Affleck offers a strong, consistent performance as well, sporting every conflicted emotion in his clenched jaw. Hamm gives as much depth to his bloodthirsty FBI agent as possible, making the most of his sarcastic comments and bitter staring matches with Affleck.

In addition to the strong male performances, Hall gives an equally conflicted and passionate performance. Where other actress may have let Claire fade in the presence of such strong male characters, Hall gives her character a strong wit and realistic intelligence, making up for what the character lacks in intuition. The only performance of almost no merit is that of Blake Lively as Doug’s former flame and Jim’s sister Krista. Her flat delivery and awful accent perhaps wouldn’t be so horrible if the other performances weren’t so strong. But in Affleck’s otherwise pragmatic and accessible setting, she sticks out like a fake, overly made-up sore thumb.

Though the advertisements for “The Town” strongly evoke Martin Scorcese’s 2005 Oscar-winner “The Departed,” one shouldn’t worry about sitting through a carbon copy. “The Town” is innovative and original, with stronger dialogue and a decidedly different story. In this film, the narrative is more closely tied to the thieves, rather than the officers. “The Town” also lacks the darkness of “The Departed,” both in lighting and in content: thieves are supposed to be bad, not the police department, but in this film many expectations are defied.

Affleck also directs some excellent action sequences. The anticipated high-speed car chases are much more intense in the narrow, brick backstreets of Brighton, where the walls close in from all sides. The thieves also pull off some ambitious heists, some of which include beloved Boston attractions. Though the film is long, it never loses its sense of tension during its action scenes showing the gang’s robberies, its explication of Claire and Doug’s potentially dangerous relationship, or its denouement as the FBI gets closer to breaking the case.

“The Town” is overflowing with smart dialogue, thrilling action, and Boston pride. Affleck creates a portal into the twisted world of the robbers of Beantown, making an otherwise frightening place new and exciting even to those who walk its streets every day.