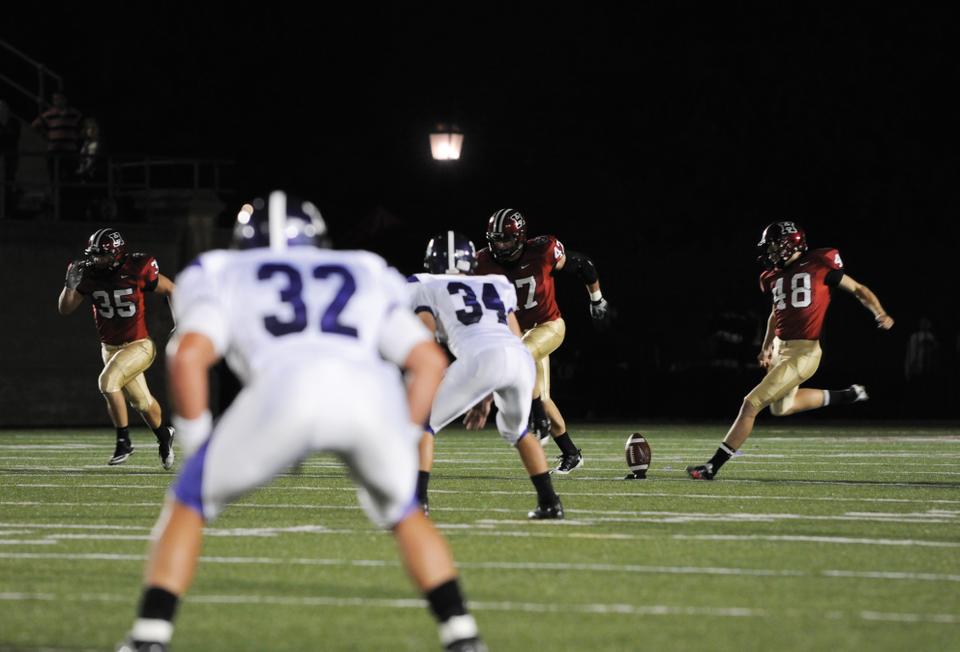 David Mothander may not be a member of the explosive offense or the stifling defense, but in his first game as the placekicker for the Harvard football team, the true freshman played a vital role in the Crimson’s 34-6 victory over Holy Cross last Saturday night.

“It was a great atmosphere to play in for my first game, being a night game in front of all those fans,” Mothander says. “It was a great way to kick off the season.”

Mothander is no stranger to being in the spotlight when it comes to capping off a drive with some points. As a kicker and quarterback in high school, the former Maxpreps first team All-American led his St. Margaret’s Tartans to a small schools state championship while setting a California high school state record with 99 extra point kicks in a season. Last season, in a post-graduate year at Phillips Exeter Academy, Mothander gained recognition as a 2009 New England Preparatory School Athletic Council (NEPSAC) All-New England selection, leading his team to a NEPSAC Championship and an undefeated season.

Yet, success in high school football does not always necessarily transfer to the college gridiron.

But unlike other first-year starters who may have trouble adjusting to the speed of the college game, Mothander has embraced the challenge of taking on collegiate teams.

“The guys we face here in college are definitely faster, bigger, and stronger [than in high school], but I don’t let that phase me,” Mothander says. “All I want to do is execute my job perfectly.”

Despite Harvard’s dominance in the Ivy League over the past decade, inconsistent special teams play—particularly in the kicking department—has hindered the Crimson’s ability to score points by kicking the football through the uprights.

But in Harvard’s season opener, any signs of special teams problems were nonexistent, as Mothander accounted for 10 of the 34 points put up by the Crimson, going 2-for-2 in field goal attempts from 26 yards and 24 yards, and 4-of-4 in extra point opportunities.

And though Mothader has registered just one career start in a Harvard uniform, his strong kicking performance so far has provided the Crimson faithful with an optimistic feeling that Harvard’s struggles in the kicking game could indeed be coming to an end.

Armed with a powerful leg, Mothander was able to do more than simply split the uprights. In handling kickoff duties, he averaged nearly 64 yards per kickoff and even boomed one deep into the endzone for a touchback.

His kicking effort gave the Crimson defense plenty of breathing room, and forced Holy Cross to begin most of its offensive drives deep in its own territory.

“[Mothander] did great on Saturday,” says senior wide receiver Marco Iannuzzi. “Coming out of high school, he came into the high stress of the college game and gave us deep kickoffs, perfect field goals and a solid effort.”

“He and the special teams unit were great all night,” Iannuzzi says. “He gained confidence in his ability, knowing that he can perform at the [collegiate] level. The coaches believed in him and that let the rest of the team rally around the special teams and do what we did.”

“I don’t think that this honor should just be an individual award for me; it’s a team award,” Mothander says. “Without the offense and defense executing all night long, I wouldn’t have had the opportunity to make my kicks and post the numbers I did.”

With the demonstration that Mothander put on for the crowd and the rest of the Ivy League on Saturday night, Harvard may have found one of the pieces it needs to elevate its special teams play to the next level and add an extra dimension to its already impressive list of weapons.