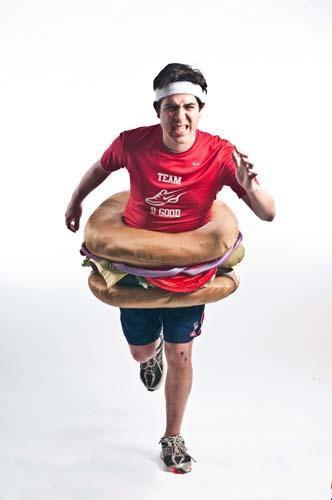 Better known to many of his peers as Burgerman, Samuel B. Novey ’11 will serve as first class marshal for the class of 2011, the Harvard Alumni Association announced today.

Novey and Second Class Marshal Moira E. Forberg ’11 will work with the six other students elected to the Senior Class Committee to plan Senior Week activities, choose the Class Day speaker, and represent the class of 2011 within the Harvard Alumni Association.

Novey said that his primary goal as first class marshal is to foster class unity, and expressed enthusiasm at the caliber of his fellow marshals.

Several of the marshals ran campaigns on Facebook, and one of Long’s heavily publicized promises may be the most eagerly anticipated by his classmates: his pledge to “ice” University President Drew G. Faust—a prank involving the presentation of a bottle of Smirnotff Ice that the recipient must immediately drink.

“The first feeling I had upon finding out was excitement. Then I realized that, because of my campaign promise, now I actually have to ice President Drew Faust,” Long said. “My only concern is that she reads this article and comes prepared with a counter-ice—although that will probably make it even more epic.”

The announcement came as a surprise to several of the marshals, who found out about their election when they surreptitiously checked their cell phones during class.

Stepping out of his graduate seminar on Middle Eastern Studies to use the bathroom, Alhammad discovered a message from fellow marshal Stein informing him of the good news.

“I was really, really excited—I had to contain myself for the rest of class,” Alhammad said.

Viswanathan, an inactive Crimson news editor, said she was initially puzzled by the deluge of messages when she first glanced at her phone.

The selection of the Class Day speaker will be a top priority, according to Stein and Viswanathan.

Drawing on her experience at two prior Harvard commencements, Viswanathan emphasized the value of humor in a Class Day speech: “Tina Fey, Jon Stewart, or Stephen Colbert would be amazing,” she said.

The eight class marshals will be joined on the Senior Class Committee by 13 House representatives, who will be elected next week.

—Staff writer Katherine M. Savarese can be reached at savarese@fas.harvard.edu.