In a star-studded lecture, students heard from three greats 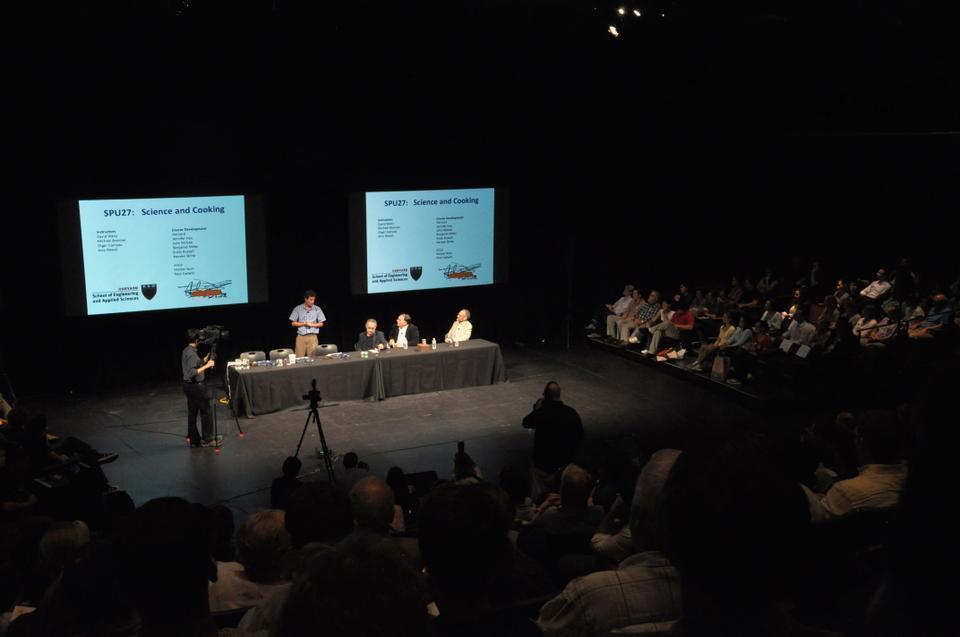 The instructors of Science of the Physical Universe 27: Science and Cooking present a lecture at the Loeb Drama Center. (CORRECTION: The caption incorrectly stated that the image depicted Lowell Lecture Hall. The caption has been fixed to reflect the error.)
By Gautam S. Kumar and Evan T. R. Rosenman, Crimson Staff Writers

University staff roped off sections of the Science Center yesterday to limit student crowds for the second lecture of Science of the Physical Universe 27, “Science and Cooking: From Haute Cuisine to the Science of Soft Matter,” and the course’s first public lecture also drew a large audience to Loeb Drama Center yesterday evening.

The buzzed-about General Education course, which explores the physical and chemical properties of matter using cooking science, has attracted overflow crowds ahead of the results of its student lottery, which will be released today.

Students spilled outside the Science Center yesterday afternoon to see guest lectures from world-renowned chefs Ferran Adrià and José R. Andrés and prominent food author Harold McGee. Those not among the 350 allowed into Science Center Hall C were directed to additional classrooms that provided a simulcast feed.

For the chefs, the lecture was the beginning of what they say they hope will become a larger trend, which Andrés, who manages several award-winning restaurants across the U.S., called in an interview “the great synergy between physics and cooking.”

Andrés, who left school at fourteen but soon after joined Adrià in his kitchen, said that he never stopped being “highly interested in learning.”

“To come from that and now be teaching at Harvard—it’s very humbling,” Andrés said.

Andrés added that the two chefs view eating as one of the two essential activities that humans participate in each day, the other being breathing. “Breathing is boring, but food is more than just a social event,” Andrés said.

Andrés and Adrià consistently repeated their belief that innovative approaches to cooking can solve many of the issues that food is believed to create, such as hunger, obesity and even environmental damage.

Andrés cited a quotation from noted gastronomic philosopher Jean Anthelme Brillat-Savarin: “The future of nations will depend on how they feed themselves.”

“If we take that phrase and bring it up to the highest meaning and possibility, what we see today is teaching cooking as a science is part of this vision,” Andrés said.

In the lecture, both chefs maintained that cooking is a high science, worthy of as much study as history or biology.

“When you go to a museum, why [are] there only artifacts and still-life[s]?” Adrià asked through a translator during the student lecture. “Why aren’t there dishes on display?”

At the end of the lecture, Adrià  provided a demonstration of ”spherification,” the process of gelatinizing the outside of a liquid droplet in order to create an edible, fluid-filled capsule.

Adrià, Andrés and McGee reunited yesterday evening to give a lecture open to the general public following an introduction from College Dean Evelynn M. Hammonds and School of Engineering and Applied Sciences Dean Cherry A. Murray.

“I want to come out as a foodie and also a scientist, so this is like heaven for me,” said Hammonds, who holds advanced degrees in physics and the history of science.

Murray spoke briefly about Harvard’s history of involvement in the food science research, a topic explored more fully in McGee’s lecture, which centered on worldwide developments in food science since the end of the 17th century.

In his later speech, Adrià again articulated the need for creativity, innovation and scientific rigor in the cooking industry.

“Today we are not really studying cooking and the meaning of cooking in our society,” Adrià said, adding that it is “unbelievably important that cooking got into the most important university in the world.”

The chef went on to describe his plans for transforming his primary eatery, El Bulli, from a restaurant into a “center for creativity” in order to help advance the field of cooking science.