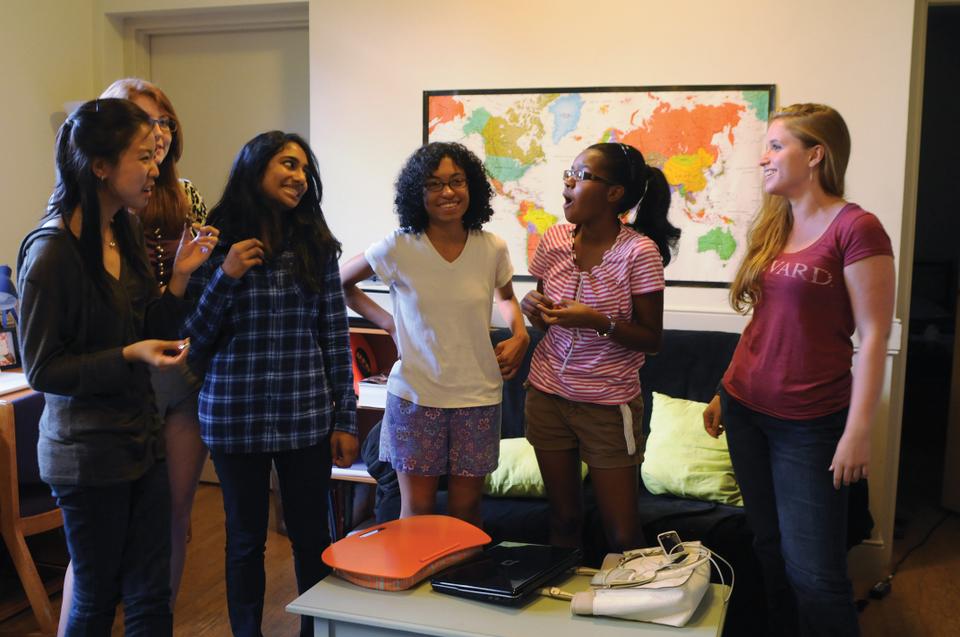 These freshman roommates in Weld all hail from different parts of the Western Hemisphere. Between the six of them, they speak at least seven different languages.
By Danielle J. Kolin and Naveen N. Srivatsa, Crimson Staff Writers

Da-Bin Ryu ’14 wanted to live with an international student, and Samantha M. Barkowski ’14 went to Jordan and traveled to Kuwait during her gap year. Their third roommate, Sarah Abushaar ’14, is from Kuwait.

While this final group’s similarity is a coincidence, the fact that these roommates have similar—but not too similar, they say—personalities and interests is the product of a careful and unusually nuanced process, in which resident deans hand-select rooming assignments for freshmen.

The day is June 10, and Resident Dean of Freshmen Sue Brown embarks upon what will be a five-week quest: sorting 398 first-years into rooms in Grays, Matthews, and Weld Halls.

Much of this task remains the same as it has been in years past. She sorts freshmen largely by hand, thoroughly reading incoming freshmen’s responses to roommate questionnaires. During the process, her floor is covered with a mass of paper that is eventually divided into nine distinct piles—one of the early steps in the lengthy matchmaking process.

But in the midst of that process, technology rears its head. In Adobe Acrobat, Brown categorizes freshmen, using colors to sort the incoming students by geography and stamping the freshmen’s rooming surveys with various logos made in Photoshop. A cartoon of a chess piece marks a chess player. A compass is reserved for the “curious and adventurous” freshman, Brown says.

Emblazoned with colors and cartoons, the surveys are printed out and scattered on a floor in Brown’s home. From there, she divides the students into three categories based on students’ self-reported levels of sociability.

Social tendencies are one of the most important factors in determining roommate compatibility “because it’s going to be something that will come between roommates before they ever really get to know each other,” she says.

But other factors matter as well, Brown adds. From the sleeping habits freshmen keep and the sports they play, to the neatness they maintain and the number of roommates they want, the resident deans take into account a slew of determinants of each first-year’s personality.

Some factors, like musical tastes, are often stronger predictors of compatibility than others, according to Brown.

“If you can find a group of guys who all like rap and country/western,” she says, “you think, ‘They might get along.’”

A group of guys lives in Matthews, and they all like rap and country music. And so far, they get along great.

Occupying a room on the third floor of Matthews, Colin T. Quirk ’14 says he wrote on his housing survey that he wanted to live with two athletes. One of his roommates, Tyler Ott ’14, is a tight end on the Harvard football team. And his other roommate, Cameron J. Croy ’14, was wearing a dappled gray t-shirt that read “Property of Harvard Wrestling” while being interviewed.

Brown “couldn’t have matched [them] up better,” Croy says.

Another key to their match is their hometowns. Ott is from Oklahoma and Croy is from Tennessee, while Quirk is from Boston. Resident deans often try to place local freshmen with those from outside the area, especially international students for whom going home during vacations is more difficult, according to Dean of Freshmen Thomas A. Dingman ’67.

To go home for long weekends or vacations, Abushaar would have to travel for more than 12 hours to her home in Kuwait. On the other hand, Abushaar’s roommate, Barkowski, is from Dorchester, Mass., only a 20-minute drive away.

At Harvard, Barkowski said she wants to study Arabic, and Ryu, Abushaar and Barkowski's roommate, also expressed an interest in diversity on her rooming survey.

“We’re both very interested in languages and foreign cultures,” she says of Barkowski and herself.

Across from Matthews in Weld Hall, six language aficionados live in a suite. Together, the six women speak English, French, Italian, Spanish, Creole, Korean, and Telegu.

They hail from all over the Western hemisphere, but despite their geographic and cultural differences, the six exuberant freshmen say they are already incredibly close.

The security blanket may be a comfort, but the primary goal of the Freshman Dean’s Office, says Dingman, is twofold—to ensure that freshmen “feel a level of comfort in going home every day” while still allowing them to “grow and learn from one another.”

Roommates Sheyda Aboii ’14 and Stephanie Charles ’14 said they had a “really enlightening” conversation about Haiti’s history after Aboii shopped Societies of the World 25: “Health, Culture and Community: Case Studies in Global Health.” Charles is from Haiti, and one of the course’s instructors is Harvard Medical School professor Paul E. Farmer, known for his work in Haiti with his non-profit health care organization Partners In Health.

But despite the FDO’s best efforts, their matches are not always perfect.

Every year, a small margin of freshmen—”about half a dozen”—are switched out of their original suites after approaching the FDO, Dingman says. Many more choose to block with and live with others in future years.

Still, Brown says a successful rooming match does not require cohabitants to be best friends.

“It’s not that we want to create these perfect little lifelong friendships, although I’m happy to hear when that does happen,” she says. “We’re okay with good working relationships, although we prefer it to be a little more dynamic than that.”

After organizing the rooms, the deans turn to assembling the entryways.

“You want it to be a diverse group, a microcosm of the freshman class,” Brown says.

But at the same time, the entryway can’t be so diverse that a student feels isolated. For example, the FDO tries to avoid placing only one international student in any entryway, Brown says. She also avoids putting two students from the same varsity sport or the same high school in a single entryway.

Despite the deans’ detailed perusal of freshmen rooming surveys, roommates don’t always need to share uncanny similarities—like a love of trivia or the ability to speak French—in order to get along.

Some people say virtually nothing in their rooming application, making them more difficult to match with other freshmen who share their specific interests, Dingman says. Incoming freshmen request intangible traits like respect, balance, and humor just as often as they list detailed preferences in their rooming questionnaires.

“We had a lot of people this year, more so than in the past, just say: ‘As long as my roommates are kind and respectful, we’ll get along just fine,’” Brown says.