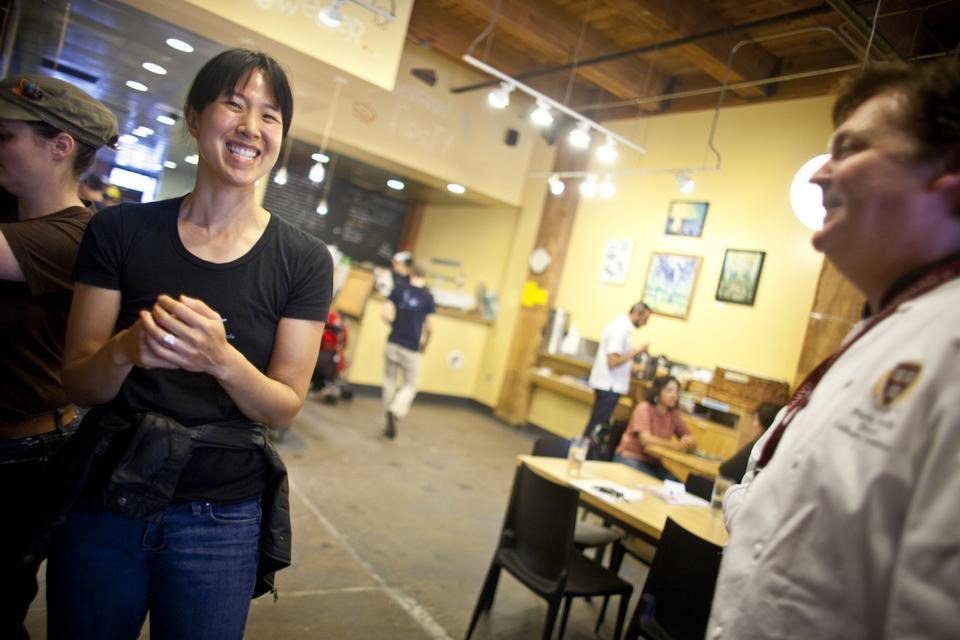 For Harvard's 375th celebration Joanne Chang, an alumna and owner of Flour Bakery, is making a special cake. Culinary director Chef Martin Breslin and Chef Production Manager Richard Spingel picked up one part of the cake at Flour in Boston.
By Jane Seo, Crimson Staff Writer

Once a baker for the Leverett House grill who sold four gooey chocolate chip cookies for a dollar, Joanne B. Chang ’91 will be providing an indulgent treat for Harvardians once again this Friday as the creator of a massive birthday cake for Harvard’s 375th Celebration.

The giant, H-shaped birthday cake will be made of 63 individual red velvet sheet cakes that are 26 by 18 inches each.

The cakes will be laid on top of a 6-foot high platform. The entire cake will be frosted with Swiss meringue vanilla buttercream.

“We thought red velvet was the most appropriate, given Harvard’s color,” said chef Martin T. Breslin, the HUDS director for culinary operations. “And vanilla frosting is always in high demand.”

According to Breslin, a committee in charge of planning the 375th Celebration unanimously agreed that Chang would be an ideal candidate to bake the cake.

“Joanne is a terrific baker, and we know the quality of her product will be delicious,” Breslin said, emphasizing Chang’s focus on meticulously selecting her ingredients.

Breslin first met Chang in 2007 on the Food Network’s “Throwdown with Bobby Flay,” when he served as a judge for the show and Chang appeared as a challenger. In the episode, Chang triumphed over Flay with her “Famous Stick Buns.”

Breslin said the committee initially had a number of ideas for the celebratory cake, including an architectural design. But because architectural cakes are difficult to serve—and full of icing, which obscures the taste of the cake itself—Breslin said the committee decided to commission a simple, yet delicious, cake for the celebration. Chang was selected for the job soon thereafter.

With a degree in Applied Math: Economics under her belt, Chang spent two years as a management consultant before entering the culinary world.

“I wanted to try cooking to see what it’s like to work at a professional kitchen,” Chang said.

Her career began with a stint as a cook, who specialized in cold foods, at Biba Restaurant in Boston. However, Chang said she was not completely satisfied with the chaotic nature of working to prepare orders quickly during the restaurant’s bustling meal times.

Chang followed her sweet tooth instead, deciding that work as a pastry chef might better suit her tastes.

She took a job as an assistant to the head baker of Bentonwood Bakery in Newton and as a pastry chef at Rialto in Cambridge. Then, in 1997, Chang was hired to work in the cake department of the critically-acclaimed Payard Patisserie and Bistro in New York City.

Chang returned to Boston a year later to pursue her dream of opening up her own pastry shop. In September 2000, Chang opened Flour, a bakery and café, in Boston. She is currently the owner of three branches of Flour as well as Myers + Chang restaurant, which she operates with her husband.

Chang said she enjoys the creative aspects of cooking, and producing something that goes directly to the customer.

“Baking has a clear, direct gratification,” she said.

Chang added that she began baking the 375th Anniversary cake several weeks ago, baking two sheets of cakes every other day. The cakes are delivered and stored at a Harvard kitchen, where they are kept at a very low temperature in order to maintain their quality.

The final cake, which is expected to feed up to 5,000 people, will be situated in Tercentenary Theater, and will be served to guests throughout Harvard’s 375th birthday celebration. Desserts prepared by local vendors will also be served.

In addition, the event will include a musical performance by Yo-Yo Ma ’76 and an open bar for all individuals 21 or older.

—Staff writer Jane Seo can be reached at janeseo@college.harvard.edu