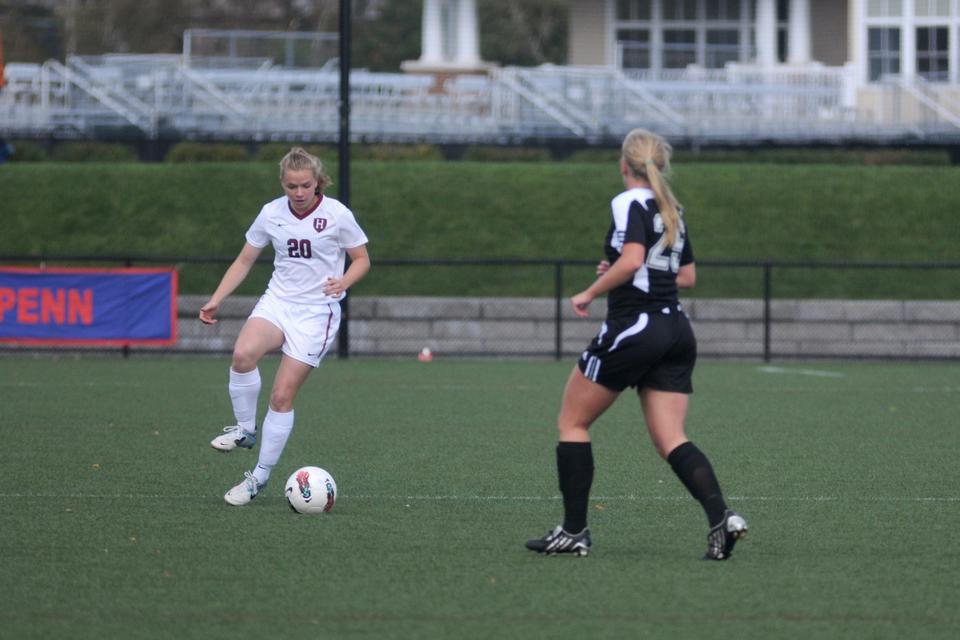 Freshman Lauren Urke, pictured above in previous action, came to Harvard with two strengths: soccer and music. Although she dons a Crimson jersey, she also brought her violin to continue both passions.
By Shayna Price, Contributing Writer

It’s unusual for a defender to dribble all the way up the soccer field and score a goal or give an assist, but what’s even more unusual about freshman Lauren Urke is that she’s just as talented with her hands as she is with her feet.

Urke took private lessons and was also involved in the Greater Twin Cities Youth Symphony in her Minnesota hometown.

“She’s obviously very passionate about her music, which is awesome,” sophomore goalie Jessica Wright said. “She plays violin as she plays soccer: to the best of her abilities.”

In addition to her private violin lessons twice a week and symphony rehearsal once a week, Urke put in an average of five additional hours of individual practice time.

With two time-demanding activities, conflicts between a practice, game, rehearsal, or concert were inevitable.

Urke’s toughest decisions came when she had to decide whether she was going to let down her soccer teammates or let down her orchestra.

But, when it came down to it, soccer was always her number one priority.

“Violin has always been something that I love to do in my free time,” Urke said. “I treated it as something extra. I never thought of myself as being a performing musician.”

Urke, who was named Ivy League Co-Rookie of the Week on Sept. 12, has tallied one goal and two assists so far for the Harvard women’s soccer team.

Urke decided to hold off on joining a Harvard orchestra or music group until the spring when she’s in her offseason.

“I originally didn’t even bring my violin with me to college, which was very bad,” Urke said. “I had my mom bring it up for me over Parents Weekend ... I missed it!”

The Crimson players had only heard Urke’s musical talent through a YouTube video of her playing Édouard Lalo’s fifth movement of “Symphonie Espagnole,” a very complicated piece that took her two months of practicing four hours a day to learn.

When Urke was finally reunited with her violin, she gave a live mini-concert for her teammates in the locker room after practice last week.

“I was really impressed that she could play any pop song—we could tell her a pop song, and she could hear it and then be able to play it,” Wright said. “I was kind of surprised by the Justin Bieber song!”

Urke’s ability to play by ear is in part innate and in part due to the Suzuki training method she received as a youngster, which taught her to discern which notes are being played before reading the sheet music for the song.

Playing the violin might have taught Urke more than she thought.

“You have to pass the ball to where they are going to be, not where they are at,” Stenson said. “That takes planning ahead. Being able to read your teammates, that is very musical, very right brain, very whole picture-like.”

“There are many skills in soccer and violin that require a great deal of repetition and practice,” Stenson added. “Like they say, 10,000 touches on the ball ... the Suzuki teaching method is 10,000 repetitions of the skill, and you can master that skill.”

“In both, dedication and hard work go so far,” Urke said. “How far you can push yourself [goes] intrinsically [with] constantly trying to get better.”

Urke’s strong passion for the violin is one that she has shared with others. Through a mentoring program that provided free classes to economically disadvantaged students in middle school, Urke instilled excitement for playing the violin in many of her students.

“It shows dedication on her part,” freshman forward Erika Garcia said. “Anything she does, she does well.”

Despite her prowess in both activities, Urke never lets one eclipse the other.

“Soccer and violin have always been the things I love to do and the things I fill my time with because they make me happy,” Urke said.