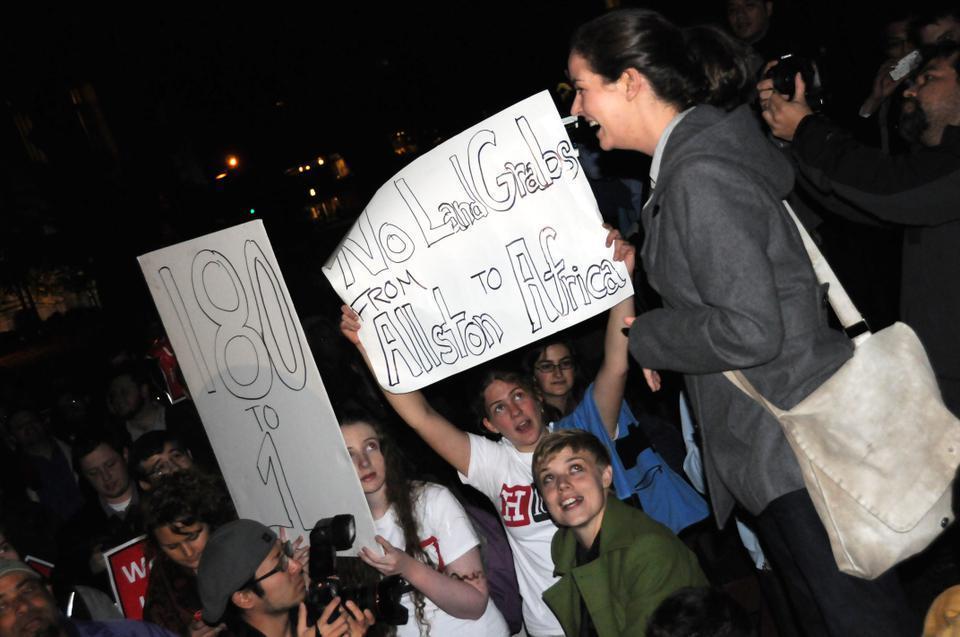 GSAS student Marissa M. Egertsrom teaches the basics of "General Assemblies" while facilitating a conversation Wednesday night on the Law School campus.
By Jose A. DelReal

A tent city was hastily constructed in front of University Hall Wednesday night during a tense dialogue between “Occupy Harvard” protesters and Dean of Student Life Suzy M. Nelson.

The occupation followed a protest on campus involving more than roughly 350 participants sympathetic to the Occupy movement, during which Harvard Yard was shut down by Harvard University Police officers and Securitas guards.

The protest was intended to convey disapproval of the University’s perceived complicity in growing income inequality across the country. Participants included students, staff, faculty, and community members.

Around 7 p.m., protesters were met with increased security that would prevent Boston residents who were not Harvard affiliates from entering the Yard.

“I think it’s absurd. Do we really need eight guards per gate?” said Nicandro G. L. Iannacci ’13, who has participated in other Occupy events. “The idea that the only people allowed here to have this conversation are members of the Harvard community, specifically, is wrong. Why not welcome more people in?”

In response to the limited access to the Yard, demonstrators relocated to the Harvard Law School campus. As they marched past freshman dorms, they chanted, “Out of your rooms and into the Yard,” rallying the students in the dorms to join.

After a general assembly, protesters left the Law School campus and tried to re-enter the Yard to set up a tent city, but Securitas guards prevented demonstrators from entering by locking the gates.

In a tense exchange, students tried to push their way into the Yard—some holding up their Harvard IDs—while guards pushed back to prevent protesters from breaking through the gates.

Protesters moved to Mass. Ave, attempting to enter the Yard through the Widener Library entrance, but were rebuked by HUPD and Securitas guards.

As protesters tried to enter the Yard through the Widener entrance, confused bystanders watched from across the street.

“I think it’s a little ridiculous. People need to get in, people have things to do.

Harvard is being a little overcautious,” said Leonie A. Oostrom ’15, who was not participating in the protest but lives in the Yard. “I think it’s almost dangerous to have the gates closed.”

Several gates were opened and closed throughout the night, causing confusion among the freshmen who did not know where they could enter, if at all.

After hours of attempting to get into the Yard, students with Harvard IDs were allowed to re-enter in small numbers. Once inside, a group of about 40 protesters convened in the basement of Thayer Hall to plan how they would construct the tent city.

At about 10:30 p.m., roughly 120 demonstrators—mostly Harvard students—linked arms and created a circle in front of the John Harvard Statue within which they began to assemble the tents.

As the protesters were constructing their tent city, Nelson emerged and attempted to convince the occupiers to move the tents to Tercentenary Theatre, where they would be less disruptive.

Protesters rejected her suggestion but said they would consider relocating the tents if they become too troublesome.

Nelson ultimately agreed to allow the tent city to camp in front of University Hall and asked to meet with the protesters on Thursday regarding the future of the occupation. The protesters’ terms for the meeting include adhering to their principle of consensus-based decision making and inclusive participation.

“I would like this meeting to be the beginning of a conversation,” Nelson said.

Harvard Kennedy School Lecturer Timothy P. McCarthy ’93 said that relocating the protest to the Law School campus earlier in the night was a way of assuring that the demonstrators could assemble and make their statement heard.

“This country was founded on the freedom of speech, of assembly, of petition, of religion, and of the press. Tonight, the country seems to deny the most essential freedom,” McCarthy told a crowd while at the Law School. “The press could not get in, so the people who speak will come to a place where the press can hear us, where we can be heard, where we can be seen.”

Throughout the night, various protesters—including several Harvard employees—voiced their concerns about economic conditions across the country. Other concerns included stalled contract negotiations and employment benefits.

“I’m here because I think this is one of the most important social uprisings in modern American history,” McCarthy said. “I believe deeply that this is a moment in America’s history that requires such a people’s movement. I’m happy to be part of it.”

He also said that the University has a responsibility to the community.

“If Harvard is going to be a place that produces people with power, then Harvard must be an institution where the public good is more important than private profit,” McCarthy said. Earlier, he told a crowd that “Harvard has economists that teach us that profits are more important than people.”

Protesters said that they wanted to bring a public dialogue to Harvard regarding the University’s role in the country and, more broadly, the world.

Sahil A. Khatod ’14 shared Atkinson’s view about the University’s responsibility.

“My frustration with Harvard has to do with the fact that there isn’t a dialogue about what’s happening off campus,” Khatod said.

–Staff writer Jose A. DelReal can be reached at jdelreal@college.harvard.edu.