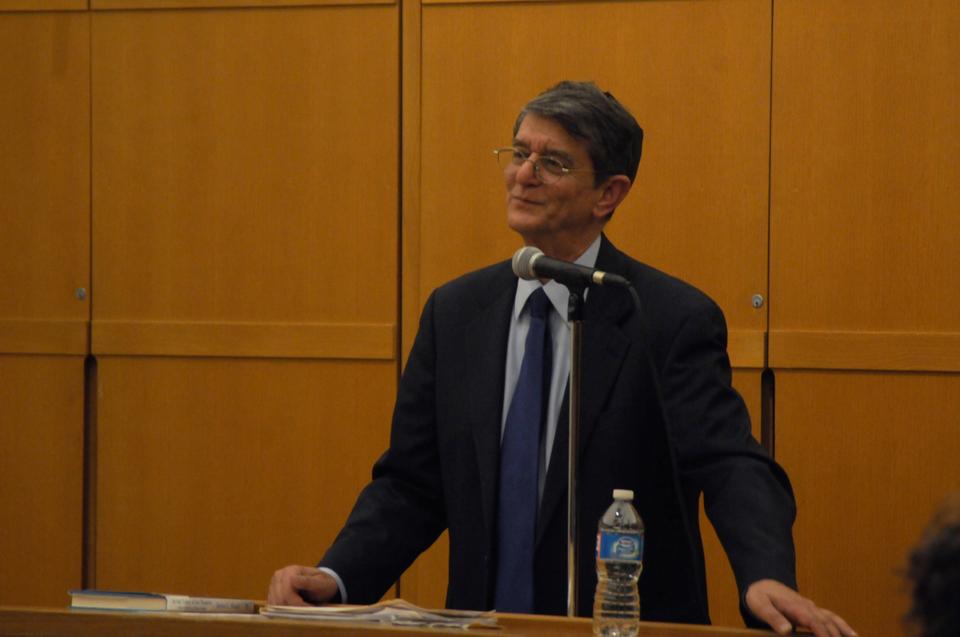 James Kugel spoke about his new book, “In the Valley of the Shadow: On the Foundations of Religious Belief,” at Harvard Hillel last Tuesday.
By Yair Rosenberg, Crimson Staff Writer

Not many authors, let alone world-renowned scholars, would admit that the title of their latest book is based on a mistake. But James Kugel, former Starr Professor of Hebrew Literature at Harvard and now Professor of Bible at Bar Ilan University in Israel, is quite forthright about it. Speaking at Harvard Hillel last Tuesday about his new book “In the Valley of the Shadow: On the Foundations of Religious Belief,” Kugel carefully detailed the philological and historical flaws in the King James Bible’s rendering of his book’s titular phrase, drawn from Psalms 23:4. With a self-deprecating smile, he then posed the obvious question to himself: “If you’re so smart, why did you put it in the title?” Because for Kugel, ‘meaning’—including that of biblical verses—is more about human truths than historical ones. “I liked [the mistranslation] because it really seems to describe the human condition,” he explained. “We walk in the shadow of death in the sense that we don’t like to think about it ... and then one day, suddenly it’s not in the shadows anymore, it’s right there.”

Kugel’s misnomered meditation on religion is thus a deeply human one—part scholarship, part personal confession. No mere academic excursion, “In the Valley of the Shadow” is structured around Kugel’s own bout with cancer. It is a self-described “ramble,” jumping from topic to topic and story to story more as a kind of stream of consciousness than a scholarly essay—a conversation rather than a dissertation. References to the Bible, Arabic legends, the Aeneid, Homer, modern philosophers, anthropologists, and sociologists are intertwined with profoundly personal reflections on mortality—as well as intimate emails from Kugel’s own friends who died of cancer while he was writing the book.

At Hillel, Kugel read passages from “In the Valley of the Shadow” aloud, allowing the eclectic tome to speak for him, and then fielded questions from an audience of students and former colleagues. Religion, he argued, is not about comfort or conformity, as many critics and adherents have contended, but rather about recognizing one’s place in the universe—in relation to God, friends, family, and community. Kugel calls this “living within our borders.” It is a way of being which he feels has been lost in today’s highly individualistic and atomized modern society.

Though “In the Valley of the Shadow” treats religion as a general phenomenon, rather than any particular faith, Kugel traced the genesis of his thinking about religion to some of his earlier work on Jewish thought, particularly his little-known book “On Being a Jew.” Kugel—a self-identified Orthodox Jew who sports a large black yarmulke—wrote “On Being a Jew” as a sort of guide to Judaism for the students who would frequently accost him after class at Harvard with questions about the faith. The book’s approach to holiness—that human beings must make space for it in their lives, that “God is wherever you let him in” —largely informs Kugel’s broader understanding of the character of the religious experience.

For some at the event, Kugel’s mix of memoir and metaphysical musing proved movingly compelling. “I was struck by his warmth and ability to interweave his personal story of confronting death with theological insights,” said Jason W. Schnier ’11, adding that “what makes Kugel so prescient is that he presents a religious philosophy that is fundamentally different from the Western, and especially the Harvard, model.” Other attendees, however, found the professor’s unusual style to be more problematic. “I appreciated Kugel’s sincerity in discussing his response to a difficult life experience,” said Daniel J. Frim ’14, “However, I don’t know whether Kugel’s response to hardship is informative in scholarly discourse aimed at tracing the origins of religion. I feel as if any comparison between the existential theological musings of modern man and primitive cultic belief is risky.”

The intended audience of Kugel’s book is as colorful and multifarious as its contents. Kugel was clear in his presentation that “In the Valley of the Shadow” is not intended to evangelize or convert, and despite the fact that it creates a dialogue with New Atheist writers like Daniel Dennett, it is not meant as a rebuttal to their works. Indeed, the book stands as a critique to many modern religionists as much as their opponents—and at Hillel, Kugel had some soft-spoken but serious criticism for his fellow Orthodox Jews, whom he described as moving in an overly “isolationist” direction. “I really don’t approve of that,” he said towards the end of his talk. “I really think we ought to have an Orthodox Judaism that is open to science and whatever else we can find out.” Seen in this light, the unconventional mix of the academic and the intimate in “In the Valley of the Shadow” seems wholly sensible. For Kugel, scholarship is personal.

—Staff writer Yair Rosenberg can be reached at yrosenb@fas.harvard.edu.